Topic 9.8 Reconstruction of the Expansion of C4 Taxa

Topic 9.8 Reconstruction of the Expansion of C4 Taxa 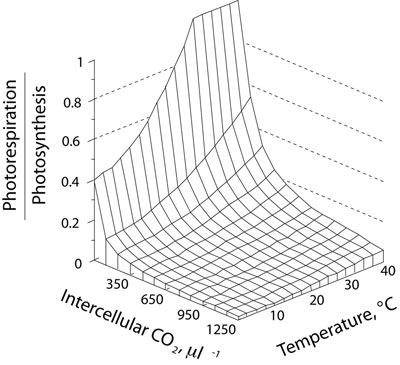 Web Figure 9.8.A   Changes in the ratio of photorespiration-to-photosynthesis as a function of both CO2 concentration and temperature for a plant with C3 photosynthesis. (Courtesy of Ehleringer and Cerling 2001.)

As described in Chapter 9 of the textbook, the rate of photorespiration in a leaf increases because RuBP carboxylase is more likely to react with O2 instead of CO2 as temperature increases and/or CO2 decreases. The result of an increase in photorespiration is a decrease in photosynthetic quantum efficiency. This leads to environmental conditions where C4 plants are favored over C3 and vice versa. 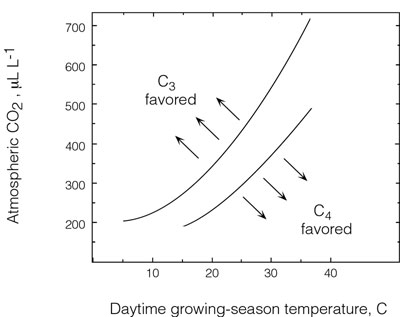 This model leads to predictions that the abundances of C3 and C4 plants should vary spatially (as a function of latitude as discussed in Web Topic 9.3) and as a function of atmospheric CO2 history (as discussed in Web Topic 9.5). The secret to evaluating this model is to go back and look at plant fossils over time and to relate photosynthesis pathway with prehistoric atmospheric CO2. This is a difficult task.

Reconstruction of the expansion of C4 plants over the past 10–15 million years can be a challenge, because individual plants are not well recorded in the fossil record in many locations. Most plant fossils are thought to have formed as a result of submersion into an anaerobic, aquatic environment. The vast majority of plants do not become fossils under these conditions, but instead are decomposed by microbial activities leading to diminished numbers of fossils that we can use to reconstruct the expansion of C4 plants over time. However, there are good proxies.

Carbon isotope ratios (δ13C) of animal tissues reflect the foods that they ate. For modern animals, it is possible to choose from among, hair, muscle, bone collagen, and tooth enamel for isotope analyses in order to determine the proportions of C3 and C4 food sources in their diets. Hair provides a sequential record of the animal’s diet during the time of hair production. Muscle and bone collagen analyses provide an integrated measure of the animal’s current diet as shown in Web Figure 9.8.C below. 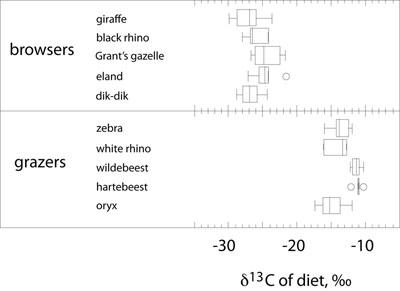 The δ13C of animal teeth faithfully record the carbon isotope ratios of food sources during the period of tooth development. The carbon in tooth enamel is actually carbonate that has condensed from CO2 that was produced as a byproduct of metabolizing food. After an animal has died and decomposition has occurred, about the only remaining tissue that remains and preserves the C3/C4 dietary signals is the enamel in the animal’s teeth.

For many herbivores, such as cows and horses, tooth growth is continuous and provides a longer-term dietary record than for animals with a fixed tooth growth period (such as humans). As teeth are preserved for millions of years, δ13 of tooth enamel can be used to reconstruct the abundances of C3 and C4 plants eaten by mammalian grazers over extended time periods. In the graphic below, we plot the frequency distributions of modern animal teeth with that observed for C3 and C4 plants: 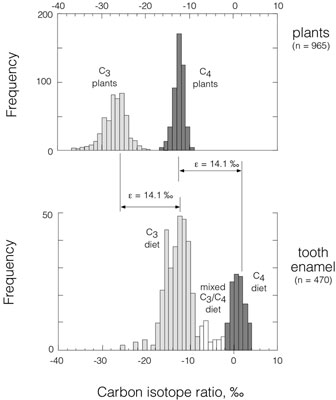 Web Figure 9.8.D   Frequency histograms of leaves with C3 and C4 photosynthesis and of the teeth of herbivores feeding off those plants. (Courtesy of Ehleringer and Cerling 2001.)

Note that there is an “ε” offset of 14.1‰. This is the isotope enrichment associated with CO2 condensing to form carbonate. Now we have a tool—the carbon isotope ratio of animal tooth enamel will record the abundance of C3 versus C4 food sources.

Thure Cerling and his colleagues at the University of Utah have applied the “tooth enamel” tool to reconstruct the historical abundances of C3/C4 plants. Their results are very interesting, as shown in Web Figure 9.8.E below. 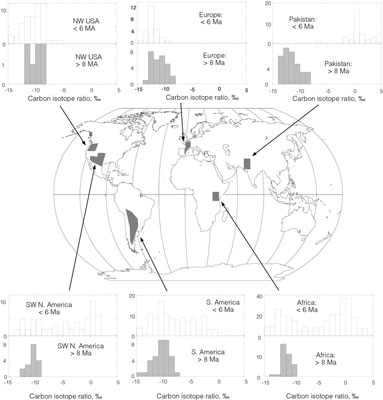 Web Figure 9.8.E   Frequency histograms of the carbon isotope ratios of tooth enamel of herbivores in several different regions of the globe. The isotope ratio data are separate into two time periods to illustrate the emergence of C4-dominated ecosystems in the warmer regions about 6–8 million years ago. (Courtesy of Ehleringer and Cerling 2001.)

Until 8 million years ago, C4 plants were not an important part of ecosystems. Then, between 6 and 9 million years ago, C4 plants became important parts of many ecosystems, particularly at tropical and semi-tropical latitudes. These results are consistent with model predictions above. C4 photosynthesis is predicted not to occur on Earth until the atmospheric CO2 level falls below a critical threshold value. Even then it should appear first in those locations with the warmest temperatures during the growing season.

There is also extensive evidence presently to show that fluctuations in the atmospheric CO2 concentration values between glacial (180 ppm) and interglacial (280 ppm) periods were large to influence the local abundances of C3/C4 plants. Shown below (Web Figure 9.8.F) are the time series analyses of carbon in bog in tropical Africa. At about 10,0000 to 12,000 years ago, the vegetation surrounding these bogs switched from being dominated by C4 plants to being dominated by C3 plants. This shift is evident by the dramatic change is carbon isotope ratios of materials feeding into the bog, especially at the time that the glacial period ended and we entered our current inter-glacial period. 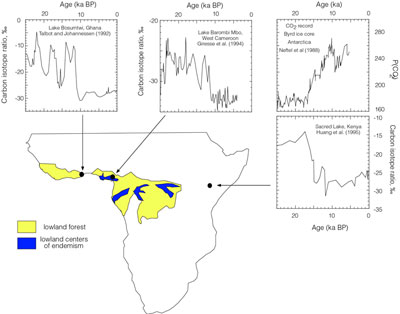 Web Figure 9.8.F   Carbon isotope ratios of bog materials deposited by the surrounding vegetation as a function of time in three different lakes systems in tropical Africa. Note that about 10,000–12,000 years ago, there was a shift from C4-dominated to C3 dominated ecosystems. Shown also is a reconstruction of the Byrd ice core data showing that the increase in atmospheric CO2 coincides with the changes from C4-to C3-dominated ecosystems. (Courtesy of Ehleringer and Cerling 2001.)

Together these historical pieces of information paint an interesting history. The C3 photosynthetic pathway dominated for much of Earth’s history. And it is only relatively recently in Earth’s (6–8 million years ago) history that we have seen an expansion of C4-dominated ecosystems. What the future holds is unclear, since anthropogenic burning of fossil fuels is rapidly increasing in atmospheric CO2 to levels far exceeding those observed on Earth over the past 1 million years.