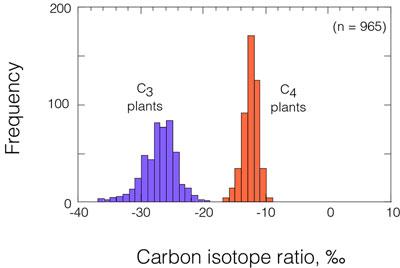 Adulteration is the substitution of a cheaper food substance or compound with another. Carbon isotopes are frequently used to detect the substitution of C4 sugars for C3 food products, such as the introduction of sugar cane into honey to increase yield. One easy way to detect this adulteration is to examine the jams and jellies that are found in restaurants. Below are the results of a survey conducted as a science project by Jeff Ehleringer when he was a young man in junior high school. Jeff collected jams and jellies every time he went into a restaurant. He had the opportunity to collect jams and jellies from across the western United States and in parts of Europe as well. 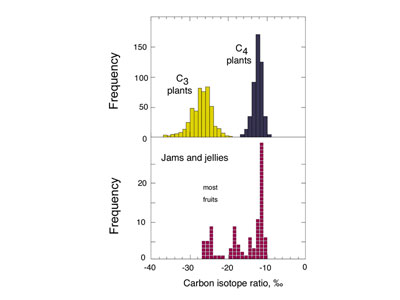 Web Figure 9.7.B   Variations in the carbon isotope ratios of jams and jellies that were collected across the United States and in various countries in western Europe. (Courtesy of Ehleringer, unpublished.)

The results shown above are interesting and indicate that adulteration has taken place in some of the samples. The fruits that go into producing jams and jellies are all C3 fruits (grapes, strawberries, raspberries, orange, apricots, peaches, etc.) One subgroup of the jams and jellies appear to have carbon isotope ratios similar to the stable isotope ratios of C3 plants, from which they were supposed to have been derived. These were all samples that Jeff had collected in Europe, where there are authenticity laws regulating what materials can go into making a processed food such as a jelly.

In contrast, the vast majority of the jams and jellies had carbon isotope ratios consistent with those of C4 plants. Yet, fruits are not from C4 plants but instead are produced from C3 plants. These are the adulterated jellies, most likely produced largely from sugar syrup and food flavoring with very little food used in the process. These substitutions are legal in the U.S., because here, we do not have authenticity laws with respect to food production. A third small subgroup consists of jams that were made of 50/50 C3/C4 food sources. It turns out that these were the more expensive jams and jellies.

There are many other food products that are tested for their carbon isotope ratios to detect adulteration. Common among these are fruit juices, vanilla (vanilla beans come from CAM plants), beer (wheat and barley are C3), and alcoholic beverages.