Topic 9.3 The Geographic Distributions of C3 and C4 Plants

Topic 9.3 The Geographic Distributions of C3 and C4 Plants

Among the 15,000+ species with C4 photosynthesis, it is most common in grasses and sedges, less common in herbs and shrubs, and not found in trees (with a single Hawaiian tree exception, Euphorbia forbesii). Climate is a major factor influencing the natural distributions of C3 plants and C4 grasses. Here, we talk about the two most important climate parameters influencing plant growth: water and temperature. Clearly plants will not grow in the absence of water, so the important factor influencing photosynthetic pathway distribution becomes the temperature during the growing period. Based on many systematic surveys of the natural vegetation across the globe that have been accumulating over time, a clear picture is emerging. C4 taxa are found in warm to temperate environments and are uncommon in cool to cold climates (see Figure 9.17 of the textbook). Below we construct a global map that describes the general abundances of C3 and C4 taxa on different continents. 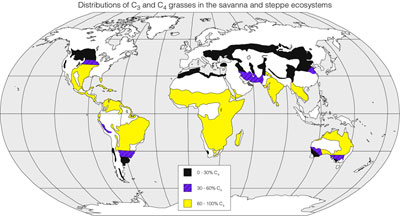 Web Figure 9.3.A   A map of the geographical abundances of C3 and C4 grasses in the savannas and grasslands of the world. (Courtesy of Ehleringer, Cerling, and Dearing 2005.)

Notice that C4 taxa are not very common in tropical regions (0–20° latitude), because dense tropical forests tend to shade out C4 grasses. The C4 taxa are most common away from the tropics in the savanna and steppe regions; their abundances tends to diminish south of the desert zones (generally 30–40° latitude).

Climate can be presented along an axis of an increasing of precipitation relative to evaporative water loss. At the upper, wetter end of this gradient, we would find the forests. At the drier end, where precipitation is low relative to evaporative demand, we see the deserts. In Web Figure 9.3.B, we see that these different vegetation zones reflect variations in the ratios of precipitation-to-evaporation. C4 plants are most common in this semi-arid region. 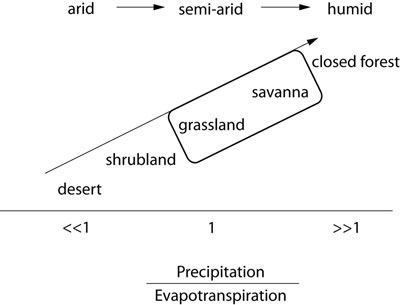 Web Figure 9.3.B   A plot of the vegetation types that are expected to occur along a climate gradient estimated by the ratio of the incoming precipitation to the potential evaporation rate. (Courtesy of Ehleringer, unpublished figure.)

In deserts with wet monsoon summers, such as in central Africa, the sub-Indian continent, and western North America, C4 taxa are abundant. In deserts that receive winter rainfall, such as deserts in Asia and North Africa, there are few C4 taxa. In North America, this regional influence of summer precipitation is most visible in the southwestern United States where there are large differences in precipitation associated with the Arizona monsoon boundary, as shown in Web Figure 9.3.C. 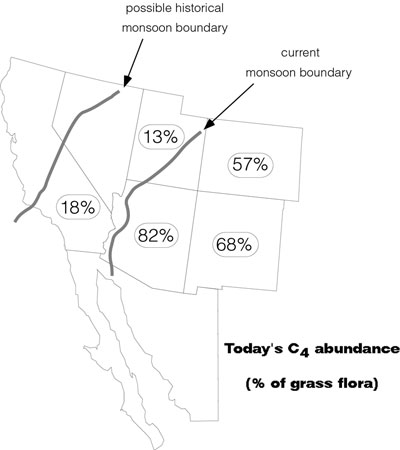 Web Figure 9.3.C   Calculations of the percentage of the grass species that have C4 photosynthesis in different states of the western United States. Note that the presences of summer rain influences C4 abundance. C4 plant tend to occur in warm, summer wet regions. (Courtesy of Ehleringer, Cerling, and Dearing 2005.)

Human activities and disturbances by animals will influence the distribution of C3 and C4 taxa within savannas and grasslands. This reflects the role of disturbances, such as grazing and fires, on the importance of trees on the landscape. 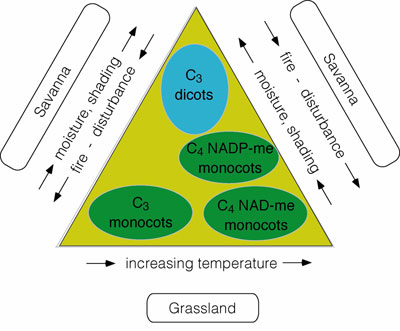 Today, agricultural practices result in C4 plants growing outside of the distributions shown above. This results from the extensive planting of corn, sugarcane, and millet in both tropical and temperate regions. 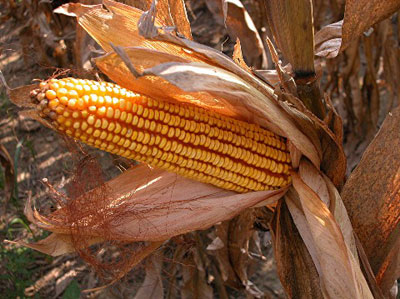 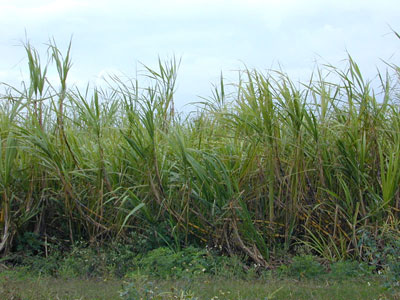 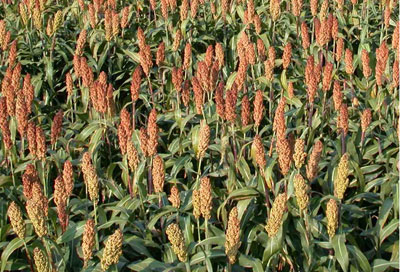