Three light properties are especially important when working with light: amount, direction, and spectral quality. The first two parameters, amount and direction, are important with respect to the geometry of the part of the plant that intercepts the light. Is the plant part flat or cylindrical? For a flat leaf, a planar light sensor is the most appropriate, and the amount of energy that falls on a flat sensor of known area per unit time is quantified as irradiance (Web Table 9.1.A). Units can be expressed in terms of energy, such as watts per square meter (W m-2). Time (seconds) is contained within the term watt: 1 W = 1 joule (J)s-1. The energy of a photon depends on its frequency, as expressed by Planck’s law (see textbook Equation 7.2).

Web Table 9.1.A   Concepts and units for the quantification of light.

Amount of light. Recall from textbook Chapter 7 that when considered as a wave, light has a wavelength and a frequency. Light can also be thought of as a stream of particles, photons, or quanta. In this case, units can be expressed in moles per square meter per second (mol m–2 s–1), where "moles" refers to the number of photons (1 mol of light = 6.02 × 1023 photons, Avogadro's number). This measure is called photon irradiance.

Quanta and energy units can be interconverted, provided that the wavelength of the light is known. The energy of a photon is related to its wavelength as follows:

where λ is expressed in nanometers. From this equation we can see that a photon at 400 nm, which is in the blue region of the spectrum, has twice the energy of a photon at 800 nm, from the infrared region of the spectrum. A photon of 400 nm light contains 4.97 × 10–19 J. On the other hand, the 800 nm photon contains 2.48 × 10-19 J. Stated differently, the higher the wavelength of a photon, the lower its energy, as indicated by the larger denominator in the equation.

Direction of light. Turning our attention to the direction of light, light can strike a flat surface directly from above or it can strike the surface obliquely. When light deviates from perpendicular, irradiance is proportional to the cosine of the angle at which the light rays hit the sensor (Web Figure 9.1.A). Thus, irradiance is maximal when light strikes a surface directly from above, and it decreases as light becomes more oblique—similar to the situation with a typical leaf. Sensors that correct for the angle of incidence of light are said to be cosine corrected. 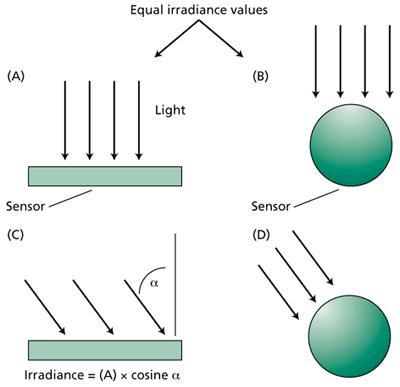 Web Figure 9.1.A   Irradiance and fluence rate. Equivalent amounts of collimated light strike a flat irradiance-type sensor (A) and a spherical sensor (B) that measure fluence rate. With collimated light, A and B will give the same light readings. When the light direction is changed 45°, the spherical sensor (D) will measure the same quantity as in B. In contrast, the flat irradiance sensor (C) will measure an amount equivalent to the irradiance in A multiplied by cosine of the angle α in C. (After Björn and Vogelmann 1994.)

There are many examples in nature in which the light-intercepting object is not flat (e.g., complex shoots, whole plants, chloroplasts). In addition, in some situations light can come from many directions simultaneously (e.g., direct light from the sun plus the light that is reflected upward from sand, soil, or snow). In these situations it makes more sense to measure light with a spherical sensor that measures light omnidirectionally (from all directions).

In contrast to a flat sensor, a spherical sensor is equally sensitive to light from all directions (see Web Figure 9.1.A). Depending on whether the light is collimated (rays are parallel) or diffuse (rays travel in random directions), values for fluence rate versus irradiance can be quite different from one another. They are equivalent only under special conditions (for a detailed discussion, see Björn and Vogelmann 1994 and Kirk 1994).

The flat sensor measurement of photosynthetically active radiation (PAR, 400 to 700 nm) may also be expressed on the basis of energy (W m–2) or quanta (mol m–2 s–1) (McCree 1981). It is important to note that PAR is an irradiance-type measurement. In research on photosynthesis, when PAR is expressed on a quantum basis, it is often given the special term photosynthetic photon flux density (PPFD). However, it has been suggested that the term "density" be discontinued (Holmes et al. 1985) because within the International System of Units (Système Internationale d'Unités, or SI units) "density" can mean area or volume. Moreover, area is contained within the term flux. PPFD has in some cases been shortened to PPF, but it is not clear whether this abbreviation represents an irradiance-type or a spherical measurement.

When light moves through water such as lakes or oceans, it scatters in such a way that its direction of travel is randomized. As a result, aquatic photosynthetic organisms can receive light simultaneously from above, below, and the sides. In oceanography and limnology, the light that travels from the water surface toward the bottom is called downwelling irradiance, and the light that travels in the reverse direction is called upwelling irradiance.

Before the advent of specialized light meters suitable for plant physiology, light was measured in lux or foot-candles. These measurements are based on the perception of light by the human eye, which is maximally sensitive to light within the green region of the spectrum, at 555 nm. Sensitivity falls off on both sides of this wavelength and approaches zero within the blue and red, wavelength regions that are important for photosynthesis. Thus, lux and foot-candles are of little use in plant physiology. These units can be converted to the units of irradiance and fluence rate, but only if detailed knowledge about the spectral quality of the light is available, something that can be obtained only by use of an instrument called a spectroradiometer, which measures the amount of light at each wavelength.

In summary, when choosing how to quantify light, it is important to match sensor geometry and spectral response with that of the plant. Flat, cosine-corrected sensors are ideally suited to measure the amount of light that strikes the surface of a leaf; spherical sensors are more appropriate in other situations, such as when studying a chloroplast suspension or a branch from a tree.

How much light is there on a sunny day and what is the relationship between PAR irradiance and PAR fluence rate? Under direct sunlight, PAR irradiance and fluence rate are both about 2000 µmol m–2 s–1, though higher values can be measured at high altitudes. The corresponding value in energy units is about 400 W m–2. When light is completely diffuse, irradiance is only 0.25 times the fluence rate.