There are three variations of the basic C4 pathway (Web Figure 8.9.A). The variations differ principally in the C4 acid transported into the bundle sheath cells (malate or aspartate) and in the manner of decarboxylation. 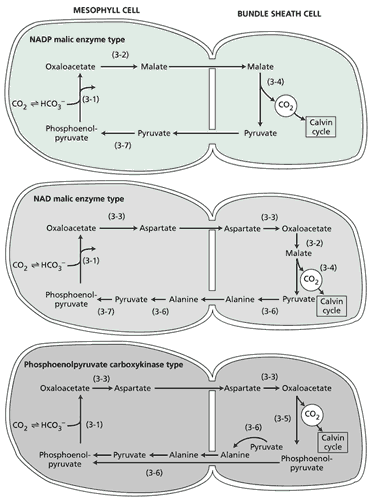 Web Figure 8.9.A   The three variants of the C4 photosynthetic carbon cycle. The variants differ principally in (1) the nature of the four-carbon acid (malate or aspartate) transported into the bundle sheath cell and of the three-carbon acid (pyruvate or alanine) returned to the mesophyll cell and (2) the nature of the enzyme that catalyzes the decarboxylation step in the bundle sheath cell. The three variants are named after the enzymes that catalyze the decarboxylation reactions. Representatives of each variant include maize, crabgrass, sugarcane, sorghum (NADP malic enzyme); pigweed, millet (NAD malic enzyme); guinea grass (phosphoenolpyruvate carboxykinase).

The variations are named after the enzymes that catalyze the respective decarboxylation reactions: NADP-dependent malic enzyme (NADP-ME) found in chloroplasts; NAD-dependent malic enzyme (NAD-ME) in mitochondria; and phosphoenolpyruvate carboxykinase (PEP-CK) in the cytosol. The discussion in the text traces the route of carbon for the NADP-ME type, such as sugarcane or corn.

Another process localized in the mesophyll chloroplast of all three C4 variants is the reduction of 3-phosphoglycerate to triose phosphates, which occurs within the Calvin cycle proper in C3 chloroplasts. In contrast, all C4 variants export 3-phosphoglycerate from the bundle sheath for reduction in the mesophyll chloroplast. After reduction, the triose phosphates are transported back to the bundle sheath chloroplasts, for use in the operation of the Calvin cycle there.

One possible reason for this remarkable split of the Calvin cycle between the bundle sheath and the mesophyll chloroplast is to restrict electron transport activity and oxygen evolution in the bundle sheath, and thus avoid oxygen levels that would favor photorespiration (Bowyer and Leegood 1997). The transport of metabolites of the C4 pathway is accompanied by movements of protons and other ionic species in order to maintain pH and charge balance.