Thioredoxins are 12 kDa proteins that have a catalytically active disulfide group and occur in most if not all organisms. Thioredoxins have an active site with two redox-active cysteine residues (-Trp-Cys-Gly-Pro-Cys-). The active site is located on the first α helix of a motif consisting of three flanking α helices and a four-stranded β sheet that has been identified in several redox-active proteins (Web Figure 8.6.A). 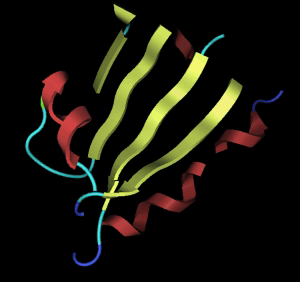 Web Figure 8.6.A   Thioredoxin-2, from Anabaena. The alpha-beta-alpha topology of the protein is shown. (M.O.E., the Molecular Operating Environment from Chemical Computing Group, Inc.)

The oxidized form of each thioredoxin contains a disulfide (—S—S—) bridge that is reduced to the sulfhydryl (—SH) level by either reduced ferredoxin or NADPH (see textbook Figure 8.6). The reduced form of thioredoxin is an excellent catalyst for the reduction of intramolecular (intrachain) disulfide bonds of proteins that are only slowly reduced by glutathione or glutaredoxin, the other major cellular sulfhydryl reductants. Upon reduction, the disulfide bond of enzymes targeted specifically by a thioredoxin causes a dramatic shift (usually increase) in catalytic activity. First observed to activate enzymes of photosynthesis, thioredoxins are now known to play a broad regulatory role in many cell types.

Although only one type of thioredoxin has been detected in bacteria and animals, three well-characterized variants exist in photosynthetic cells. Two of the three (m and f) are located in chloroplasts and can be distinguished from one another on the basis of both primary structure and specificity for target enzymes, the feature that led to their discovery. These two chloroplast thioredoxins are reduced by electrons from excited chlorophyll via ferredoxin and ferredoxin–thioredoxin reductase (FTR), an iron–sulfur enzyme with a catalytically active disulfide group.

In addition to activating enzymes of the Calvin cycle, the ferredoxin–thioredoxin system activates enzymes of other chloroplast processes. Thus, the C4 cycle, photophosphorylation, and mRNA translation are activated by thioredoxin via NADP–malate dehydrogenase, fatty acid biosynthesis, thylakoid-bound ATP synthase (coupling factor), and activator proteins of the 5′ untranslated region of chloroplast mRNAs, respectively. It has been shown that, in addition to its role in C4 plants, thioredoxin-linked NADP–malate dehydrogenase functions in C3 plants in a cyclic process that transports malate synthesized in the chloroplast to the cytosol, where it generates NADH. The oxaloacetate formed in this oxidation is transported back to the chloroplast in exchange for malate by a specific antiporter.

The chloroplast also contains an enzyme, glucose-6-phosphate dehydrogenase, the main regulatory enzyme of the oxidative pentose phosphate cycle (see textbook Chapter 12) that functions in the opposite way than the enzymes of photosynthesis: It is deactivated upon reduction by thioredoxin. By lowering the activity of this enzyme, light inhibits operation of the oxidative pentose phosphate pathway for the breakdown of carbohydrate (see textbook Chapter 12). Chloroplasts thus use thioredoxin to link light to the control of carbon flow through two major opposing carbon pathways (Scheibe 1990; Buchanan 1992; Schürmann and Jacquot 2000).

Thioredoxin m effectively activates NADP–malate dehydrogenase, an enzyme of the C4 photosynthetic carbon cycle and C3 redox shuttle, and deactivates glucose-6-phosphate dehydrogenase. Thioredoxin of the "m" or bacterial, type has been found to regulate other light-dependent chloroplast processes, such as the translation of mRNA.

Plants have a third class of thioredoxin, the h type—located in the cytosol, endoplasmic reticulum, and mitochondrion that is reduced by NADPH in a reaction catalyzed by a flavoprotein enzyme, NADP–thioredoxin reductase (NTR):

The function of thioredoxin h is currently being investigated in several plant systems, including seed, phloem and pollen. In cereals, it has been found to promote the mobilization of carbon and nitrogen of the endosperm early in grain germination. Thioredoxin h appears to act (1) by reducing the major seed storage proteins, thereby enhancing their susceptibility to proteases, (2) by activating a newly discovered type of calcium-linked protease (thiocalsin), and (3) by neutralizing (via reduction of their intrachain disulfide bonds) low-molecular-weight proteins that inhibit enzymes of starch degradation.

Through studies of gene inactivation, thioredoxin h has been identified as a requirement for the development of pollen self-incompatibility and to be a prominent component of phloem. Thioredoxin, again linked to NADP, has also been found to function widely in animal cells in processes ranging from transcription to development of the immune response to embryogenesis.

These biochemical and molecular studies of thioredoxin have led to possible applications in technology and medicine. Thioredoxin may be used to improve foods by lowering allergenicity and increasing digestibility. Ongoing studies have uncovered the potential use of thioredoxin as a marker in diagnosing and monitoring certain human diseases, in neutralizing venom neurotoxins and factors involved in the inflammatory response, and in improving the success of organ transplants. Thioredoxin is an example in which principles learned in basic research are being applied to contemporary societal problems.