Efficient Use of Energy by the Calvin–Benson Cycle

A constant input of energy provided by ATP and NADPH is required to keep the Calvin–Benson cycle functioning to fix CO2. The formation of triose phosphates in the carboxylation and reduction phases of the Calvin–Benson cycle requires both energy (ATP) and reducing equivalents (NADPH) produced in the thylakoid membranes of chloroplasts in the light.
3 CO2 + 3 ribulose 1,5-bisphosphate + 3 H2O + 6 NADPH + 6 H+ + 6 ATP →
6 triose phosphates + 6 NADP+ + 6 ADP + 6 Pi

Under steady state photosynthesis, one sixth of the triose phosphates formed leaves the Calvin–Benson cycle for the net synthesis of starch and sucrose while the remaining five sixths are used to replenish ribulose 1,5-bisphosphate. The regeneration phase requires additional ATP for forming the primary CO2-acceptor.
5 triose phosphates + 3 ATP → 3 ribulose 1,5-bisphosphate + 3 ADP 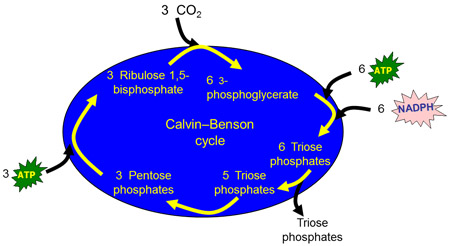 Web Figure 8.4.A   Energy demands for the operation of the Calvin–Benson cycle

On this basis, we can calculate the efficiency of the Calvin–Benson cycle by comparing the energy expended in the synthesis of carbohydrates from CO2 to that derived from the oxidation of NADPH and the hydrolysis of ATP. To this end, the following points must be taken into account:

Hence, the thermodynamic efficiency of the Calvin–Benson cycle is ca. 75% [(2,804/3,648) × 100]. A further inspection of these calculations reveals that the conversion of CO2 to carbohydrates is mostly a reductive process, because the bulk of the required energy comes from NADPH. The oxidation of 12 moles of NADPH releases 2,604 kJ, while the hydrolysis of 18 moles of ATP supplies 522 kJ; thus, 83% [(2,604/3,126) × 100] of the total energy used in the Calvin–Benson cycle comes from the reductant NADPH.

Only photosynthetically active radiation (light within the wavelength range of 400 to 700 nm) can be utilized by plants. On this basis, we can compute the maximum overall thermodynamic efficiency of photosynthesis if we know the energy content of the incident light and the minimum quantum requirement of the photosynthetic process (moles of quanta absorbed per mole of CO2 fixed; see textbook Chapter 7). The fixation of one mole of CO2 in the Calvin–Benson cycle uses two moles of NADPH and three moles of ATP. The minimum quantum requirement is usually calculated to be eight photons per two moles each of NADPH and ATP (minimum quantum requirement is two light quanta per electron, then eight light quanta are used to drive the oxidation of water: 2 H2O → O2 + 4 H+ + 4 e–). An extra light quantum would be required to drive cyclic electron flow for the production of the third ATP needed for the fixation of CO2. Red light at 680 nm contains 175 kJ per mole of photons. Therefore, the minimum light energy needed to reduce six moles of CO2 to one mole of hexose is approximately 6 × 9 × 175 kJ = 9,450 kJ. Given that the synthesis of a mole of hexose requires at least 2,804 kJ, the maximum overall thermodynamic efficiency of photosynthesis is about 29.7% [(2,804/9,450) × 100] of the photosynthetically active radiation.

Thus, the theoretical efficiency for the photosynthetic assimilation of CO2 is 90% when thermodynamic estimations rely on the energy supplied by the substrates, but falls to almost 30% when calculations depend on the energy coming from incident light. This difference indicates that a large proportion of light energy is lost in the generation of ATP and NADPH by the light reactions rather than during the operation of the Calvin–Benson cycle.

The performance of plants under normal growing conditions in the field is, however, actually far below these theoretical values. In general, the developmental stage of plants and environmental factors (e.g., water, mineral nutrients, temperature) collectively tend to lower the yield of photosynthesis. The conversion efficiency for most crops (e.g., potatoes, soybeans, wheat, rice, and corn) typically range from 0.1 to 0.4%. For sugarcane in Texas and Hawaii, where nearly year-round active growth is possible under optimal conditions, the value approaches 2%.

C4 cycle. Thermodynamics tells us that work must be done to establish and maintain every gradient of metabolites. This principle also applies to the operation of gradients of CO2 concentration in the C4 cycle. From a summation of the reactions involved (see textbook Table 8.4), we calculate that the action of NADP-malic enzyme in bundle sheath cells [Malate + NADP+ → pyruvate + NADPH + CO2] (reaction 4) balances the NADPH used by malate dehydrogenase in mesophyll cells for the reduction of oxaloacetate [oxaloacetate + NADPH → malate + NADP+] (reaction 2). On the other hand, the regeneration of the primary CO2-acceptor, phosphoenolpyruvate, in mesophyll cells consumes two additional molecules of ATP to drive two endergonic reactions—catalyzed by pyruvate–phosphate dikinase [Pyruvate + Pi + ATP → phosphoenolpyruvate + AMP + pyrophosphate] and adenylate kinase [AMP + ATP → 2 ADP] (Web Figure 8.4.B). These reactions are complemented by the exergonic hydrolysis of pyrophosphate to inorganic phosphate, catalyzed by the enzyme pyrophosphatase [pyrophosphate + H2O → 2 phosphate]. 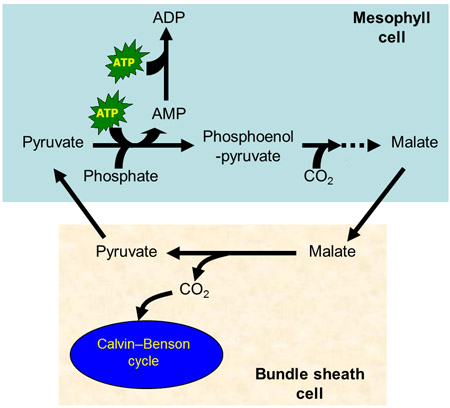 Web Figure 8.4.B   Supplementary energy required for the operation of C4 photosynthesis

In summary, every molecule of CO2 fixed into carbohydrates by C4 photosynthesis utilizes two molecules of NADPH and five molecules of ATP; i.e. the ratio of ATP:NADPH is 5:2 per CO2 photoassimilated.

Because of this higher energy demand, C4 plants photosynthesizing under nonphotorespiratory conditions (high CO2 and low O2) require more quanta of light per CO2 than C3 leaves. In normal air, the quantum requirement of C3 plants changes with factors that affect the balance between photosynthesis and photorespiration, such as temperature. By contrast, owing to the mechanisms built in to avoid photorespiration, the quantum requirement of C4 plants remains relatively constant under different environmental conditions (see textbook Figure 9.16).

In summary, the use of 3.5 molecules of ATP in CAM photosynthesis complements the utilization of two molecules of NADPH and three molecules of ATP for the assimilation of every molecule of CO2 fixed into carbohydrates via the Calvin–Benson cycle.