Topic 8.3 Rubisco: A Model Enzyme for Studying Structure and Function

Topic 8.3 Rubisco: A Model Enzyme for Studying Structure and Function

With the exception of the carbon fixed by a some prokaryotic organisms, most of the carbon fixed on Earth is processed by the Calvin cycle. The concentration of rubisco, the carboxylating enzyme of the Calvin cycle, is generally high. For example, it accounts for 50% or more of the total protein in plant leaves, and its concentration within chloroplasts is extremely high (ca. 0.2 g/ml).

Rubisco occurs in two functionally analogous forms, having different structure, distribution, and O2 sensitivity. Oxygenic phototroph (cyanobacteria, chloroplasts from high plants) and many photosynthetic bacteria contain a form of the enzyme, (form I), made up of eight large (L) catalytic subunits (about 55 kDa each) and eight small (S) subunits (about 14 kDa each), giving a molecular mass of about 560 kDa for the complete protein (L8S8). The 8 L subunits of form I are arranged as an octameric core surrounded by two layers of four S subunits, with each layer located on opposite sides of the molecule (Web Figure 8.3.A). 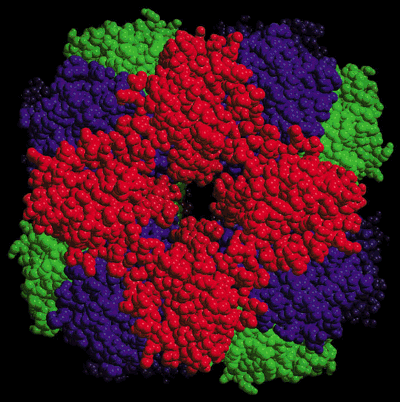 Form II of rubisco is found in some photosynthetic purple nonsulfur bacteria, and it is composed of two L subunits, each 50 kDa. Eukaryotic algal dinoflagellates also use a dimeric enzyme of proteobacterial ancestry. A rubisco-like enzyme lacking catalytic activity has recently been identified in photosynthetic green sulfur bacteria which lack the Calvin cycle. The evidence suggests that the enzyme may function in sulfur oxidation to provide electrons for the photosynthetic electron transport chain. Genome sequences show that the rubisco-like protein also occurs in certain heterotrophic bacteria.

Besides its carboxylation reaction, rubisco also reacts with O2, leading to photorespiration, an apparently wasteful reaction that lowers the efficiency of carbon incorporation to organic compounds (see textbook Chapter 8). Since CO2 and O2 are competing substrates for rubisco, the carboxylation of the 2,3-enediol intermediate of ribulose-1,5-bisphosphate (see textbook Figure 8.4) depends on the environmental ratio CO2 / O2 (see Web Topic 8.5) and an intrinsic feature of the enzyme (i.e., the specificity factor φ [sigma]).

When CO2 and O2 as substrates compete for rubisco, the rate of carboxylation and the rate of oxygenation are given by Web Equations 8.3.1 and 8.3.2, respectively.

On this basis, the ratio of carboxylation to oxygenation catalyzed by rubisco is

in which the specificity factor (φ) represents the discrimination between the two competing substrates of rubisco. Clearly, a high value of φ indicates greater specificity for CO2.

The specificity factor φ ranges from 50 (cyanobacteria) to 80 (C3 and C4 plants) in form I of rubisco, but falls to about 10 (purple photosynthetic bacteria) in form II. A more detailed analysis of the way in which the properties of rubisco affect the specificity factor show that Kc (carboxylation) constitutes the major cause of variation but changes in Ko (oxygenation) and Vc / Vo are also found.

The genes that code for the small (rbcS) and the large (rbcL) subunit of rubisco are critical to the functioning of autotrophic cells. In contrast to prokaryotes, in which gene expression and protein biosynthesis take place in the same cellular compartment (cytosol), rubisco of most eukaryotic organisms is assembled by the coordinate action of multiple biochemical processes which might require the participation of several cellular compartments. The light-mediated modulation of rbcS expression in the nucleus of plants (Metaphyte) and green algae (Chlorophyte) produces a precursor polypeptide on cytosolic ribosomes. Translocation across the chloroplast envelope removes the N-terminal plastid-targeting peptide, and releases the mature form in the stroma of chloroplasts. On the other hand, the chloroplast genome of plants and green algae encodes rbcL, so the biosynthesis of the large subunit occurs entirely on chloroplast ribosomes. The assembly of rubisco from its constituent subunits takes place in the chloroplast.

Not all photosynthetic organisms have the same rubisco genes. Genes encoding both the large and the small rubisco subunits occur in chloroplasts of brown (Chromophyte) and red (Rhodophyte) algae. On the other hand, dinoflagellates lack rbcS because they only have the form II of the enzyme in their chloroplasts and, more important, rbcL resides entirely in the nuclear genome.

Genes encoding chloroplast proteins in the nuclear DNA of some photosynthetic eukaryotes have another interesting feature. The rbcS genes of plants and green algae encode a precursor that comprises only one copy of the mature protein, but the rbcS of the protist Euglena gracilis and the nuclear rbcL of dinoflagellates code for polypeptides that contain eight and three copies, respectively, of the mature protein. The subsequent proteolytic processing of these precursors at the chloroplast envelope ensures the assembly of the functional enzyme in the stroma.

Special proteins that modulate protein folding assist the formation of the L8S8 type of rubisco in a process that uses ATP. These proteins, called chaperonins, modify the noncovalent interactions of target proteins and bring about the active conformation of the enzyme. Several different chaperonins promote the assembly of both subunits.