Topic 8.2 How the Calvin–Benson Cycle was Elucidated

Topic 8.2 How the Calvin–Benson Cycle was Elucidated

The elucidation of the Calvin cycle was the result of a series of elegant experiments by Melvin Calvin and his colleagues in the 1950s, for which a Nobel prize was awarded in 1961. They used suspensions of the unicellular eukaryotic green alga Chlorella to trace the path of carbon. The Calvin cycle is also referred to as the reductive pentose phosphate cycle to distinguish the photosynthetic cycle from the oxidative pentose phosphate pathway (see textbook Chapter 12), with which it shares several enzymes. Yet another designation of the Calvin cycle is photosynthetic carbon reduction cycle.

To elucidate the cycle, the investigators first exposed the algal cells to constant conditions of light and CO2 to establish steady-state photosynthesis. Next they added radioactive 14CO2 for a brief period to label the intermediates of the cycle. They then killed the cells and inactivated their enzymes by plunging the suspension into boiling alcohol. They separated the 14C-labeled compounds from one another and identified them by their positions on two-dimensional paper chromatograms (Web Figure 8.2.A). 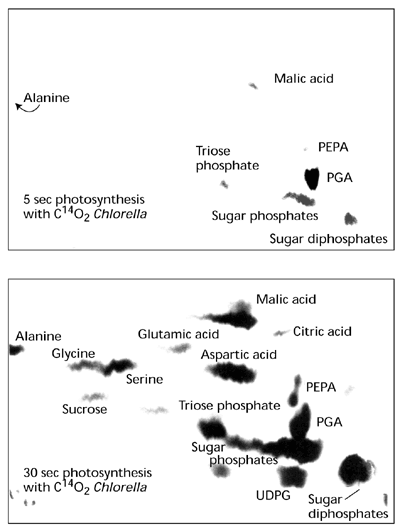 Web Figure 8.2.A   Autoradiograms showing the labeling of carbon compounds in the alga Chlorella after exposure to 14CO2. The time intervals shown in the figures indicate the length of exposure to the radiolabel. At the indicated time intervals, the reaction was terminated, by plunging of the contents into boiling alcohol. The labeled compounds in the cell homogenates were then separated by paper chromatography. The heavy labeling of 3-phosphoglycerate (PGA) after the shorter exposure indicates that it is the first stable intermediate of the Calvin (reductive pentose phosphate) cycle. (After Bassham 1965.)

To deduce the path of carbon, it was necessary to determine the distribution of 14C in each of the labeled sugars. After a brief exposure to 14CO2, individual intermediates were isolated and chemically degraded so that the amount of 14C in each carbon atom could be determined. The results showed that 3-phosphoglycerate was initially labeled predominantly in the carboxyl group. This finding suggested that the initial CO2 acceptor was a two-carbon compound, and it prompted a long and futile search for such a compound.

The subsequent discovery that pentose monophosphates and a pentose bisphosphate (ribulose) participate in the cycle raised the possibility that the initial CO2 acceptor was a five-carbon compound. This conceptual breakthrough rapidly led to the identification of ribulose-1,5-bisphosphate as the CO2 acceptor and to the formulation of the complete cycle. The operation of the cycle explained the 14C-labeling pattern of the other intermediates.

To demonstrate conclusively that a metabolic pathway exists, it is necessary to prove that the postulated enzymes catalyze the proposed reactions in the test tube. Ideally, the rates of these enzyme reactions (in vitro) should be equal to or in excess of those observed in the intact cell (in vivo). However, this evidence can be used only to support a proposed pathway. Failure to demonstrate a reaction in vitro does not prove that the reaction does not occur.

All of the reactions of the Calvin cycle have been demonstrated in vitro. With one exception, the in vitro rates of enzymatic activity are well in excess of the maximal observed rates of photosynthesis. That exception is rubisco, which, when assayed under the levels of CO2 and O2 in air, shows barely enough in vitro activity to account for the observed rate of photosynthesis in air. Although great progress has been made in increasing activity by providing proper conditions for activation, researchers continue to debate whether rubisco is a rate-limiting step in photosynthesis (Lorimer 1981).