The PS-I reaction center is composed of a multiprotein complex. The reaction center chlorophyll P700 and about 100 core antenna chlorophylls are bound to two proteins, PsaA and PsaB, with molecular masses in the range of 66 to 70 kDa (Golbeck 1992; Krauss et al. 1993, 1996; Chitnis 1996; Jordan et al. 2001). PS-I reaction center complexes have been isolated from several organisms and found to contain the 66 to 70 kDa proteins, along with a variable number of smaller proteins in the range of 4 to 25 kDa (see textbook Figure 7.27). Some of these proteins serve as binding sites for the soluble electron carriers plastocyanin and ferredoxin. The functions of some of the other proteins are not well understood. An 8-kDa protein contains some of the bound iron-sulfur centers that serve as early electron acceptors in photosystem I. The structure of the PS-I complex from pea has been determined to a resolution of 4.4 Å, and the positions of many of the chlorophylls and electron transfer components have been located (Krauss et al. 1996; Schubert et al. 1997; Jordan et al. 2001; Nelson and Ben-Shem 2004; see textbook Figure 7.27).

In their reduced form, the electron carriers that function in the acceptor region of photosystem I are all extremely strong reducing agents. These reduced species are very unstable and thus difficult to identify. Evidence indicates that one of these early acceptors is a chlorophyll molecule, and another is a quinone species, phylloquinone, also known as vitamin K1 (Nugent 1996).

Additional electron acceptors include a series of three membrane-associated iron–sulfur proteins, or bound ferredoxins, also known as Fe–S centers Fe–SX, Fe–SA, and Fe–SB. Fe–S center Fe–SX is part of the P700-binding protein; centers Fe–SA and Fe–SB reside on an 8 kDa protein that is part of the PS-I reaction center complex. Electrons are transferred through centers Fe–SA and Fe–SB to ferredoxin, a small, water-soluble iron–sulfur protein. The membrane-associated flavoprotein ferredoxin–NADP reductase (FNR) reduces NADP+ to NADPH, thus completing the sequence of noncyclic electron transport that begins with the oxidation of water (Karplus et al. 1991).

A model for the organization of electron carriers in PS-I is shown in Web Figure 7.8.B. The P700 dimer is located at the bottom of the structure and two symmetrical arms radiate from P700 (Malkin and Niyogi 2000). Each arm includes an accessory chlorophyll a and another chlorophyll molecule tentatively identified as A0. Other structures include the Fe-S center FX, and two other Fe-S centers, F1 and F2. The distance between the carriers is shown at the right. 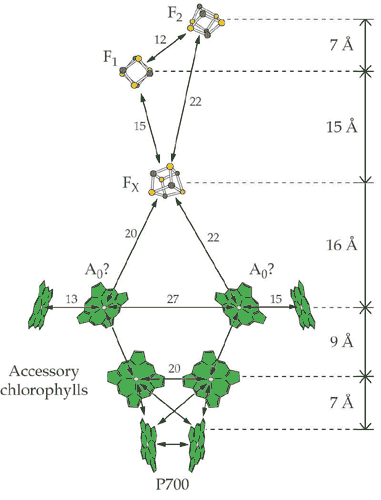 The PS-I reaction center appears to have some functional similarity to the reaction center found in the anaerobic green sulfur bacteria and the heliobacteria. These bacteria contain low-potential Fe–S centers as early electron acceptors and are probably capable of ferredoxin-mediated NAD+ reduction similar to the NADP+ reduction function of photosystem I. There is almost certainly an evolutionary relationship between these complexes and photosystem I of oxygen-evolving organisms.