The chemical mechanism of photosynthetic water oxidation is not yet known, although there is a great deal of indirect evidence about the process. If a sample of dark-adapted photosynthetic membrane is exposed to a sequence of very brief, intense flashes, a characteristic pattern of oxygen production is observed. Little or no oxygen is produced on the first two flashes, and maximal oxygen is released on the third flash and every fourth flash thereafter, until eventually the yield per flash damps to a constant value. This remarkable result was first observed by Pierre Joliot in the 1960s.

A schematic model explaining these observations, proposed by Kok and coworkers, has been widely accepted (Kok et al. 1970). This model for the photooxidation of water, called the S state mechanism, consists of a series of five states, known as S0 to S4, which represent successively more oxidized forms of the water-oxidizing enzyme system, or oxygen-evolving complex (Web Figure 7.7.A). The light flashes advance the system from one S state to the next, until state S4 is reached. State S4 produces O2 without further light input and returns the system to S0. Occasionally, a center does not advance to the next S state upon flash excitation, and less frequently, a center is activated twice by a single flash. These misses and double hits cause the synchrony achieved by dark adaptation to be lost and the oxygen yield eventually to damp to a constant value. After this steady state has been reached, a complex has the same probability of being in any of the states S0 to S3 (S4 is unstable and occurs only transiently), and the yield of O2 becomes constant. States S2 and S3 decay in the dark, but only as far back as S1, which is stable in the dark. Therefore, after adaptation to the dark, approximately three-fourths of the oxygen-evolving complexes appear to be in state S1 and one-fourth in state S0. This distribution of states explains why the maximum yield of O2 is observed after the third of a series of flashes given to dark-adapted chloroplasts. 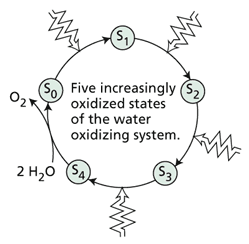 This S state mechanism explains the observed pattern of O2 release, but not the chemical nature of the S states or whether any partly oxidized intermediates, such as H2O2, are formed. Additional information has been obtained by measurement of the pattern of proton release (see textbook Equation 7.8) as the S states are advanced with flashes. In addition to oxygen, hydrogen ions are a product of water oxidation. The release of protons is not strictly coupled to O2 release.