Redox reactions, midpoint potentials, and their relationship to the laws of thermodynamics were discussed in Chapter 2, found on this web site. These concepts are useful for our discussion of electron flow from H2O to NADP+ (see textbook Figure 7.21) and the interactions between the different electron carriers.

Knowledge of the midpoint potentials of the various electron carriers is important in establishing the pathway of electron flow in any biochemical electron transport system, such as those found in chloroplasts or mitochondria. Researchers make this measurement usually by carrying out a redox titration (Dutton 1978). They adjust, or poise, the sample at a particular redox potential, usually by adding small amounts of oxidants or reductants. Redox mediators, small molecules that permit rapid equilibration between the sample and the electrodes of the measurement system, must be included to ensure that the system is at equilibrium when the measurement is made. Several measurements are made at a variety of redox potentials. The sample is stirred in a special cell that contains platinum and reference electrodes, and chemical oxidants and reductants are added to adjust the redox potential, which is read with a voltmeter (Web Figure 7.6.A). 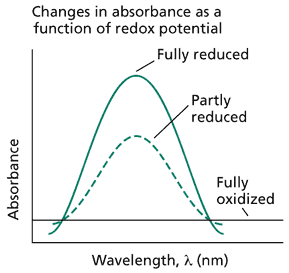 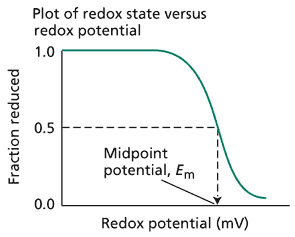