In 1984, Hartmut Michel, Johann Deisenhofer, Robert Huber, and coworkers in Munich solved the three-dimensional structure of the reaction center from the purple photosynthetic bacterium Rhodopseudomonas viridis (Deisenhofer and Michel 1989). This landmark achievement, for which a Nobel prize was awarded in 1988, was the first high-resolution X-ray structure determination for an integral membrane protein and the first structure determination for a reaction center complex. The structure is shown in Web Figure 7.5.A. 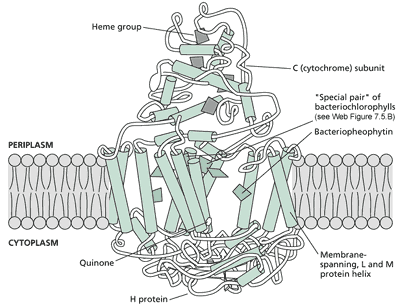 Web Figure 7.5.A   Structure of the reaction center of the purple bacterium Rhodopseudo-monas viridis, resolved by X-ray crystallography. The 11 tubes within the membrane represent transmembrane protein helices. The chlorophyll-type pigments are shown in light green; the heme groups of the tightly bound iron-containing cytochrome are shown in dark gray at the top of the diagram. The C (cytochrome subunit) points into the periplasm or outside the cell; the H subunit is in contact with the cytoplasm of the cell. The quinones and the cytochrome participate in electron transfer reactions with the bacteriochlorophylls. (Courtesy of J. Richardson.)

The protein part of the complex consists of four separate polypeptides. Two of them, called L and M (for light and medium mass) bind all of the bacteriochlorophyll, quinone, and carotenoid cofactors of the complex. The structure has a twofold symmetry about an axis perpendicular to the plane of the membrane, hinting at a dimeric nature of the reaction center. The ten transmembrane portions of the L and M peptides (five from each) are arranged in α helices, and there are almost no charged amino acid residues in the interior of the membrane. The H (heavy) protein has a single transmembrane helix and is localized mostly on the cytoplasmic side of the membrane. The C (cytochrome) subunit is located in the periplasmic region (the region between the bacterial plasma membrane and the outer membrane). The geometric arrangement of the pigments and the quinones (electron acceptors) is shown in Web Figure 7.5.B, with the protein removed. A similar arrangement is found in the reaction center of another purple photosynthetic bacterium, Rhodobacter sphaeroides, except that the C subunit is not present. 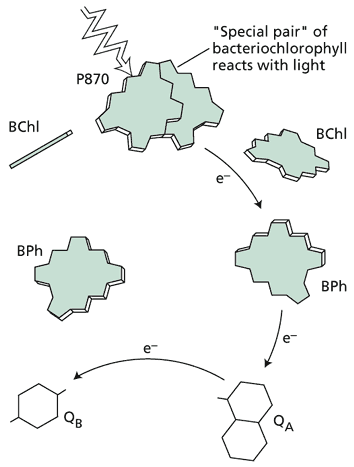 Web Figure 7.5.B   Geometric arrangement of pigments and other prosthetic groups in the bacterial reaction center: bacteriochlorophyll (BChl); bacteriopheophytin (BPh), a chlorophyll molecule in which the magnesium atom has been replaced by two hydrogen atoms; and QA and QB, the first and second quinone acceptors. The cytochrome heme groups have been deleted from this diagram; if present, they would be at the top. The two bacteriochlorophylls at the top (P870) are the "special pair" that react with light within the reaction center. The electron transfer sequence begins at the special pair and proceeds down the right side of the diagram to bacteriopheophytin. Next, the electrons are transferred to QA and then to QB. The distances between the depicted molecules and their angles within the planes of symmetry of the reaction center have been determined with precision, making it possible to analyze the path of photons and electrons in the reaction center in remarkable detail.

Two of the bacteriochlorophyll molecules are in intimate contact with each other and are known as the special pair. This dimer, whose existence was predicted from magnetic-resonance studies, is the photoactive portion of the complex. An electron is transferred from this dimer along the sequence of electron carriers on the right side of the complex. Detailed analysis of these structures, along with analysis of numerous mutants, has revealed many of the principles involved in the energy storage processes that are carried out by all reaction centers.

The bacterial reaction center structure is thought to be similar in many ways to that found in photosystem II from oxygen-evolving organisms, especially in the electron acceptor portion of the chain (see textbook Figure 7.23). The proteins that make up the core of the bacterial reaction center are relatively similar in sequence to their photosystem II counterparts, implying an evolutionary relatedness.