The puzzling red drop (see Figure 7.12 in the textbook) and enhancement effects (see p. 179 of the textbook) were explained by experiments performed by Louis Duysens of the Netherlands (Duysens et al. 1961). He suggested that two photochemical events were responsible for enhancement effects. One photochemical event produced an oxidation while the other produced a reduction. Chloroplasts contain cytochromes, iron-containing proteins that function as intermediate electron carriers in photosynthesis (see textbook Figure 7.19). Duysens found that when a sample of a red alga was illuminated with long-wavelength light, the cytochrome became mostly oxidized. If light of a shorter wavelength was also present, the effect was partly reversed (Web Figure 7.4.A). These antagonistic effects can be explained by a mechanism involving two photochemical events: one that tended to oxidize the cytochrome and one that tended to reduce it (Hill and Bendall 1960). 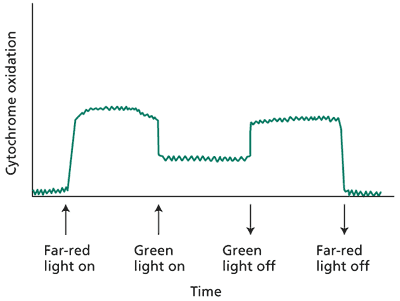 Web Figure 7.4.A   Antagonistic effects of light on cytochrome oxidation. Far-red light is very effective in oxidizing the cytochrome f in the chloroplast. If green light is also present, some of the cytochrome becomes reduced. The two wavelengths have opposite effects—hence the term "antagonistic." This experiment is one of the clearest demonstrations of the existence of two photochemical systems in photosynthesis: one that reduces cytochrome and one that oxidizes it. This particular experiment was done with a red alga, in which photosystem II (see textbook Figure 7.13) is driven best by green light, and photosystem I is driven best by far-red light. (After Duysens et al. 1961.)

We know now that in the red region of the spectrum, one of the photoreactions, known as photosystem I (PS-I), absorbs preferentially far-red light of wavelengths greater than 680 nm, while the second, known as photosystem II (PS-II), absorbs red light of 680 nm well and is driven very poorly by far-red light. This wavelength dependence explains the enhancement effect and the red drop effect. Another difference between the photosystems is that Photosystem I produces a strong reductant, capable of reducing NADP+, and a weak oxidant. Photosystem II produces a very strong oxidant, capable of oxidizing water, and a weaker reductant than the one produced by photosystem I. This reductant of photosystem II re-reduces the oxidant produced by photosystem I (see textbook Figure 7.14), which explains the antagonistic effect.