Topic 7.10 Mode of Action of Some Herbicides

Topic 7.10 Mode of Action of Some Herbicides

Herbicides of one major class—about half of the commercially important compounds—act by interrupting photosynthetic electron flow (Ashton and Crafts 1981). Web Figure 7.10.A shows the chemical structure of two of these compounds. The precise sites of action of many of these agents have been found to lie either at the reducing side of photosystem I (for example, in paraquat) or in the quinone acceptor complex in the electron transport chain between the two photosystems (for example, in diuron) (Web Figure 7.10.B). 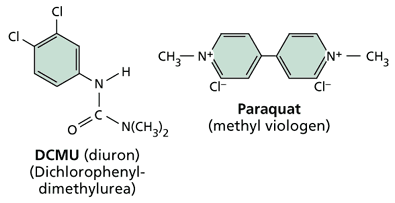 Web Figure 7.10.A   The use of herbicides to kill unwanted plants is widespread in modern agriculture. Many different classes of herbicides have been developed, and they act by blocking amino acid, carotenoid, or lipid biosynthesis or by disrupting cell division. Understanding the mode of action of herbicides has been an important tool in research on plant metabolism and has facilitated their application under different agricultural practices (Ashton and Crafts 1981). Here, the chemical structure of two herbicides that block photosynthetic electron flow are shown. DCMU is also known as diuron. Paraquat has acquired public notoriety because of its use on marijuana crops. 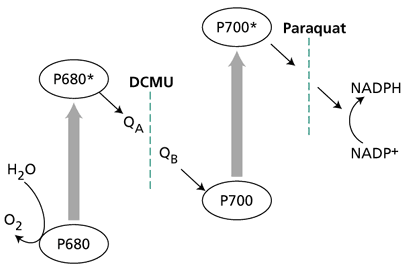 Web Figure 7.10.B   Sites of action of herbicides. Many herbicides, such as DCMU, act by blocking electron flow at the quinone acceptors of photosystem II, by competing for the binding site of plastoquinone that is normally occupied by QB. Other herbicides, such as paraquat, act by accepting electrons from the early acceptors of photosystem I and then reacting with oxygen to form superoxide, O2–, a species that is very damaging to chloroplast components, especially lipids.

Paraquat acts by intercepting electrons between the bound ferredoxin acceptors and NADP and then reducing oxygen to superoxide (O2–). Superoxide is a free radical that reacts nonspecifically with a wide range of molecules in the chloroplast, leading to the rapid loss of chloroplast activity. Lipid molecules in cell membranes are especially sensitive.

The herbicides that act on the quinone acceptor complex compete with plastoquinone for the QB binding site. If herbicide is present, it displaces the oxidized form of plastoquinone and occupies the specific binding site for the quinone acceptor, which is thought to lie on the D1 herbicide-binding protein. The herbicide is not able to accept electrons, so the electron is unable to leave QA, the first quinone acceptor. Thus, the binding of herbicide effectively blocks electron flow and inhibits photosynthesis. Many herbicides that act in this manner also inhibit electron flow in photosynthetic bacteria that have quinone-type electron acceptor complexes (Trebst 1986).

In recent years, herbicide-resistant biotypes of common weeds have appeared in areas where a single type of herbicide has been used continuously for several years. These biotypes can be orders of magnitude more resistant to certain classes of herbicides than the nonresistant plant is. In several cases the resistance factor has been traced to a single amino acid substitution in the D1 protein. This change, presumably in the quinone (and herbicide) binding region of the peptide, lowers the binding affinity of the herbicide, making it much less effective.

The possibility of fine-tuning the herbicide sensitivity of crop plants by making subtle changes in the proteins of the PS-II reaction center has created a great deal of interest in the agricultural chemical industry. Through biotechnology, it is now possible to make a crop plant that is resistant to a particular herbicide, which can then be applied to control undesirable plants that are not resistant. The success of this approach will depend on whether undesirable side effects of the herbicide-resistant mutations can be controlled and on how rapidly the weeds acquire resistance through natural selection or gene transfer. Thus, it is a race between science and evolutionary change (Dover and Croft 1986; Chase et al. 1998).

A complementary approach is to insert resistance factors to certain pests, such as insects, into the plant via genetic engineering. The plants then produce the toxic species themselves, eliminating the need for insecticides.