Much of what we know about the photosynthetic apparatus was learned through spectroscopy—that is, measurements of the interaction of light and molecules. Spectrophotometry is an important branch of spectroscopy that focuses on the technique of measurement. Here we will examine four topics: Beer's law, the measurement of absorbance, action spectra, and difference spectra.

An essential piece of information about any molecular species is how much of it is present. Quantitative measures of concentration are one of the cornerstones of biological science. Of all the methods that have been devised for measuring concentration, by far the most widely applied is absorption spectrophotometry. In this technique, the amount of light that a sample absorbs at a particular wavelength is measured and used to determine the concentration of the sample by comparison with appropriate standards or reference data. The most useful measure of light absorption is the absorbance (A), also commonly called the optical density (OD) (Web Figure 7.1.A). The absorbance is defined as where I0 is the intensity of light that is incident on the sample and I is the intensity of light that is transmitted by the sample. 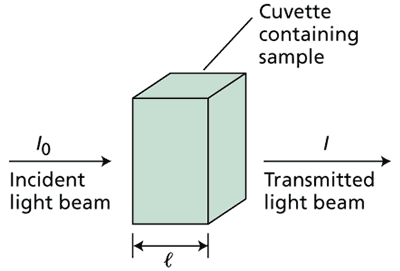 Web Figure 7.1.A   Definition of absorbance. A monochromatic incident light beam of intensity I0 traverses a sample contained in a cuvette of length (l). Some of the light is absorbed by the chromophores in the sample, and the intensity of light that emerges is I.

The absorbance of a sample can be related to the concentration of the absorbing species through Beer's law:

where c is concentration, usually measured in moles per liter; l is the length of the light path, usually 1 cm; and ε is a proportionality constant known as the molar extinction coefficient, with the units of liters per mole per centimeter. The value of ε is a function of both the particular compound being measured and the wavelength. Chlorophylls typically have an ε value of about 100,000 L mol–1 cm–1. When more than one component of a complex mixture absorbs at a given wavelength, the absorbances due to the individual components are generally additive.

The absorbance is measured by an instrument called a spectrophotometer (Web Figure 7.1.B). The essential parts of a spectrophotometer include a light source, a wavelength selection device such as a monochromator or filter, a sample chamber, a light detector, and a readout device, usually also include a computer, which is used for storage and analysis of the spectra. The most useful machines scan the wavelength of the light that is incident on the sample and produce, as output, spectra of absorbance versus wavelength, such as those shown in textbook Figure 7.7.

Web Figure 7.1.B   Schematic diagram of a spectrophotometer. The instrument consists of a light source, a monochromator that contains a wavelength selection device such as a prism, a sample holder, a photodetector, and a recorder or computer. The output wavelength of the monochromator can be changed by rotation of the prism; the graph of absorbance versus wavelength is called a spectrum.

The use of action spectra has been central to the development of our current understanding of photosynthesis. An action spectrum is a graph of the magnitude of the biological effect observed as a function of wavelength. Examples of effects measured by action spectra are oxygen evolution (Web Figure 7.1.C) and hormonal growth responses due to the action of phytochrome (see Chapter 16 of the textbook). Often an action spectrum can identify the chromophore responsible for a particular light-induced phenomenon. Action spectra were instrumental in the discovery of the existence of the two photosystems in O2-evolving photosynthetic organisms. 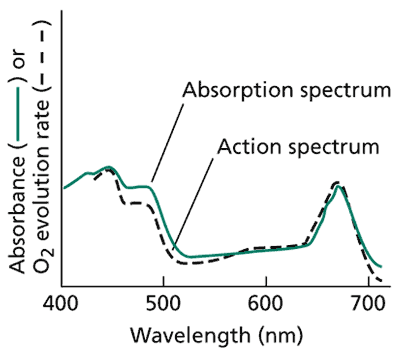 Some of the first action spectra were measured by T. W. Engelmann in the late 1800s (Web Figure 7.1.D). Engelmann used a prism to disperse sunlight into a rainbow that was allowed to fall on an aquatic algal filament. A population of O2-seeking bacteria was introduced into the system. The bacteria congregated in the regions of the filaments that evolved the most O2. These were the regions illuminated by blue light and red light, which are strongly absorbed by chlorophyll. Today, action spectra can be measured in room-sized spectrographs in which the scientist enters a huge monochromator and places samples for irradiation in a large area of the room bathed by monochromatic light. But the principle of the experiment is the same as that of Engelmann's experiments. 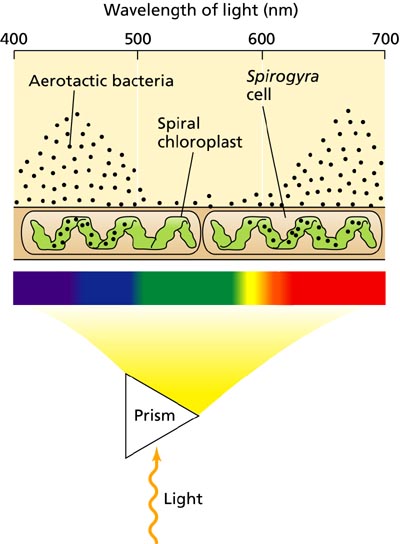 Web Figure 7.1.D   Schematic diagram of the action spectrum measurements by T. W. Engelmann. Engelmann projected a spectrum of light onto the spiral chloroplast of the filamentous green alga Spirogyra and observed that oxygen-seeking bacteria introduced into the system collected in the region of the spectrum where chlorophyll pigments absorb. This action spectrum gave the first indication of the effectiveness of light absorbed by accessory pigments in driving photosynthesis.

An important technique in studies of photosynthesis is light-induced difference spectroscopy, which measures changes in absorbance (Web Figure 7.1.E). In this technique, bright light, often called actinic light, is used to illuminate a sample, while a dim beam of light is used to measure the absorbance of the sample at wavelengths other than that of the actinic beam. In this way a difference spectrum is obtained, which represents the changes in the absorption spectrum of the sample induced by illumination with the actinic light. Absorption bands that disappear upon illumination appear as negative peaks; new bands that appear upon illumination appear as positive peaks. Difference spectra give important clues to the identity of molecular species participating in the photoreactions of photosynthesis. The difference spectrum of the photooxidation of P700 (a chlorophyll that absorbs light of wavelength 700 nm, see textbook Figure 7.19) is shown in Web Figure 7.1.F (Ke 1973).

By the use of special flash techniques, it is possible to record the difference spectrum at a given time after flash excitation. Multiple difference spectra recorded at different times after flash excitation can be used to measure the kinetics of the chemical reactions that follow photon excitation of a reaction center. These techniques can have extraordinary time resolution, in some cases less than a picosecond (10–12 s), and have provided great insights into the earliest events in the photosynthetic energy storage process.