Just as studies with isolated thylakoid membranes led to the elucidation of the electron transfer reactions of photosynthesis (see textbook Chapter 7), the development of techniques for isolating functionally competent tonoplasts and plasma membranes has enabled scientists to study the transport reactions of these membranes in vitro (Sze 1985; Jahn et al. 2001). The use of isolated membrane vesicles to study transport avoids interference from metabolism. Since the contents of the vesicles can be fairly readily exchanged, the concentrations of solutes on each side of the membrane can be better defined. Two types of preparations have been used: intact vacuoles, and isolated plasma membrane or tonoplast vesicles.

When protoplasts prepared by enzymatic digestion of the cell walls are maintained in the plasmolyzed state by incubation in medium containing a suitable osmotic solute, such as mannitol, the plasma membranes can be carefully lysed without breaking the tonoplast by a gentle osmotic shock (Pantoja and Smith 2002). The intact vacuoles that are released by this treatment can then be purified by centrifugation through a sucrose density gradient. Intact vacuoles (along with contaminating cellular debris) are centrifuged in a tube containing a concentration gradient of sucrose (or another suitable solute). Because intact vacuoles tend to exclude the solute, they sediment to a lighter density on the density gradient than the other organelles and membranes do. In this way preparations of highly purified intact vacuoles can be obtained.

Alternatively, tonoplasts and plasma membranes can be purified as small membrane vesicles. When tissues are ground in a mortar and pestle or homogenized in a blender, broken pieces of various membranes tend to seal up to form small vesicles less than 1 µm in diameter. Because of a low ratio of protein to lipid in the tonoplast membrane, tonoplast vesicles usually have a relatively low density, and they can be separated from other cellular membranes by density-gradient centrifugation (Kawamura et al. 2000).

Tissue homogenization often produces a mixture of vesicles of different orientation (right-side-out and inside-out vesicles). In the case of plasma membrane vesicles, phase partition selects for right-side-out vesicles, which therefore show little reactivity to ATP because the catalytic sites of the enzymes are facing inside the vesicle. If a detergent is added to such a preparation, ATP penetrates the vesicles and is hydrolyzed, but since the vesicles are no longer sealed, no transport is observed.

One kind of detergent (Brij 58) in low doses does not make the membranes leaky but, it is claimed, causes them to reverse their orientation (Johansson et al. 1995). Apparently, this detergent accumulates in the inner half of the lipid bilayer, causing it to expand and flip the vesicles inside out. Since the catalytic site of the enzyme is now facing the external solution, in the presence of this detergent the vesicles respond to ATP by creating a gradient of pH and membrane potential.

Radioisotopes can be used to monitor the transport of various solutes into membrane vesicles. The vesicles are incubated for various times with the labeled solute, then separated by rapid filtration, and their radioactivity is measured in a scintillation counter. Other methods have been developed to measure the gradients of pH and membrane potential created by proton pumps. One such method uses fluorescent weak bases such as 9-aminoacridine (9-AA) or quinacrine, which are lipid-soluble in their uncharged form and readily diffuse across the membrane and enter the vesicle. Within the acidified vesicle, the amino group becomes protonated, trapping the charged form of the molecule inside (Web Figure 6.6.A). As the dye molecules accumulate inside the vesicles, they form dimers and other aggregates that result in a reduction in their fluorescence, a phenomenon termed fluorescence quenching. One can thus study ATP-driven proton transport across the vesicle membrane by measuring the rate of fluorescence quenching in an instrument called a fluorescence spectrophotometer. 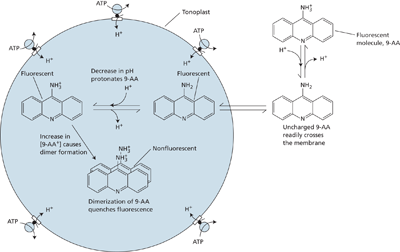 Web Figure 6.6.A   Measuring H+ pumping by the fluorescence-quenching method. Diagram of the reaction. In the presence of an ATP-driven pH gradient, the protonated (charged) form of a fluorescent weak base, such as 9-AA, accumulates inside the vesicle. The accumulation of 9-AA inside the vesicle results in a decrease in the total fluorescence of the suspension as a result of self-quenching caused by the dimerization of 9-AA.

As Web Figure 6.6.B shows, addition of ATP to membrane vesicles isolated from the plasma membrane or tonoplast leads to a rapid decrease in the fluorescence (quenching). A steady state is reached when the rate of leakage of protons out of the vesicle equals the rate of transport of protons into the vesicle. Gramicidin, a compound that induces nonspecific holes in the membrane, rapidly dissipates the pH gradient, as indicated by the recovery of fluorescence. Other molecular probes, such as oxonol dyes, which associate with lipid membranes and show changes in fluorescence as the electric potential changes, can be used in a similar fashion to study ATP-driven membrane potentials. 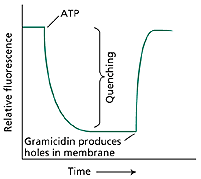 Web Figure 6.6.B  Results of a typical fluorescence-quenching experiment, showing the decrease in fluorescence upon the addition of ATP, and the recovery of fluorescence when the ΔpH is dissipated using the channel-forming ionophore gramicidin, which produces nonspecific pores in the membrane.

Although it has proven difficult to make absolute measurements of the pH and potential gradients in membrane vesicles, this type of study has been very useful for relative measurements, and for defining the energy sources and activator and inhibitor sensitivities of various transport systems (Sze 1985). In combination with other experimental techniques, studies with membrane vesicles have provided many insights into transport in plant cells.