The use of the patch clamp method in plant physiology is generating information about the properties of plant membranes that is beyond the scope of other techniques. Conventional electrophysiological studies with intracellular electrodes (see textbook Figure 6.3) are valuable for the measurement of membrane potentials and other electrical properties of plant cells, but these methods have limitations for the characterization of ion pumps and single ion channels. Patch clamping, on the other hand, is very well suited for that purpose (Hedrich and Schroeder 1989; Miedema and Assmann, 1998).

During conventional intracellular recording of cellular electric potentials, cells are impaled with a glass micropipette electrode, and the electrode tip is located inside the cell, usually in the vacuole. For patch clamp experiments, the cell walls are first digested away by treatment with the appropriate cell wall enzymes, resulting in naked protoplasts. The tip of a glass micropipette is then brought into contact with the plasma membrane of the protoplast, and gentle suction is applied to facilitate the formation of a tight seal between the micropipette and the membrane (Web Figures 6.2.A and 6.2.B). The unusual tightness of the seal that forms between the patch pipette and the membrane reduces the leakage-caused background electrical noise typical of conventional intracellular recording sufficiently to allow high-resolution recordings of the currents through single ion channels. 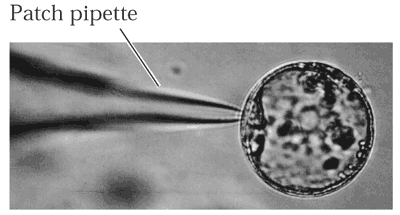 Web Figure 6.2.A   Micrograph of a patch pipette attached to the surface of a barley aleurone cell protoplast. (Photo courtesy of J. Schroeder and D. Bush.) 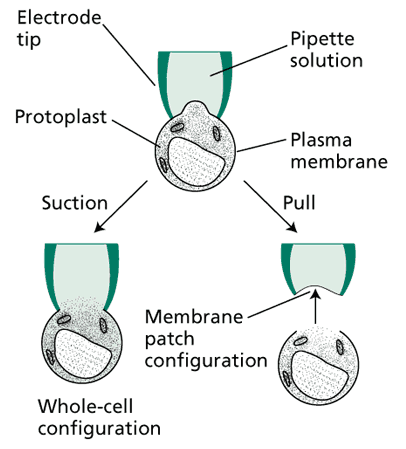 Web Figure 6.2.B   Diagram of the whole-cell and membrane patch configuration.

When a tight seal is attained, several options become available to the investigator. Further suction can remove the portion of the membrane delimited by the opening in the pipette tip, exposing the interior of the cell to the micropipette solution (thus different solutions can be introduced into the cell through the micropipette). In this configuration, measured electric currents reflect the sum total of all electric charges carried by active and passive ion fluxes across the plasma membrane of the whole cell (see Web Figure 6.2.B).

Pulling the electrode away from the cell produces a membrane patch that becomes exposed to both the pipette solution and the bathing medium (see Web Figure 6.2.B). Because the membrane patches contain only a few channels, this configuration makes it possible to study the abrupt changes in current caused by the opening and closing of single ion channels (Web Figure 6.2.C, part 3). Remarkably, this technique is sensitive enough to detect the change in conformation of a single protein molecule.

Because protoplasts are spherical, their volume is easy to measure, and their lack of electrical connections with other cells facilitates calculations of charge fluxes per unit area of membrane. Other advantages of patch clamping are the ability to distinguish between electrical events at the plasma membrane and the tonoplast and the possibility of controlling the composition of both the cytosol and the bathing medium.

Many of the patch clamp studies on plant membranes have been performed with guard cells. Web Figure 6.2.C shows some of the results obtained by measuring electric current at controlled membrane potentials (voltage clamping ). Whole-cell currents are shown in Figure 6.2.C, part 1, using solutions in which K+ is the main ion that can permeate the membrane. Initially, the membrane potential is held at a value close to the K+ equilibrium potential. Then voltage pulses (in this case about 3 s long) are applied to the protoplast (as indicated at right in the figure), and the electric current (in picoamperes) is followed with time (an upward deflection of the recording instrument indicates positive charges moving out of the cell). In this case, the current does not change instantaneously to a new stable value after a voltage change. 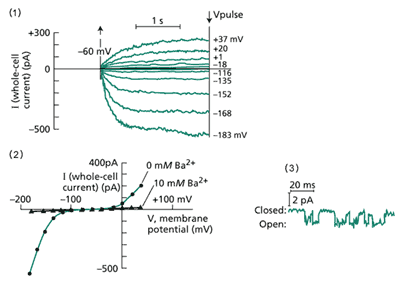 Web Figure 6.2.C   Recordings of K+ currents in whole cells and in single K+-selective channels of guard cell protoplasts. (1) K+ currents recorded in the whole-cell configuration (see Web Figure 6.2.B) when the membrane potential is clamped at different values. Upward deflections show outward currents; downward deflections show inward currents. K+ concentrations were 105 mM in the pipette and cytoplasm, and 11 mM in the bathing solution outside the cell. (2) Data from the same experiment plotted as an I/V (current/voltage) curve, before and after the addition of Ba2+, an ion that blocks K+ channels. (3) Inward K+ current through a single channel in a membrane patch. (From Schroeder et al. 1987.)

The gradual increase in current after a change in voltage reflects the opening of increasing numbers of channels in response to the membrane potential. Channels responding in this way are termed voltage-gated channels. In general, the gating (opening and closing) of a channel is controlled independently of its ion selectivity, which is generally constant for a particular kind of channel protein. The same data are plotted in Web Figure 6.2.C, part 2 as an I/V (current/voltage) curve. Again the current does not depend in a simple way on the driving force for K+ diffusion (that is, the deviation of the potential from the K+ equilibrium potential). An outward current is activated only at potentials more positive than –40 mV, and an inward current is activated only at potentials more negative than about –100 mV. This activation is a reflection of the gating of individual channel proteins with different properties.

The inward and outward currents can be shown to have different single-channel conductances (the ability of current to cross the membrane) and varying response times, and they are differentially affected by various activators and inhibitors. It is now known that the inward and outward currents are carried by two different kinds of K+ channels, as demonstrated by the cloning and expression of the respective genes (Maathuis et al. 1997; Schachtman, 2000). The outward-rectifying channels open only when the membrane potential favors outward diffusion of K+, and the inward-rectifying channels open only when the membrane potential favors the inward diffusion of K+. Since each type of channel has its own regulatory mechanisms, the cell can independently control the rates of inward and outward diffusion.

Additional information about K+ channels can be obtained from studies of currents in isolated patches of membrane in which single channels can be visualized (see Web Figure 6.2.C, part 3). When held at a constant voltage, these patches show abrupt jumps in the level of current, as single K+ channels open and close. This behavior is seen only in membrane channels, never in ion pumps or carriers, because a single conformational change of a channel can allow hundreds of thousands of ions to cross the membrane, whereas a conformational change of a pump or a carrier can transport only one, or a few, molecules or ions. For more information about potassium channels, see Web Essay 6.1.

Patch clamp studies have also shown that gated channels can be distinguished on the basis of how long the gates remain open in response to a prolonged stimulus. Two types of anion channels have been characterized at the guard cell plasma membrane: Rapidly activated (R-type) and slowly activated (S-type). R-type channels open and close very rapidly in response to a voltage stimulus; S-type channels remain open for the duration of the stimulus. Rapid and slow channels have also been identified in vacuolar membranes, and they are referred to as fast vacuolar (FV) or slow vacuolar (SV) channels.