Topic 5.2 Observing Roots below the Ground

Topic 5.2 Observing Roots below the Ground

Studying root growth below the soil surface requires a means of observing the root system directly. As early as 1873, the German botanist Julius von Sachs studied root systems by using simple soil-filled boxes with one glass wall. Since that time, facilities for studying root growth in the soil have become much more complex. Large laboratories with subterranean chambers for the observation of root growth have been constructed and allow the analysis of root growth while the aerial parts of the plant are exposed to natural field conditions (Klepper and Kaspar 1994). These laboratories are called rhizotrons (from the Greek rhizos, meaning "root," and tron, meaning "a device for studying").

In a rhizotron, roots grow in glass-walled chambers that line underground passageways. Grid lines on the glass walls indicate soil depth. Details of root morphology (root size and distribution) under natural growing conditions can be observed with specially designed microscopes, mounted adjacent to the glass walls of the root chambers. In addition, the growth of the roots over a period of time can be measured with time-lapse photography.

Because rhizotrons are expensive to construct and maintain, they have been largely supplanted by minirhizotrons or root periscopes. Minirhizotrons are transparent plastic tubes previously buried at an angle in the soil near the plants to be observed. An optical device such as a tilted mirror with a magnifying lens or a miniature videocamera is inserted into a tube to monitor roots growing along its surface (Web Figure 5.2.A). This device provides information on rooting density in the bulk soil, as well as on root growth and phenology. Plant physiologists use such information in conjunction with changes in nutrient and water levels in the soil to assess root activity through the soil profile. 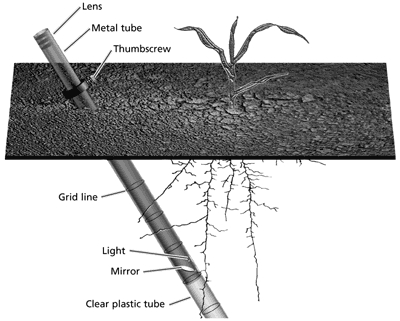 Web Figure 5.2.A   Drawing of a minirhizotron installed near an oat seedling. A metal tube that slides within a clear plastic tube is held in place by a thumbscrew. The metal tube contains the optics for viewing roots growing along the surface of the plastic tube. A dark grid scribed onto the surface of the plastic tube assists in positioning the metal tube. The optics include lenses, mirror, and lights. Many modern configurations use a miniature television camera instead of lenses to obtain the image.