Plant scientists have expended considerable effort in devising accurate and reliable methods for evaluating the water status of a plant. Four instruments that have been used extensively to measure Ψ , Ψs , and Ψp are described here: psychrometer, pressure chamber, cryoscopic osmometer, and pressure probe.

Psychrometry (the prefix "psychro-" comes from the Greek word psychein, "to cool") is based on the fact that the vapor pressure of water is lowered as its water potential is reduced. Psychrometers measure the water vapor pressure of a solution or plant sample, on the basis of the principle that evaporation of water from a surface cools the surface. 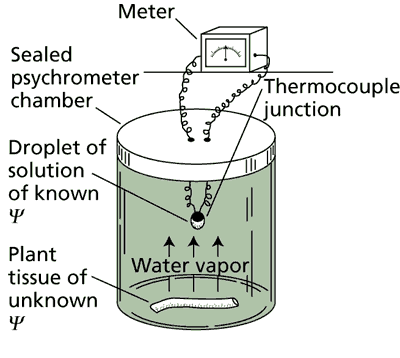 Web Figure 3.6.A   Diagram illustrating the use of isopiestic psychrometry to measure the water potential of a plant tissue.

One psychrometric technique, known as isopiestic psychrometry, has been used extensively by John Boyer and coworkers (Boyer and Knipling 1965) and is illustrated in Web Figure 3.6.A. Investigators make a measurement by placing a piece of tissue sealed inside a small chamber that contains a temperature sensor (in this case, a thermocouple) in contact with a small droplet of a standard solution of known solute concentration (known Ψs and thus known Ψ). If the tissue has a lower water potential than that of the droplet, water evaporates from the droplet, diffuses through the air, and is absorbed by the tissue. This slight evaporation of water cools the drop. The larger the difference in water potential between the tissue and the droplet, the higher the rate of water transfer and hence the cooler the droplet. If the standard solution has a lower water potential than that of the sample to be measured, water will diffuse from the tissue to the droplet, causing warming of the droplet. Measuring the change in temperature of the droplet for several s olutions of known Ψ makes it possible to calculate the water potential of a solution for which the net movement of water between the droplet and the tissue would be zero (Web Figure 3.6.B) signifying that the droplet and the tissue have the same water potential. 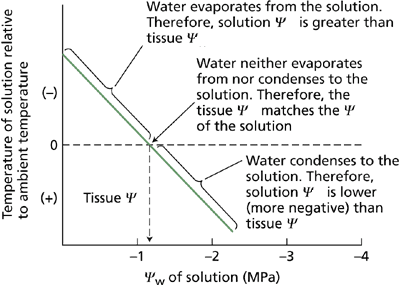 Psychrometers can be used to measure the water potentials of both excised and intact plant tissue. Moreover, the method can be used to measure the Ψs of solutions. This can be particularly useful with plant tissues. For example, the Ψ of a tissue is measured with a psychrometer, and then the tissue is crushed and the Ψs value of the expressed cell sap is measured with the same instrument. By combining the two measurements, researchers can estimate the turgor pressure that existed in the cells before the tissue was crushed (Ψp = Ψ – Ψs).

A major difficulty with this approach is the extreme sensitivity of the measurement to temperature fluctuations. For example, a change in temperature of 0.01°C corresponds to a change in water potential of about 0.1 MPa. Thus, psychrometers must be operated under constant temperature conditions. For this reason, the method is used primarily in laboratory settings. There are many variations in psychrometric technique; interested readers should consult Brown and Van Haveren 1972, Slavik 1974, and Boyer 1995.

A relatively quick method for estimating the water potential of large pieces of tissues, such as leaves and small shoots, is by use of the pressure chamber . This method was pioneered by Henry Dixon at Trinity College, Dublin, at the beginning of the twentieth century, but it did not come into widespread use until P. Scholander and coworkers at the Scripps Institution of Oceanography improved the instrument design and showed its practical use (Scholander et al. 1965).

In this technique, the organ to be measured is excised from the plant and is partly sealed in a pressure chamber (Web Figure 3.6.C). Before excision, the water column in the xylem is under tension. When the water column is broken by excision of the organ (i.e., its tension is relieved allowing its Ψp to rise to zero), water is pulled rapidly from the xylem into the surrounding living cells by osmosis. The cut surface consequently appears dull and dry. To make a measurement, the investigator pressurizes the chamber with compressed gas until the distribution of water between the living cells and the xylem conduits is returned to its initial, pre-excision, state. This can be detected visually by observing when the water returns to the open ends of the xylem conduits that can be seen in the cut surface. The pressure needed to bring the water back to its initial distribution is called the balance pressure and is readily detected by the change in the appearance of the cut surface, which becomes wet and shiny when this pressure is attained. 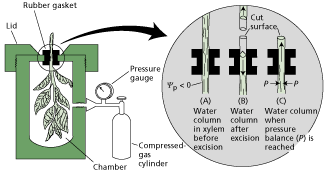 Web Figure 3.6.C   The pressure chamber method for measuring plant water potential. The diagram at left shows a shoot sealed into a chamber, which may be pressurized with compressed gas. The diagrams at right show the state of the water columns within the xylem at three points in time: (A) The xylem is uncut and under a negative pressure, or tension. (B) The shoot is cut, causing the water to pull back into the tissue, away from the cut surface, in response to the tension in the xylem. (C) The chamber is pressurized, bringing the xylem sap back to the cut surface.

The cryoscopic osmometer measures the osmotic potential of a solution by measuring its freezing point. Solutions have colligative properties that collectively depend on the number of dissolved particles and not on the nature of the solute. For example, solutes reduce the vapor pressure of a solution, raise its boiling point, and lower its freezing point. The specific nature of the solute does not matter. One of the colligative properties of solutions is the decrease in the freezing point as the solute concentration increases. For example, a solution containing 1 mol of solutes per kilogram of water has a freezing point of –1.86°C, compared with 0°C for pure water.

Various instruments can be used to measure the freezing-point depression of solutions (for two examples, see Prager and Bowman 1963, and Bearce and Kohl 1970). With a cryoscopic osmometer, solution samples as small as 1 nanoliter (10–9 L) are placed in an oil medium located on the temperature-controlled stage of a microscope (Web Figure 3.6.D). The very small sample size allows sap from single cells to be measured and permits rapid thermal equilibration with the stage. To prevent evaporation, the investigator suspends the samples in oil-filled wells in a silver plate (silver has high thermal conductivity). The temperature of the stage is rapidly decreased to about –30° C, which causes the sample to freeze. The temperature is then raised very slowly, and the melting process in the sample is observed through the microscope. When the last ice crystal in the sample melts, the temperature of the stage is recorded (note that the melting and freezing points are the same). It is straightforward to calculate the solute concentration from the freezing-point depression; and from the solute concentration (cs), Ψs is calculated as –RTcs.This technique has been used to measure droplets extracted from single cells (Malone and Tomos 1992). 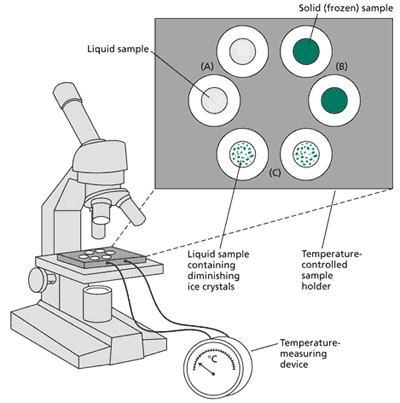 Web Figure 3.6.D   A cryoscopic osmometer measures the concentration of total dissolved solutes by measuring the freezing-point depression of a solution. (A) Very small liquid samples are loaded onto the temperature-controlled stage of a microscope. (B) When the temperature is quickly reduced, the samples supercool and freeze. (C) Slowly warming the stage causes the samples to thaw. The temperature at which the last ice crystal melts provides a measure of the melting point of the sample.

If a cell were as large as a watermelon or even a grape, measuring its hydrostatic pressure would be a relatively easy task. Because of the small size of plant cells, however, the development of methods for direct measurement of turgor pressure has been slow. Using a micromanometer, Paul Green at the University of Pennsylvania developed one of the first direct methods for measuring turgor pressure in plant cells (Green and Stanton 1967). In this technique, an air-filled glass tube sealed at one end is inserted into a cell (Web Figure 3.6.E). The high pressure in the cell compresses the trapped gas, and from the change in volume one can readily calculate the pressure of the cell from the ideal gas law (pressure × volume = constant). This method works only for cells of relatively large volume, such as the giant cell of the filamentous green alga Nitella. For smaller cells, the loss of cell sap into the glass tube is sufficient to deflate the cell and this yields artifactually low pressures. 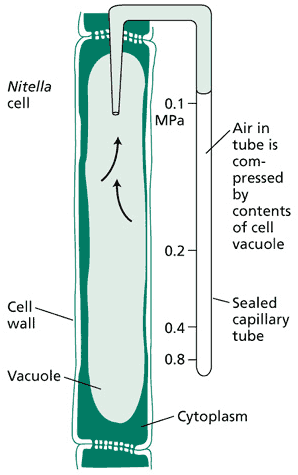 Web Figure 3.6.E   Use of the micromanometer, a pressure probe, to measure cell turgor pressure. Nitella cells (which are particularly large—about 100 mm in diameter and many centimeters long) were used for these measurements. (After Green 1968.)

For higher plant cells, which are several orders of magnitude smaller in volume than Nitella, a more sophisticated device, the pressure probe , was developed by Ernest Steudle, Ulrich Zimmermann, and their colleagues in Germany (Husken et al. 1978). This instrument is similar to a miniature syringe (Web Figure 3.6.F). A glass microcapillary tube is pulled to a fine point and is inserted into a cell. The microcapillary is filled with silicone oil, a relatively incompressible fluid that can be readily distinguished from cell sap under a microscope. When the tip of the microcapillary is first inserted into the cell, cell sap begins to flow into the capillary because of the initial low pressure of that region. Investigators can observe such movement of sap under the microscope and counteract it by pushing on the plunger of the device, thus building up a pressure. In such fashion the boundary between the oil and the cell sap can be pushed back to the tip of the microcapillary. When the boundary is returned to the tip and is held in a constant position, the initial volume of the cell is restored and the pressure inside the cell is exactly balanced by the pressure in the capillary. This pressure is measured by a pressure sensor in the device. Thus the hydrostatic pressure of individual cells may be measured directly. 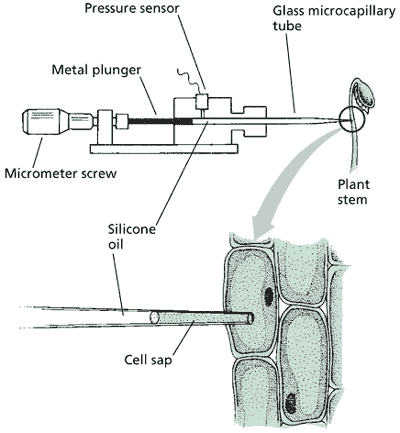 Web Figure 3.6.F   Diagram of the simplest pressure probe (not to scale). The primary advantage of this method over the one shown in Web Figure 3.6.E is that cell volume is minimally disturbed. Minimal disturbance is of great importance for the tiny cells that are typical of higher plants, in which loss of even a few picoliters (10–12 L) of fluid can substantially reduce turgor pressure.

This method has been used to measure Ψp and other parameters of water relations in cells of both excised and intact tissues of a variety of plant species (Steudle 1993). The primary limitation of this method is that some cells are too small to measure. Furthermore, some cells tend to leak after being stabbed with the capillary, and others plug up the tip of the capillary, thereby preventing valid measurements. The pressure probe has also been adapted to measure positive and negative values of Ψp in the xylem (Heydt and Steudle 1991). However, technical problems with cavitation (see textbook Chapter 4) limit the measurement of negative Ψp by this technique.