All plant parts exposed to the atmosphere are coated with layers of lipid material that reduce water loss and help block the entry of pathogenic fungi and bacteria. The principal types of coatings are cutin, suberin, and waxes (Web Figure 23.1.A). Cutin is found on most aboveground parts; suberin is present on underground parts, woody stems, and healed wounds. Waxes are associated with both cutin and suberin. 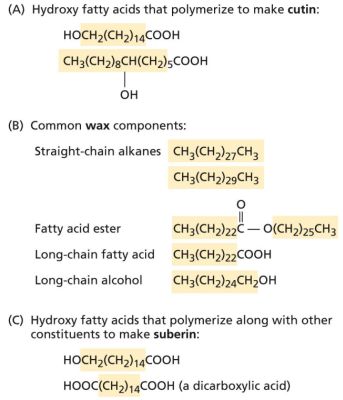 Cutin, waxes, and suberin are made up of hydrophobic compounds

Cutin is a macromolecule, a polymer consisting of many long-chain fatty acids that are attached to one another by ester linkages, creating a rigid three-dimensional network. Cutin is formed from 16:0 and 18:1 fatty acids with hydroxyl or epoxide groups situated either in the middle of the chain or at the end opposite the carboxylic acid function (see Web Figure 23.1.A, top).

Cutin is a principal constituent of the cuticle, a multilayered secreted structure that coats the outer cell walls of the epidermis on the aerial parts of all herbaceous plants (Web Figure 23.1.B). The cuticle is composed of a top coating of wax, a thick middle layer containing cutin embedded in wax (the cuticle proper), and a lower layer formed of cutin and wax blended with the cell wall substances pectin, cellulose, and other carbohydrates (the cuticular layer). It has been suggested that in addition to cutin, the cuticle may contain a second lipid polymer made up of long-chain hydrocarbons, which has been named cutan (Jeffree 1996). 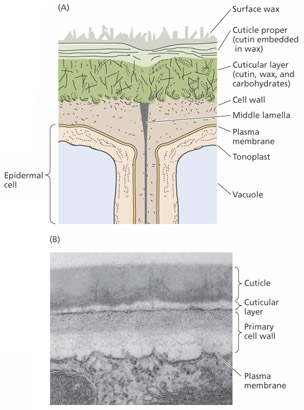 Web Figure 23.1.B   (A) Structure of the plant cuticle at the stage of full leaf expansion. (B) Electron micrograph of the cuticle of a glandular cell from a young leaf (Lamium sp.), showing the presence of the cuticle layers indicated in A. Surface waxes are not visible. (51,000×) (A after Jeffree 1996; B from Gunning and Steer 1996.)

Waxes are not macromolecules, but rather complex mixtures of long-chain acyl lipids that are extremely hydrophobic. The most common components of waxes are straight-chain alkanes and alcohols of 25 to 35 carbon atoms (see Web Figure 23.1.A, middle). Long-chain aldehydes, ketones, esters, and free fatty acids are also found in waxes. The waxes of the cuticle are synthesized by epidermal cells. They leave those cells as droplets that pass through pores in the cell wall by an unknown mechanism. The wax that forms the outer coating of the cuticle often crystallizes in an intricate pattern of rods, tubes, or plates (Web Figure 23.1.C). Certain patterns of these microstructures enhance water repellency by increasing the roughness of the wax surface. This roughness prevents water from forming large contact areas with, and thus from adhering to, the already hydrophobic surface. Thus water droplets form instantly on contact and carry away contaminating particles, cleansing the plant’s surface (Neinhuis et al. 1992). This phenomenon was first described for the leaves of the leguminous lotus Lotus japonicus,* and for that reason it is sometimes referred to as the “lotus effect.” 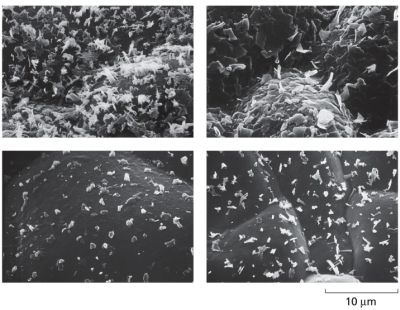 Suberin is a polymer whose structure is poorly understood. Like cutin, suberin is formed from hydroxy or epoxy fatty acids joined by ester linkages. However, suberin differs from cutin in that it has dicarboxylic acids (see Web Figure 23.1.A, bottom), more long-chain components, and a significant proportion of phenolic compounds as part of its structure.

Suberin is a cell wall constituent found in many locations throughout the plant. We have already noted its presence in the Casparian strip of the root endodermis, which forms a barrier between the apoplast of the cortex and the stele (see textbook Chapter 4). Suberin is a principal component of the outer cell walls of all underground organs and is associated with the cork cells of the periderm, the tissue that forms the outer bark of stems and roots during secondary growth of woody plants. Suberin also forms at sites of leaf abscission and in areas damaged by disease or wounding.

Cutin, suberin, and their associated waxes form barriers, between the plant and its environment, that function to keep water in and pathogens out. The cuticle is very effective at limiting water loss from aerial parts of the plant, but it does not block transpiration completely: even with the stomata closed, some water is lost. The thickness of the cuticle varies with environmental conditions. Plant species native to arid regions typically have thicker cuticles than do plants from moist habitats, but plants from moist habitats often develop thick cuticles when grown under dry conditions. Similarly, sun leaves and shade leaves of the same canopy often show different cuticle thicknesses.

The cuticle and suberized tissues are both important in excluding fungi and bacteria, although they do not appear to be as important in pathogen resistance as some other defenses, such as phytoalexin production and the hypersensitive response. Many fungi penetrate the plant surface directly by mechanical means. Others produce cutinase, an enzyme that hydrolyzes cutin and thus facilitates entry into the plant.

*Not to be confused with the aquatic lotuses of the Nymphaeaceae family.