Topic 22.1 Abscission and the Dawn of Agriculture

Topic 22.1 Abscission and the Dawn of Agriculture

Civilization as we know it is entirely dependent on an abundant food supply, which can be provided only by agriculture. Before the development of agriculture, people lived in small, nomadic groups whose migration patterns followed the seasonal availability of foods derived from wild plants and animals. The shift from hunting and gathering to cultivation and pastoralism led to the establishment of permanent settlements with ever-expanding populations. This transition, considered to be the most significant (and by some, the most disastrous!) cultural change in human history, was made independently at least seven times at various locations around the world (Smith 1995).

Remains of some of the earliest settlements are found in the region of the Near East called the Fertile Crescent, a broad arching zone of grassland and woodland that begins at the eastern edge of the Mediterranean and curves around some 2000 km eastward to the Zagros Mountains. One of the oldest known agricultural settlements in the world is found here, in the ancient city of Jericho, located 14 miles north of the modern city of Jericho in the Jordan Valley. Here archaeologists have unearthed evidence for a transition from hunting and gathering to agriculture that occurred around 10,000 years ago (Smith 1995).

The first step in the transition from hunting and gathering to agriculture was the domestication of plants and animals. The seven primary domesticates of the Fertile Crescent were barley, emmer wheat, einkorn wheat, sheep, goats, cattle, and pigs. The first of these to be domesticated were the cereals. The Mediterranean region is particularly well stocked with cereals suitable for domestication. Of the world's 56 species of large-seeded grasses, 32 grow wild in the Mediterranean area. Recent DNA analyses have pinpointed the area near the Karacadâg mountains in Turkey as the probable site of origin of einkorn wheat (Heun et al. 1997).

All the evidence suggests that wheat and barley were domesticated over a period of only 2 or 3 centuries, between 10,000 and 9700 B.P. (Smith 1995). Considering the large number of morphological and physiological differences between even the most primitive of the domesticated forms of wheat and barley today and their wild progenitors, it is difficult to envision how so many changes would come about in such a brief period by natural selection alone. Clearly, some type of artificial selection had to be carried out (most likely by women) to accelerate the evolutionary process. Archaeologists and botanists have attempted to reconstruct this selection process.

Of all the anatomical and physiological differences between wild and domesticated cereals, two are regarded as most crucial. The first is the loss of seed dormancy—the failure of certain seeds to germinate when planted in moist soil unless given additional environmental signals, such as cold or light. The process of plant domestication probably began in small garden plots planted near temporary settlements. It is easy to imagine how the loss of seed dormancy might be selected for by a nomadic group, since seeds that germinated and grew rapidly would be more likely to have been gathered than those whose germination was delayed.

The second critical change that took place during cereal domestication was the development of a tough rachis. The rachis is the main axis of the inflorescence, or spike, of wheat and other cereals, to which the spikelets are attached. Spikelets are small inflorescences bearing one or more florets, or small flowers, along with a set of miniature bractlike leaves. After pollination, the fruits (caryopses) develop within the spikelets. When the caryopses of the wild-type wheat are fully ripened, a series of abscission layers forms that divides the rachis into dispersal units consisting of a single spikelet attached to a short segment of the rachis (Web Figure 22.1.A). This disarticulation of the rachis begins at the top of the inflorescence and works its way downward. A ripe head of wild wheat is thus easily shattered into dispersal units when touched or blown by the wind and is referred to by archaeologists as a brittle rachis. 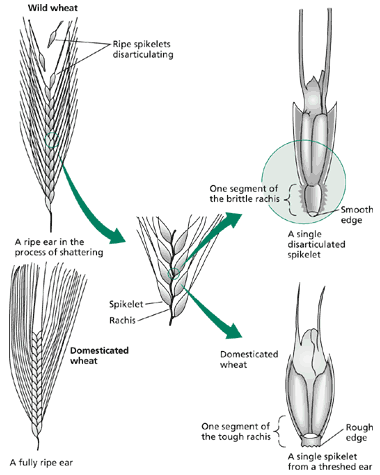 Web Figure 22.1.A   Wild versus domesticated forms of einkorn wheat. The spikelets of the wild variety abscise readily from the ripened head at abscission zones located nearby on the rachis, leaving a smooth abscission scar on the disarticulated spikelet. In contrast, the abscission zones of the domesticated varieties that have tough rachises fail to develop properly, and the spikelets remain on the head until released by threshing. Note that the breakage of the rachis below the spikelet leaves a rough edge, which tends to impede penetration into the ground.

A brittle rachis is an extremely undesirable trait from a human standpoint. Imagine the plight of a small nomadic group that carefully timed its peregrinations to coincide with the ripening of wild cereals. Because of the extreme fragility of the rachis, it would be crucial to arrive close to the time of ripening, but before disarticulation of the rachis. A slight miscalculation could spell disaster for the group. Arriving too late, they would be greeted by a field of barren stalks yielding only a handful of remnant grains. As a consolation, however, they might find the rare mutant spikes that remained intact because the abscission layers of the rachis failed to develop. This property is referred to by archaeologists as a tough rachis. If mutants with the tough-rachis phenotype were then gathered and planted in gardens, their numbers would, over time, increase.

A second scenario for the selection of a tough rachis involves the method of harvesting. The most efficient method for harvesting wheat is to cut it off at the base of the stalk, and evidence suggests that flint-bladed sickles were used for this purpose. However, harvesting wild wheat by cutting would have to be performed before formation of the abscission layers, or the fragile spikes would shatter, sending their spikelets flying to the ground. This method of harvesting would therefore favor the selection of mutations that delayed the abscission process. Hillman and Davies (1990a, 1990b) have demonstrated in field experiments that over many generations, the population would come to be dominated by the varieties with tough rachises. Once cut, the stalks of these varieties of wheat would then be transported to another location, where the grains would be removed by threshing.

Is the mutation rate in wild cereals rapid enough to account for their domestication in a period of only 200 to 300 years? Sharma and Waines (1980) have determined that two genetic loci are involved in the evolution of the tough-rachis character in einkorn wheat. Even if we assume that a mutation that converts a brittle rachis to a tough rachis occurs in only one out of every million wild-type wheat plants, Hillman and Davies (1990a, 1990b) have estimated that varieties with tough rachises would become the dominant forms in wild wheat populations after only 200 years of human management. Higher rates of mutation would shorten this time considerably, possibly to within 20 years.

Thus the experimental results and calculations are in good agreement with the archaeological evidence. Agriculture in the Fertile Crescent, which ultimately led to the founding of Greece and Rome and all of Western civilization, began with mutations in genes that control abscission.