There are three types of endosperm development in angiosperms: nuclear, cellular, and helobial (Web Figure 21.6.A). In the free nuclear type, which is the most common, the primary endosperm nucleus divides repeatedly without wall formation to produce a large number of free nuclei within the central cell cytoplasm (see Web Figure 21.6.A[a]). At the same time a central vacuole appears, which pushes the nuclei to the periphery of the coenocytic cell. The vacuole then decreases in size and ultimately disappears as the nuclei and cytoplasm proliferate. Finally, the multinucleate cytoplasm cellularizes to produce a multicellular tissue. In some cases, as in coconut, cellularization is incomplete.

In the cellular type of endosperm development, all of the nuclear divisions are accompanied by cell wall formation, so that the endosperm is cellular from the very beginning (see Web Figure 21.6.A[b]). Examples of plants with cellular endosperm include Impatiens, Datura, and Petunia. The helobial type of endosperm development is a rarer, intermediate form between the nuclear and cellular types (see Web Figure 21.6.A [c]). In most plants with helobial-type endosperm, first division of the primary endosperm nucleus is accompanied by the formation of a horizontal wall. The cell at the micropylar end of the embryo sac then undergoes multiple rounds of free nuclear divisions, while the nuclei in the cell at the chalazal end may cease to divide or divide only once or twice. Various angiosperm genera exhibit helobial-type endosperm, including Asphodelus (asphodel), Muscari (grape hyacinth), Saxifraga, and Echium (borage). Recent studies have recognized many variants of all three types of endosperm (Floyd and Friedman 2000). 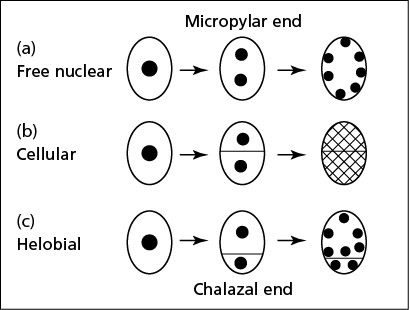 Web Figure 21.6.A The three traditionally recognized endosperm types. (From Floyd and Friedman, 2000).