There are two types of apomixis in plants, depending on the fate of the unreduced (diploid) cell. Both types arise in the diploid somatic tissue of the ovule. If the unreduced cell gives rise directly to an embryo, this type of asexual seed production is referred to as sporophytic apomixis. If an unreduced cell gives rise to a diploid embryo sac, the process is termed gametophytic apomixis. Web Figure 21.5.A compares sexual and apomictic pathways in angiosperm ovules. The important factor that distinguishes the sexual pathway from the apomictic pathway is the reductional division, or meiosis, of the unreduced somatic cells. 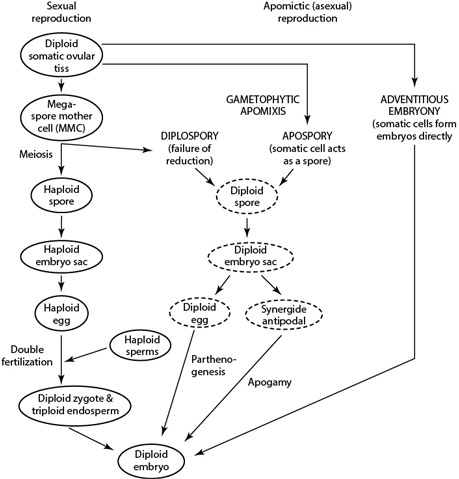 Web Figure 21.5.A Comparison of sexual and apomictic pathways in angiospermovules. Part A from: http://agritech.tnau.ac.in/crop_improvement/crop_imprv_repmode.html. (See also Koltunow, A., R. A. Bicknell and A. M. Chaudhury. 1995. Apomixis: Molecular strategies for the generation of genetically identical seeds without fertilization. Plant Physiol. 108: 1345–1352.)

Sporophytic apomixis, also referred to as adventitious embryony, is a process in which one or more vegetative embryos form within the nucellus or the integument of the ovule. In most cases sporophytic apomixis does not interfere with normal embryo sac formation in the nucellus, and in fact, it may even be stimulated by pollination and double fertilization. Typically, however, one of the apomictic embryos invades the embryo sac and outcompetes the sexual embryo for nutrients from the endosperm. Although sporophytic apomixis occurs rarely in angiosperms, it is common in Citrus and is often associated with multiple embryos, or polyembryony (Web Figure 21.5.B). 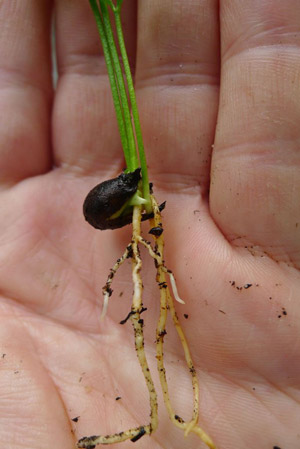 Web Figure 21.5.B Multiple seedlings grow from a single mandarin orange seed as the result of polyembryony. Photo courtesy of: http://jerry-coleby-williams.net/2012/08/25/natural-cloning-mandarin-style/polyembryony-triple-mandarin-embryo-citrus-reticulata-parramatta-sweets-2-2/

Gametophytic apomicts, unlike sporophytic apomicts, produce embryo sacs instead of embryos. Because they develop from unreduced cells, these embryo sacs are comprised of diploid cells. Of the plants known to exhibit gametophytic apomixis, about 75% belong to three families, the Asteraceae, Rosaceae, and Poaceae. There are two types of gametophytic apomicts: diplosporous and aposporous. In diplospory, the embryo sacs develop directly from the unreduced megaspore mother cell. In apospory, a different cell in the nucellus gives rise to an embryo sac. In both cases, the diploid egg cell develops into an embryo without being fertilized, a process termed parthenogenesis (literally, “virgin birth”). Diploid synergids and antipodals also have the potential to form embryos, in which case the process is referred to as apogamy (see Web Figure 21.5.A). Typically, diplosporous apomicts contain single embryo sacs within the ovule, whereas aposporous apomicts produce multiple embryo sacs. Polyembryony can thus result from either sporophytic or gametophytic apomixis.

Because mechanisms such as diplospory are directly dependent on the abnormal division of a meiotic precursor, mutations affecting meiosis have the potential to shed light on the process of apomixis. Although many candidate genes have been studied, the mechanism of apomixis has thus far eluded discovery.