Topic 21.4 The Molecular Mechanism of Cytoplasmic Sterility in Rice

Topic 21.4 The Molecular Mechanism of Cytoplasmic Sterility in Rice

Recently, researchers have elucidated the molecular mechanism of cytoplasmic male sterility (CMS) in the “wild abortive” or CMS-WA rice system, which is widely used in rice breeding. Originally discovered in a wild rice species in the 1970s, the WA cytoplasm has been backcrossed into the domesticated rice species, Oryza sativa, to produce the CMS-WA lines currrently used for production of hybrid rice seeds.

How does WA352 cause the death of anther cells? WA352 interacts with another mitochondrial protein, OsCOX11 (Oryza sativa COX11), and inhibits its function (Figure 21.4.A, center panel). OsCOX11 is an assembly factor for cytochrome c oxidase, which plays a key role in mitochondrial respiration. A cox11 mutant in yeast exhibits high levels of reactive oxygen species (ROS), cytochrome c release from mitochondria, and programmed cell death. Similarly, WA352 in rice anther mitochondria causes high levels of ROS, cytochrome c release into the cytosol, and ROS-induced programmed cell death of the anther tapetal cells. Thus, WA352 in rice anthers mimics the effects of a mutation in the COX11 gene in yeast. 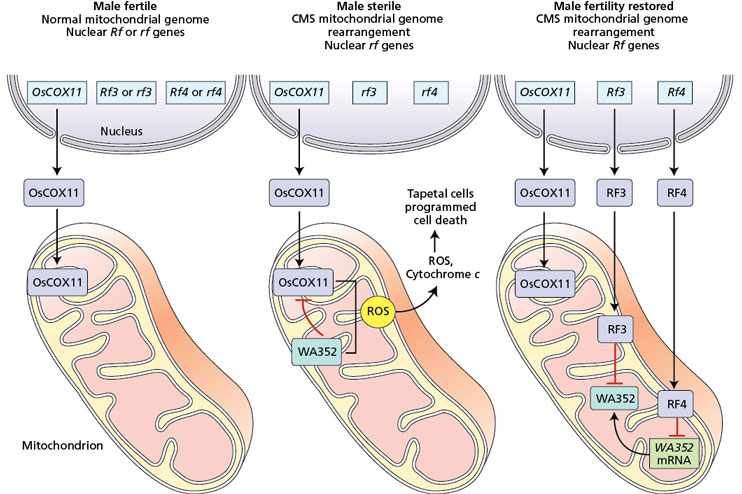 When CMS lines are used in hybrid seed production, the pollen donor, which contributes no mitochondria to the zygote, must carry nuclear genes that can restore fertility, so that the hybrid seed will produce self-fertile plants (Figure 21.4.B). These nuclear genes are referred to as Restorer of Fertility (Rf) genes. The vast majority of these genes contain tandem arrays of a degenerate 35-amino-acid repeat sequence called pentatricopeptide repeats (PPR). In plants, the proteins encoded by members of this gene family, which number over 400 in Arabidopsis, function in both chloroplasts and mitochondria. PPR proteins are required for proper processing and translation of normal organellar transcripts, but they also have the ability to inactivate the rearranged, chimeric transcripts found in CMS plants, thus reversing the CMS phenotype. 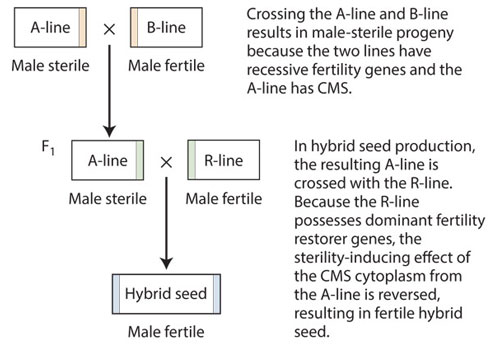 Web Figure 21.4.B Use of cytoplasmic male sterile (CMS) lines in plant breeding. This system of breeding uses three separate lines: a Cytoplasmic Genetic Male Sterile line (CGMS line) or A-line; a Maintainer line or B-line, which has normal cytoplasm, fertile pollen, and recessive fertility restorer genes to maintain the CMS; and a Restorer line or R-line with dominant fertility restorer genes to produce hybrid seeds.

In WA rice, male fertility can be restored by either the Rf3 or Rf4 gene. Both of these genes markedly reduce the amount of WA352 protein in the anthers of WA rice, but they act via distinct mechanisms. Rf4 protein seems to act either transcriptionally or posttranscriptionally to reduce WA352 transcript levels, while Rf3 seems to act either translationally or posttranslationally to prevent WA352 protein accumulation (see textbook Figure 21.4.A, center panel).