As we have seen, the Maryland Mammoth mutation converts a day-neutral variety of tobacco into an SDP. Analysis of this flowering-time mutant by W. Garner and H. Allard led to the discovery that plants can measure photoperiod as an environmental cue for floral induction, and it identified the Maryland Mammoth gene as one of the genes that regulates this process.

The most extensive studies of flowering-time genes have been performed in pea (Pisum sativum) and Arabidopsis thaliana (Weigel 1995; Reid et al. 1996). In these species a range of mutations can alter various aspects of the photoperiodic control of flowering. For example, mutations in certain genes convert these LDPs into day-neutral plants that can flower rapidly. Mutations in other genes result in day-neutral plants that exhibit a long delay in flowering.

Since most biological regulatory systems are under both positive and negative control, it is not surprising to find mutations that promote or delay flowering. Inasmuch as most mutations result in a loss or reduction of gene activity, the wild-type role of genes that delay flowering when mutated is to promote flowering.

Similarly, mutations that promote flowering are likely to occur in genes that normally inhibit the process. These genes are promoters and inhibitors of flowering in genetic terms, but the mutant phenotype alone does not usually reveal the flowering mechanism that is affected. For example, a mutation that eliminates the response to photoperiod could either block the production of a flowering hormone (floral stimulus) or, alternatively, interfere with the ability of the target cells in the meristem to receive the hormonal signal (meristem competence).

Arabidopsis plants containing mutations that promote or delay flowering have been isolated. Web Figure 20.8.A shows the wild type and a gigantea (gi) mutant that were grown in inductive photoperiods (long days). The plants are shown at the stage when flower buds have become visible. Flowering in the gigantea mutant is delayed; thus this plant has been growing approximately three times as long as the wild type and has formed many more leaves from the primary apical meristem. 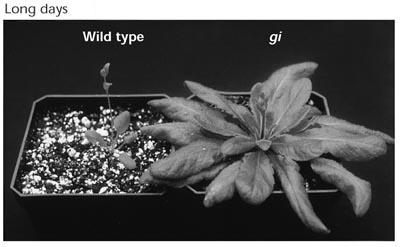 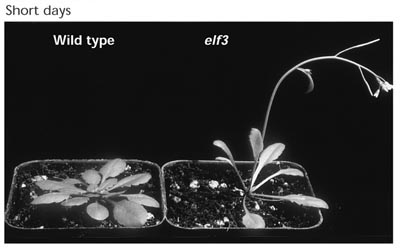 One way to explore the role of these genes is through grafting studies. For example, if the apical bud from a mutant plant with a delayed-flowering phenotype flowers normally when grafted onto a wild-type shoot, the mutant shoot apex is clearly competent to receive and respond to flowering signals. One might then suspect that the mutation affects the production of flowering signals by leaves. If this were the case, a wild-type shoot apex region should exhibit delayed flowering when grafted onto a mutant shoot.

For example, the GIGAS gene is thought to be involved in the production of a transmissible flowering promoter. The wild-type pea exhibits a quantitative LDP phenotype. Plants homozygous for the recessive gigas mutation exhibit severely delayed flowering. For example, when grown under a 16-hour photoperiod, the wild-type flowers after producing 16 leaves, whereas the gigas mutant flowers after producing 43 leaves. Delayed flowering in gigas plants could be caused either by the presence of inhibitors or by the absence of a floral stimulus.

To test for inhibitors, researchers grafted the shoot of an early flowering day-neutral line onto gigas stock. The time of flowering of the scion was unaffected by grafting to the mutant, indicating that the mutant does not produce flowering inhibitors. However, when a gigas shoot was grafted onto either the early-flowering or the wild-type stock, flowering was greatly accelerated. Instead of flowering after producing 40 leaves or more, the plants flowered after producing only 14 or 23 leaves, respectively (Beveridge and Murfet 1996).

Because the gigas mutant shoot apex flowers readily after grafting, its ability to respond to the flowering stimulus from the leaves is not affected by the mutation. The mutation is therefore thought to affect the production of a floral stimulus.

Another approach to elucidating the floral induction process is to isolate the genes identified by mutations and to study their properties. Once the gene is cloned, the encoded protein can be overexpressed in E. coli and purified in sufficient quantities to study its biochemical properties and to produce specific antibodies. The antibodies can be used to determine the tissues in which the protein is produced, as well as its location within the cell. The localization may provide clues to the function of the protein. For example, a protein in the shoot apex may be involved in the reception of flowering signals, whereas a protein present in the leaves may be involved in the production of flowering signals.

The constans mutants of Arabidopsis are insensitive to day length and flower later than the wild type under long-day conditions. The CONSTANS gene of Arabidopsis has been cloned and shown to encode a protein that shows similarities to zinc finger transcription factors, suggesting that it acts as a transcriptional regulator (see textbook Chapter 15). The wild-type CONSTANS gene is expressed in leaves, and the level of CONSTANS mRNA increases during inductive photoperiods (Putterill et al. 1995).