Topic 20.4 Competence and Determination are Two Stages in Floral Evocation

Topic 20.4 Competence and Determination are Two Stages in Floral Evocation

The term juvenility has different meanings for herbaceous and woody species. Whereas juvenile herbaceous meristems flower readily when grafted onto flowering adult plants (see Web Topic 20.3), juvenile woody meristems generally do not. What is the difference between the two?

Extensive studies in tobacco (Nicotiana tabacum, an herbaceous plant) have demonstrated that floral evocation requires the apical bud to pass through two developmental stages (Web Figure 20.4.A). One stage is the acquisition of competence. A bud is said to be competent if it is able to flower when given the appropriate developmental signal.

Web Figure 20.4.A  A simplified model for floral evocation at the shoot apex in which the cells of the vegetative meristem acquire new developmental fates. To initiate floral development, the cells of the meristem must first become competent. A competent vegetative meristem is one that can respond to a floral stimulus (induction) by becoming florally determined (committed to producing a flower). The determined state is usually expressed, but this may require an additional signal. (After McDaniel et al. 1992.)

For example, if a vegetative shoot (scion) is grafted onto a flowering stock and the scion flowers immediately, it is demonstrably capable of responding to the level of floral stimulus present in the stock and is therefore competent. Failure of the scion to flower would indicate that the shoot apical meristem has not yet attained competence.

The next stage that a competent vegetative bud goes through is determination. A bud is said to be determined if it progresses to the next developmental stage (flowering) even after being removed from its normal context. Thus a florally determined bud will produce flowers even if it is grafted onto a vegetative plant that is not producing any floral stimulus. As we will discuss later in this chapter, the molecular mechanisms underlying floral determination are beginning to be understood.

In a strain of day-neutral tobacco, plants typically flower after producing about 41 leaves or nodes. In an experiment to measure the floral determination of the axillary buds, flowering tobacco plants were decapitated just above the thirty-fourth leaf (from the bottom). Released from apical dominance, the axillary bud of the thirty-fourth leaf grew out, and after producing about seven more leaves (for a total of 41), it flowered (Web Figure 20.4.B, part a). However, if the thirty-fourth bud was excised from the plant and either rooted or grafted onto a stock without leaves near the base, it produced nearly a complete set of leaves before flowering. These results show that the thirty-fourth bud was not yet florally determined.

In another experiment, the donor plant was decapitated above the thirty-seventh leaf. This time the thirty-seventh axillary bud flowered after producing only about four leaves in all three situations (Web Figure 20.4.B, part b). This result demonstrates that the terminal bud became florally determined after initiating 37 leaves. 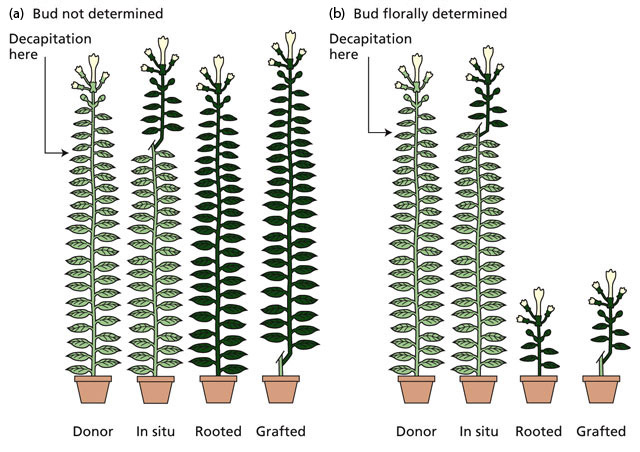 Web Figure 20.4.B  Demonstration of the determined state of axillary buds in tobacco. A specific axillary bud of a flowering donor plant is forced to grow, either directly on its own plant (in situ) by decapitation of the shoot, as a rooted cutting, or as a scion grafted to the base of the plant. The new leaves and flowers produced by the axillary bud are indicated by shading. (a) Result when the bud is not determined. (b) Result when the bud is florally determined. (After McDaniel 1996.)

Extensive grafting of shoot tips among tobacco varieties has established that the number of nodes a meristem produces before flowering is a function of two factors: the strength of the floral stimulus from the leaves and the competence of the meristem to respond to the signal.

In some cases the expression of flowering may be delayed or arrested even after the apex becomes determined, unless it receives a second developmental signal that stimulates expression. For example, intact darnel ryegrass (Lolium temulentum) plants become committed to flowering after a single exposure to a long day. If the Lolium shoot apical meristem is excised 28 hours after the beginning of the long day and cultured in vitro, it will produce normal inflorescences in culture, but only if the hormone gibberellic acid (GA) is present in the medium. Because apices cultured from plants grown exclusively in short days never flower, even in the presence of GA, we can conclude that long days are required for determination in Lolium, whereas GA is required for expression of the determined state.

In general, once a meristem has become competent, it exhibits an increasing tendency to flower with age (leaf number). For example, in plants controlled by day length, the number of short-day or long-day cycles necessary to achieve flowering is often fewer in older plants (Web Figure 20.4.C). As will be discussed later in the chapter, this increasing tendency to flower with age has its physiological basis in the greater capacity of the leaves to produce a floral stimulus. 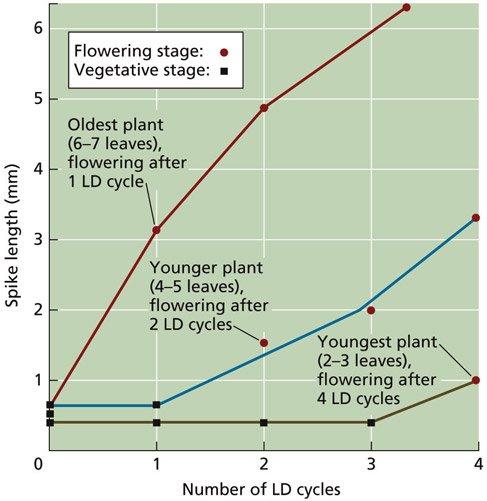 Web Figure 20.4.C  Effect of plant age on the number of long-day (LD) inductive cycles required for flowering in the long-day plant darnel ryegrass (Lolium temulentum). An inductive long-day cycle consisted of 8 hours of sunlight followed by 16 hours of low-intensity incandescent light. The older the plant is, the fewer photoinductive cycles are needed to produce flowering.