Topic 20.12 Variations of the ABCE Model are Found in Other Species

Topic 20.12 Variations of the ABCE Model are Found in Other Species

While the ABCE model was formulated based on genetic experiments in Arabidopsis and snapdragon (Antirrhinum), much of its value stems from the fact that it can help us understand how flowers are specified in diverse plants. Flowers from different species have evolved a variety of structures, and it appears this has been achieved by modifying the underlying regulatory networks described by the ABCE model. For example, in the Liliaceae, the outer two whorls contain petal-like structures called tepals, instead of sepals and petals, followed by stamens and carpels (Web Figure 20.12.A, part a). To understand this morphology in the context of the ABCE model in tulip (Tulipa gesneriana) flowers, it was proposed that B-gene activity in tulips had spread to whorl 1, thus making the sepals more petal-like. Later, when B-class genes were identified in tulip, it was shown that this was indeed the case: the B-class genes, GLO, DEFA, and DEFB are all expressed in the outer whorl (Web Figure 20.12.A, part b). 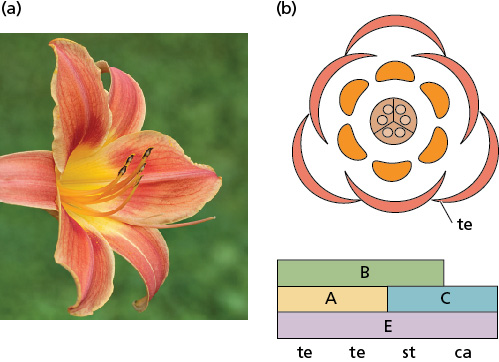 The flowers of rice and other members of the grass family are even more divergent from those of Arabidopsis (Web Figure 20.12.B, part a). The flowers are enclosed by two basal bracts called glumes. The outermost whorls of the flower consist of scale-like structures called the lemma and palea. The next whorl consists of the lodicule, a set of two or three additional scale-like structures, followed by the stamens and carpel. Studies of rice and maize have shown that class B genes are similar in grasses and eudicots: these genes specify the identities of the lodicule and stamen in the same way that B class genes specify the identities of the petal and stamen in eudicots (see Web Figure 20.12.B, part b). Loss of the single AP3/DEF-like gene in rice (the SUPERWOMAN1 mutant) results in replacement of lodicules by palea-like organs, and the replacement of stamens by carpels. These homeotic transformations resemble those observed in Arabidopsis and Antirrhinum class B mutants, indicating that paleas and lemmas are homologous to sepals, and lodicules are homologous to petals. Rice also contains the class C gene MADS3, which is required for stamen formation. An additional gene, DROOPING LEAF (DL), which encodes a YABBY transcription factor containing zinc-finger and helix-loop-helix domains, is specifically required for carpel formation in rice. 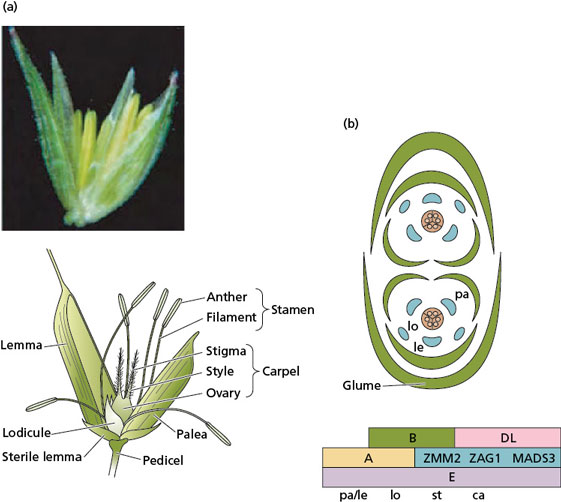