Topic 20.10 The Self-Propagating Nature of the Floral Stimulus

Topic 20.10 The Self-Propagating Nature of the Floral Stimulus

In at least three cases—Xanthium (SDP), Bryophyllum (SLDP), and Silene (LDP)—the induced state appears to be self-propagating (Zeevaart 1976). That is, young leaves that develop on the receptor plant after it has been induced to flower by a donor leaf can themselves be used as donor leaves in subsequent grafting experiments, even though these leaves have never been subjected to an inductive photoperiod. This phenomenon is called indirect induction. 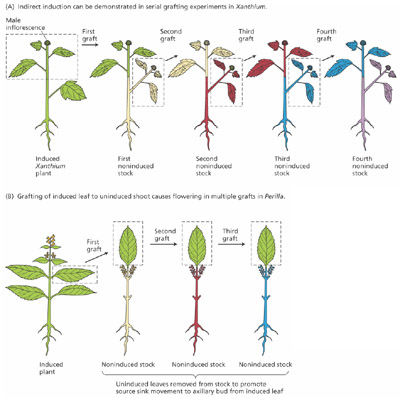 Web Figure 20.10.A   Different types of leaf induction in Xanthium and Perilla. (A) Xanthium exhibits indirect induction. Noninduced leaves from a plant induced to flower are capable of inducing other plants to flower even though they have never received an inductive photoperiod. This suggests that the floral stimulus is self-propagating. (B) In Perilla, only the leaf given the inductive photoperiod is capable of serving as a donor for the floral stimulus. In Perilla as well as Xanthium, one leaf can continue to induce flowering in successive grafting experiments. (Lang 1965).

On the other hand, indirect induction does not occur in the SDP Perilla. In Perilla, only the leaf actually given an inductive photoperiod is capable of transmitting the floral stimulus in a grafting experiment (see Web Figure 20.10.A, part B). Thus the floral stimulus of Perilla is not self-propagating as it is in Xanthium, Bryophyllum, and Silene. Either the mechanism for a positive feedback loop is absent in Perilla leaves, or translocation of the floral stimulus is restricted to the meristem so that it never enters the leaves.

Unlike Xanthium, which requires the presence of a bud for stable induction, Perilla leaves can be stably induced even when detached from the plant. Once induced, Perilla leaves cannot be uninduced, and the same leaf can continue to serve as a donor of the floral stimulus in successive grafting experiments without any reduction in potency (Zeevaart 1976).