Another powerful method for cloning genes and understanding gene function with mutants is the use of transposons in a technique called transposon tagging (Web Figure 2.3.A). As we discussed in Chapter 2 of the text (see Figure 2.2), transposable elements can change their genomic location upon activation of their transposase, causing transposition of the element. If the activated transposon inserts inside the coding or regulatory sequence of a gene, disruption of the reading frame can lead to a loss of gene function. Transposons can therefore be mutagenic. Genes that are disrupted with a transposon of known sequence are much easier to map than are mutants that arise from just a single nucleotide change (as described in Web Topic 2.2). To systematically use transposons in a mutagenesis experiment, genetic lines with inactive or non-autonomous transposons are crossed with lines containing an active or autonomous transposon. The offspring carrying an autonomous transposon that is transcribing transposase can mobilize the non-autonomous transposon. The reactivated transposon is now free to insert randomly into new sequences within the genome, causing mutations in the offspring. If the mutation is caused by the non-autonomous transposon copy, the mutation will be stable in subsequent generations if the autonomous element can be segregated away. Since the transposon is found on only one copy of a chromosome (one could say it is hemizygous), one can select for offspring that do not carry the active transposon, yet have sustained a mutation from the non-autonomous element. Hundreds or even thousands of individuals from the next generation can then be screened for a new mutation of interest. What makes the tagging approach so powerful is the relative ease with which the newly transposon-disrupted gene can be identified in the screening population. Since the sequence of the transposon used for the tagging approach is known, primers can be synthesized matching the transposon. Using inverse PCR, the regions adjacent to the mutation-inducing tranposon can be identified (see Web Figure 2.3.A). 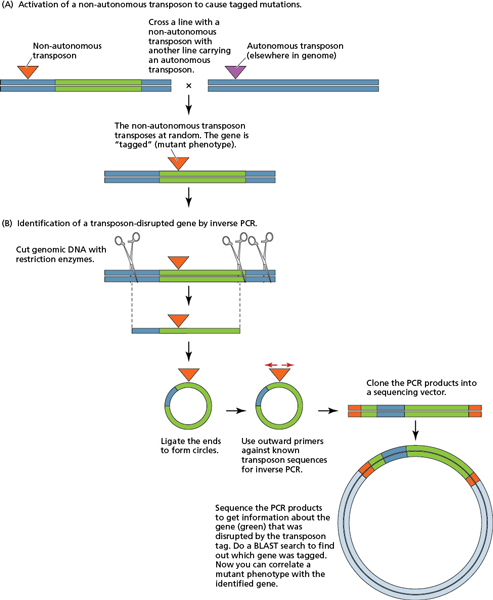