Most of the DNA in both plant mitochondria and plastids is found in linear molecules that may contain more than one copy of the genome. These copies are connected to one another and can be highly branched, resembling a bush or tree (Oldenburg and Bendich 1998, 2004), unlike the simpler, unbranched structures of nuclear chromosomes (Web Figure 2.1.A)

In plants, plastids are frequently inherited from only one of the two parents (uniparental inheritance). In species with maternal inheritance of plastids, the paternal plastids are excluded as a consequence of the way the male gametophyte (pollen) is formed. Pollen formation involves two mitotic divisions of the microgametophyte. The first division results in a vegetative cell, which gives rise to the pollen tube, and to a much smaller generative cell, which will later produce the two sperm cells. During the first division, plastids are excluded from the generative cell and thus the male germ line. Consequently, the zygote gets all its plastids from the egg in the female megagametophyte, resulting in maternal inheritance of plastid genes (Mogensen 1996).

The mechanism for paternal inheritance of plastids in some conifers, such as Douglas fir (Pseudotsuga menziesii) and Chinese pine (Pinus tabulaeformis), is slightly more complicated and less well understood. In many gymnosperms the second mitotic division, which produces the two sperm nuclei, occurs just as the pollen tube enters the female gametophyte. Paternal cytoplasm rich in plastids and some mitochondria clings to the sperm nucleus that enters the egg cell. At the time of fertilization, the egg nucleus is surrounded by maternal mitochondria but the maternal plastids are located in the periphery of the egg cell. After fusion of the sperm and egg nuclei and formation of the zygote, cellularization follows in such a fashion that the new cell walls exclude all the maternal plastids and most of the paternal mitochondria from the embryo (Mogensen 1996; Guo et al. 2005). 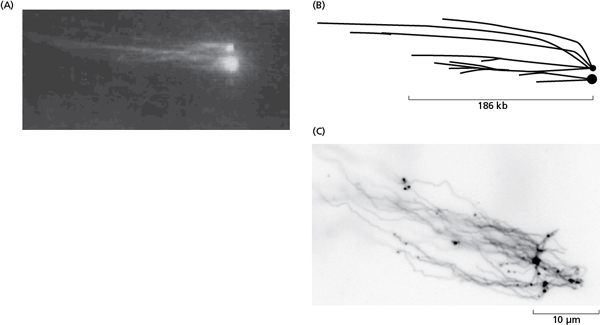 Web Figure 2.1.A The complex structure of mitochondrial and plastid genomes. Each photograph shows a single branched DNA molecule containing multiple connected organellar genomes. (A) Micrograph of ethidium-stained mitochondrial DNA from the liverwort Marchantia polymorpha. (B) Line drawing of the same molecule. The 186 kb scale bar shows the size of one genome. (C) Micrograph of multigenomic chloroplast DNA from maize, stretched out in agarose. The 10 µm scale bar is equivalent to 30 kb of DNA sequence, which is approximately 20% of the total genome length (154 kb). (A and B from Oldenburg and Bendich 1998; C from Oldenburg and Bendich 2004.)