If animals can be thought of as “elaborate sculptures of protein,” then plants are elaborate sculptures of cellulose. The shape of a plant is ultimately determined by the shapes of its cells and their surrounding cell walls. In turn, the shapes of plant cells are determined by constraints imposed by the cell wall during cell expansion. During the expansion of individual plant cells, the cell elongates orthogonally (that is, at right angles) to the angle of cellulose microfibrils in the cell wall, the orientation of which is controlled by the cell’s cortical microtubules (see textbook Chapters 1 and 14). Thus, the shape of the cell (and the shape of the plant) is ultimately determined by microtubules. But what controls orientation of the microtubules?

There is growing support for the idea that mechanical factors operating within the meristem determine the microfibril angles, and hence the mechanical properties, of the individual cells. According to this model, the meristem behaves much like a single cell, with the epidermal layer serving as the cell wall that limits expansion, and the interior cells acting like the central vacuole that drives expansion. The epidermis is thus under tension, while the internal tissues are under compression.

Like a cell wall, the tension on the epidermal layer can be divided into two main components, tangential stress and longitudinal stress. Due to the geometry of the shoot apical meristem (SAM), the ratio of the two stress components differs from region to region (Web Figure 19.2.A). In the central zone (CZ) and the tips of the leaf primordia, the stress on the epidermis is isotropic, that is, equal in all directions. In contrast, the stresses on the epidermis in the crease between the primordium and the meristem and the subapical region of the stem are both strongly anisotropic, as shown in Web Figure 19.2.B (Parts A and B). In the crease, the longitudinal stress is dominant, whereas in the stem the tangential stress is dominant.

Microtubules tend to align along the axes of principal stress, indicating that cells within the meristem respond to stress vectors by reinforcing their wall strength along the appropriate axis. Thus, the cells of the crease region, where the longitudinal stress dominates, develop anisotropically oriented microtubules that run parallel to the direction of the longitudinal stress (Web Figure 19.2.B, Parts B and C). Similarly, in the stem region below the leaf primordium, where the dominant stress is tangential, the cells develop microtubules that are aligned in the transverse direction. In contrast, the cells at the tip of the meristem, where the wall stress is isotropic, develop isotropically-oriented microtubules. 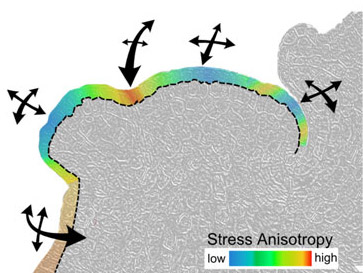 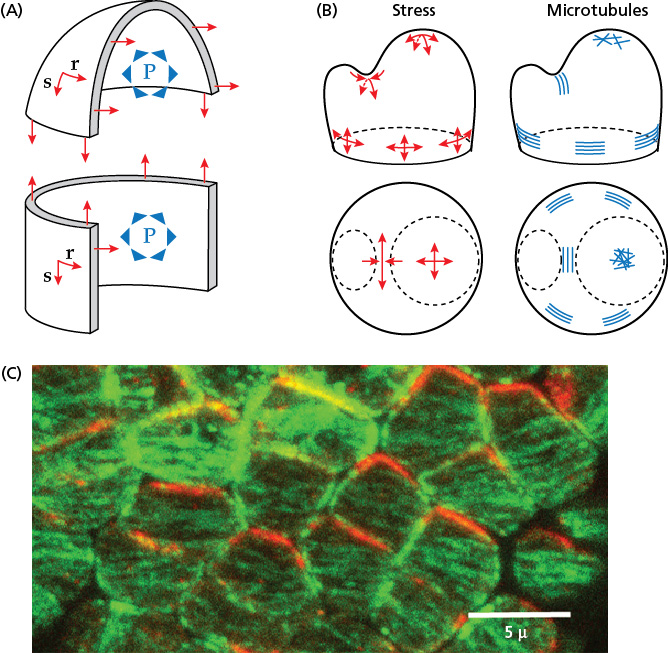 Web Figure 19.2.B  Mechanical stress patterns in the SAM of Arabidopsis. (A) The meristem is modeled as a pressure vessel. Each point on the SAM has a coordinate in the orthoradial (r) and meridional (s) directions, and P is the pressure exerted by the internal tissues on the L1 layer. (B) The observed direction of microtubules (right) is in agreement with the highest-stress orientations (left). (C) Microtubule and PIN1 protein orientations in the boundary domain (crease region) between the leaf primordium and the SAM: PIN1 (red) and microtubule (green) patterns are correlated. Scale bar: 5 mm. (A and B, after Hamant et al. 2008; C from Heisler et al. 2010.)

Recent studies have shown that mechanical stress may also determine the polarity of PIN1 distribution on the plasma membrane. PIN1 proteins are specifically localized to plasma membrane domains that are parallel to the microtubule orientations, as shown for the crease region. Such a configuration of PIN1 in the crease region of the meristem favors polar transport of auxin toward the developing leaf primordium, as indicated in textbook Figure 19.2D. Thus, it appears that both PIN1 localization and microtubule orientation during leaf initiation are likely to respond to a shared upstream regulator that appears to be biomechanical in nature.