When the radicle emerges from the seed coat, gravity may be the first force that it encounters, but the root will also encounter forces imposed by the soil. Depending on where the seed ended up, the soil might be predominantly sand, clay, loam, or some other structure. The plant responds to obstacles in the soil, such as rocks, and redirects growth around them (thigmotropism) until it can resume growth in alignment with the gravity vector.

In contrast to gravitropic bending, localized changes in internal Ca2+ pools have been observed in root thigmotropic responses. In Arabidopsis, rapid changes in Ca2+ levels have been shown to initiate independent increases in reactive oxygen species and decreases in plasma membrane pH gradients. In nature, root growth responses are an integration of gravitropic and thigmotropic stimuli.

The “wavy root” syndrome, first described by Charles Darwin in The Power of Movement in Plants, is a good example of the integration of gravitropism, thigmotropism, and circumnutation signaling. When Arabidopsis seedlings are grown on an agar plate inclined at 60 degrees, the roots develop a wavy pattern due to these three signals (Web Figure 18.5.A). Initially the roots tend to grow downward in response to gravity, but upon touching the agar they tend to grow upward due to negative thigmotropism. Superimposed on both of these signals is circumnutation, the tendency for the root tip to oscillate in a spiral growth pattern. The resultant of these three interacting factors is a wavy growth pattern. 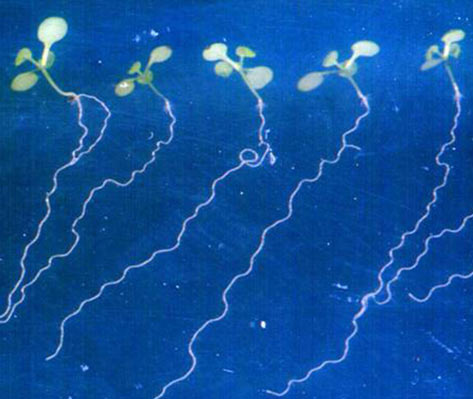 Web Figure 18.5.A Thigmotropism in roots. Arabidopsis seedlings growing in a petri dish inclined at 60° from the vertical. The roots grow in a wavy pattern due to the interaction of gravitropism, thigmotropism, and circumnutation. (Photo courtesy of Dr. Alessio Fortunati.)

Shoots also respond to thigmotropic stimuli: Plant height is reduced by repeated touch, and windswept trees have growth habits that bend away from the wind. Twining stems and their specialized organs, such as the tendrils of peas and morning glories, respond positively to touch and wrap around the stem of another plant or a garden fence, thereby supporting the plant as it continues to grow upwards (see Web Figure 18.5.B). These thigmotropic responses may be mediated by mechanosensitive channels (MscS) which reside on membranes. Among these are the Mid1-Complementing Activity (MCA) family proteins, which are involved in Ca2+ uptake, and the MscS-Like (MSL) family proteins, which are non-selective for ions and are gated by tension. 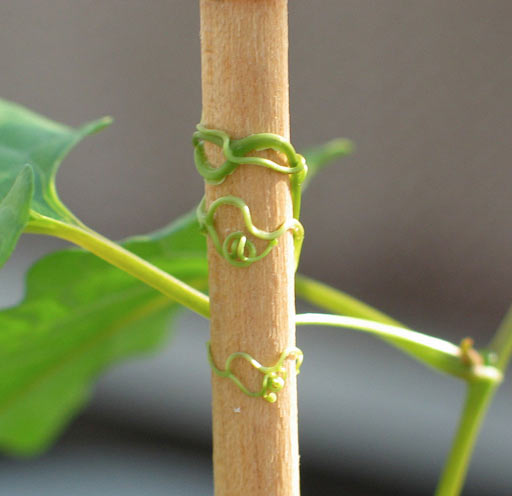