Topic 18.2 Seedling Growth Can Be Divided into Two Types: Epigeal and Hypogeal

Topic 18.2 Seedling Growth Can Be Divided into Two Types: Epigeal and Hypogeal

Angiosperm seedlings fall into two main classes with respect to the fates of their cotyledons during the growth of the axis. Seedlings that raise their cotyledons above the soil surface are said to be epigeal, while those whose cotyledons remain in the soil are termed hypogeal. The position of the elongating axis relative to the site of attachment of the cotyledons generally determines whether the seedling will be epigeal or hypogeal. For example, the initial elongating region of the seedling shoot axis in garden bean (Phaseolus), castor bean (Ricinus), and onion (Allium) is the hypocotyl, located below the cotyledonary node (Web Figure 18.2.A). Thus, when the hypocotyl elongates it lifts the cotyledon(s) above the soil. The internode immediately above the cotyledonary node is called the epicotyl. In most epigeal seedlings both the hypocotyl and epicotyl elongate. In contrast, only the epicotyl elongates in hypogeal seedlings, such as in pea (Pisum). The seeds of members of the grass family are also hypogeal, although the anatomy of the shoot axis is somewhat different. For example, in maize (Zea) the axis directly above the modified cotyledon, or scutellum, is called the mesocotyl (see Web Figure 18.2.A, part e). For deeply planted seeds, the mesocotyl helps to raise the shoot closer to the soil surface. 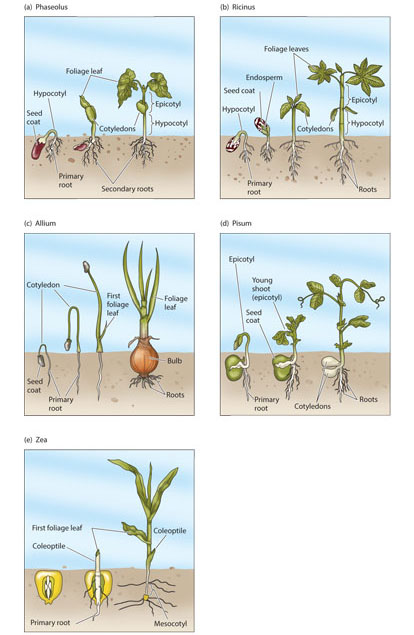