Topic 18.1 The Evolution of Seeds

Topic 18.1 The Evolution of Seeds

The origin and evolution of seeds is a fascinating story that began in the late Devonian, about 370 million years ago. The earliest seed plants emerged from a diverse group of spore-bearing plants called progymnosperms, which eventually gave rise to both the gymnosperms and the angiosperms (Web Figure 18.1.A). The progymnosperms combined a fern-like reproductive cycle with vegetative structures typical of seed plants. Their dispersal units were spores that developed into gametophytes, which produced the male and female gametes. Like ferns, fertilization in progymnosperms was probably mediated by flagellated sperm, which required water for mobility. In contrast, pollen evolved in seed plants as a vehicle for delivering sperm to the female gametophyte, allowing fertilization to take place in the absence of water.

Some of the major structural changes associated with the evolution of seeds are illustrated in Web Figure 18.1.B. In the extinct seed ferns and modern gymnosperms, the multicellular haploid megagametophyte surrounds the embryo and is the major source of nutrients (See Figure 18.1.B, parts a and b). In the basal angiosperms (Nymphaeaceae), the main nutritive tissue is the perisperm, derived from maternal tissue, with a minor contribution from the diploid endosperm, a product of double fertilization (See Figure 18.1.B, part c). In both the basal and core eudicots the triploid endosperm serves as the primary nutritive tissue of the seed, often supplemented by storage cotyledons (See Figure 18.1.B, parts d and e). All seeds are surrounded by a protective outer layer of dead cells called the testa, or seed coat. However, the testa may sometimes be fused to the pericarp or “fruit wall,” derived from the ovary wall. In this case the “seed” is actually a fruit. Web Table 18.1.A lists some familiar examples of true seeds versus fruits that resemble seeds. 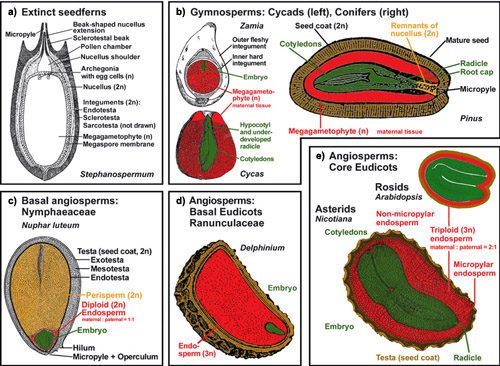