Our undersanding of the mechanics of meristem function has been enhanced by investigations of the apical meristems of ferns and other primitive vascular plants. The root and shoot apical meristems of these organisms have a single large apical cell, which resides at the center of the meristem. The apical cell is the ultimate source of all the cells in the meristem, as well as the root or shoot body. Brian Gunning at the Australian National University studied in detail the patterns of cell divisions in roots of the water fern Azolla (Gunning 1982).

Azolla roots are unusual in that they do not grow throughout the life of the plant. The Azolla root is a determinate organ, and the root meristem has a genetically determined limit to its growth. This condition is in contrast to most roots, in which the activity of the meristem is indeterminate—growth persisting as long as environmental conditions permit it.

The Azolla apical cell, which is shaped something like a pyramid with four more or less triangular sides, divides only 50 to 55 times, cutting off derivative cells in each of its four planes, before it stops dividing entirely. With the exception of the root cap, all the cells in the Azolla root can be traced to the apical cell, whose division planes are determined with great precision (Web Figure 17.4.A). 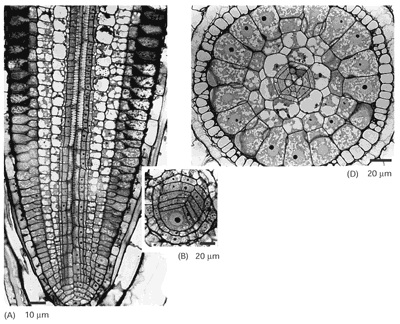 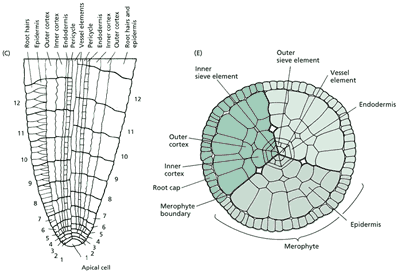 Web Figure 17.4.A   Cells divide in a precise pattern during root development in the water fern Azolla pinnata. (A) This precise pattern of cell division is evident in longitudinal sections of the root. (B) Shown here at higher magnification, the single apical cell divides at the three triangular faces to form wedge-shaped cells called merophytes. (C) This diagram of the root identifies the 12 merophytes that form on each side of the root. Subsequent divisions of each merophyte are also in a precise pattern to generate a specific number of cells that will differentiate according to their position within the merophyte. (D) This is a cross-section of the root showing the derivatives of the three merophytes that form the root circumference. (E) This diagram of the cross-section in (D) shows the boundaries of the three merophytes. (A from Hardham and Gunning 1979. A, B, and D courtesy of A. Hardham.)

The cells that will become the root body are generated by divisions parallel to the three internal triangular faces of the apical cell, forming a wedge-shaped cell known as a merophyte. Each of the three derivative cells subsequently divides a set number of times to form a sector that makes up one-third of the root axis. The planes and numbers of divisions of the apical cell and each of its derivatives are very precise. We can recognize two different kinds of divisions—formative and proliferative—which differ in the fate of the daughter cells produced. Both daughter cells resulting from a proliferative division have the same fate.