Plant cells perceive their position within a tissue and assume the polarity appropriate for that tissue. In addition, cells can perceive and act on information coming from their environment to alter their polarity and redirect growth when necessary. Cellular polarity must be established to orient subsequent expansion. Cells that are initially apolar, such as zygotes, spores, and pollen grains, later become polarized and initiate tip growth and have been especially valuable in the analysis of the induction and establishment of polarity.

A wide variety of external gradients, including temperature, light intensity, pH, ions, and electric-potential gradients, can polarize and orient the axis of growth of these cells. Thus, polarity can be experimentally manipulated without the complexities associated with multicellular tissues. Much of our understanding of the establishment of polarity in tip-growing cells is derived from studies of rhizoid emergence in zygotes of the brown alga Fucus.

Polarity of the Fucus Zygote is Initially Unstable but Later Fixed

Unlike higher plants, and even unlike most other algae, certain brown algae, particularly Fucus and Pelvetia, shed their eggs and sperm into the sea, where fertilization occurs. The zygote initially lacks a cell wall and is completely apolar. However, a polar axis is established within a few hours of fertilization in response to unilateral light. The axis is not stable at first and can be changed many times simply by a change in the direction of the light.

The polar axis becomes fixed within 10 to 14 hours after fertilization, after which it cannot be altered by a change in the direction of the light, and a structure that will become the rhizoid begins to protrude from the darkened side.

Even though the zygote is still a single cell, it is polarized, with two structurally different poles, the thallus and rhizoid poles, which have radically different fates. The first zygotic division is asymmetric and occurs at right angles to the polar axis. It establishes two cells, each having the identity of the pole from which it emerges. The smaller rhizoid cell produces a filament of cells and the holdfast that attaches the plant to rocks. The larger thallus cell divides to produce a globular mass of cells, from which the main body of the plant, the thallus, forms (Quatrano and Shaw 1997).

A dye known as fluorescent dihydropyridine (FL-DHP), which binds to calcium channels in mammalian cells and can interfere with calcium uptake, has been used as a probe to examine the polarization of the Fucus zygote cell membrane. During the first 6 to 8 hours after fertilization, and in response to unilateral light, FL-DHP receptors, presumably calcium channels, are redistributed and become localized on the dark side of the Fucus zygote at what will become the rhizoid pole. If the direction of the light is changed, the location of the FL-DHP–binding proteins also changes, again becoming concentrated on the dark side of the zygote (Shaw and Quatrano 1996).

One of the earliest events in the establishment of polarity after exposure of the zygotes to unilateral light is the induction of a positive current that flows into the cell on the shaded side and loops back through the external medium (Web Figure 17.3.A). This transcellular current, which is due largely to calcium ions, is on the order of 100 pA (1 picoampere = 10–12 ampere) and develops in advance of any morphological sign of polarity.

Web Figure 17.3.A   A summary of the events involved in the establishment of polarity in zygotes of the brown alga Fucus. (A) The zygote is polarized by an asymmetric stimulus from the environment, such as unilateral light. (B) A current flows (charged calcium ions move) through the polarized but still spherical zygote at the site at which the rhizoid will emerge, driven by Ca2+ uptake in the shaded half of the cell, from which the rhizoid will emerge. The current (Ca2+) flows out on the opposite side. (C) Cell polarity becomes fixed when actin microfilaments assemble at the site of rhizoid emergence and a cell wall is assembled around the zygote. The cell wall completely surrounds the zygote, but its composition differs in the rhizoid and thallus halves. Vesicles containing sulfated polysaccharides are transported by actin filaments to the plasma membrane and deposited in the cell wall only at the site of rhizoid emergence. (D) Finally, the zygote divides, and the rhizoid cell grows at its tip.

The relevance of this phenomenon to the establishment of cell polarity is indicated by the fact that the site at which positive charge flows into the cell is also the site of subsequent rhizoid outgrowth. Transcellular ionic currents also have been observed in some tip-growing cells of higher plants, including root hairs and germinating pollen grains, but they have not yet been detected in plant cells that expand by diffuse growth (Jaffe and Nuccitelli 1977).

The ionic current in polarizing Fucus zygotes likely arises from the redistribution of ion channels in the plasma membrane. This current generates an electric-potential difference across the membrane that could alter other membrane properties, such as the distribution of membrane proteins. The current also alters the ionic composition of the cytosol; the magnitude of the effect depends on the ions that form the current, which vary in different cell types. Because the Ca2+ concentration in the cytosol is usually very low (between 10–6 and 10–8 µM), even a small increase in intracellular Ca2+ concentration could have a marked effect.

Changes in Cytosolic Calcium Have Been Measured

The fluorescent calcium-indicator dye fura-2 has been used to detect intracellular cytosolic calcium gradients in both plant and animal cells. Since the excitation spectrum of fura-2 shifts when it binds calcium, we can determine the intracellular concentrations of both forms of the dye (with and without bound calcium) by exciting them with the appropriate two wavelengths. The ratio of the two emissions provides a measure of the calcium concentration that is independent of the dye concentration. Using this technique to measure the cytosolic Ca2+ gradient in growing Fucus rhizoids, researchers observed a gradient from 450 nM at the tip to 100 nM at the base (Brownlee and Pulsford 1988).

This calcium ion gradient may be important for the polarized assembly of actin filaments and vectoral discharge of Golgi-derived vesicles at the rhizoid pole. Calcium ion gradients also have been shown to be established in other tip-growing cells, such as germinating pollen grains, where the direction of growth and the region in which Golgi vesicles carrying cell wall components are deposited are predicted by the calcium gradient (Web Figure 17.3.B). 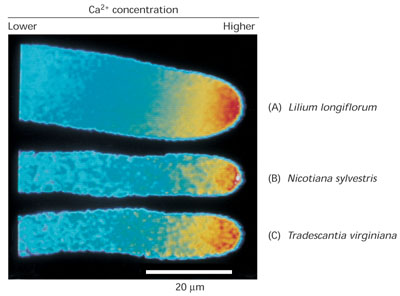 Web Figure 17.3.B   Tip-growing pollen tubes exhibit a steep intracellular gradient of calcium ion concentration, with the highest levels at the growing tip. Pollen tubes from three species of plants were microinjected with a fluorescent calcium indicator dye to demonstrate this Ca2+ gradient, ranging from about 1 µM at the extreme tip to about 0.2 µM at the base. (Photo from Hepler 1997, courtesy of P. Hepler.)

Inhibition of protein synthesis by treatment with the drug cycloheximide delays rhizoid formation but does not stop the establishment of polarity. This result suggests that although rhizoid formation requires the synthesis of new proteins, the establishment of polarity does not, so polarity development must involve a redistribution of existing components. Actin filaments become preferentially localized in the rhizoid half of the zygote and extend from the vicinity of the nucleus to the plasma membrane at the site marked by localized FL-DHP–binding proteins as polarity develops (Kropf 1994; 1997).

Actin filaments are dynamic, and their assembly from a pool of monomeric actin subunits is highly regulated. Actin filaments are localized in the rhizoid half of the cell presumably in response to a change in the assembly or disassembly dynamics, and this localization involves a redistribution of the cellular actin.

The fixation of polarity can be blocked by cytochalasin B, a drug that destroys actin filaments. Treatment with cytochalasin B also disrupts the ionic current that develops during polarization (Brawley and Robinson 1985). Actin filaments participate in cell secretion by transporting secretory vesicles to the plasma membrane in many types of cells.

Secretion of Golgi-Derived Vesicles Is Localized

Cytoplasmic organelles become asymmetrically distributed before the polarity of the cell is fixed (Web Figure 17.3.C). Golgi-derived vesicles accumulate at the site of the future outgrowth in the rhizoid half of the Fucus zygote as polarization is induced by light (Quatrano 1978). For several hours after the induction of polarity, the asymmetric distribution of vesicles can be changed by subsequent treatment with light from a different direction. 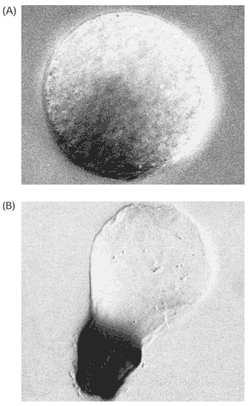 Web Figure 17.3.C   Cytoplasmic vesicles that contain specific cell wall components become asymmetrically distributed early in the development of Fucus zygote polarity. (A) A toluidine blue stained Fucus zygote before fixation of the polar axis. The toluidine blue dye stains a wall component in vesicles or in walls. (B) The embryo after establishment of rhizoid–thallus polarity, with toluidine blue staining confined to the cell wall in the rhizoid portion of the embryo. (From Quatrano and Shaw 1997, courtesy of R. S. Quatrano.)

During this phase when changes are possible, cytoplasmic vesicles accumulate at the prospective site of rhizoid formation on the shaded side of the cell. Subsequently, the vesicles fuse with the plasma membrane, secreting their contents into the cell wall, leading to rhizoid emergence. Evidence suggests that calcium gradients play a role in triggering vesicle discharge at the pole (Derksen et al. 1995).

The fixation of light-induced polarity in Fucus zygotes also requires the presence of the cell wall. Removal of the wall with cell wall–digesting enzymes does not prevent the induction of polarity by unilateral light, but it does prevent fixation of the axis. The orientation of the embryonic axis remains unstable until a new cell wall is synthesized (Kropf et al. 1988).

From these observations it is possible to envisage a chain of events that might occur during the establishment of cell polarity in tip-growing cells.