HIRs, such as the inhibition of stem or hypocotyl growth, have usually been studied in dark-grown, etiolated seedlings. The HIR action spectrum for the inihibition of hypocotyl elongation in dark-grown lettuce seedlings is shown in Web Figure 16.2.A. Note that the main peak of activity is in the far-red rather than the red region of the spectrum, and there are peaks in the blue and UV-A regions as well. Because the absence of a peak in the red is unusual for a phytochome-mediated response, at first researchers believed that another pigment might be involved. In the late 1960s, Karl M. Hartmann in Freiburg, Germany proposed a model to explain the apparent discrepancy. Taking a cue from the enhancement effect of photosynthesis that was discovered by R. Emerson and coworkers (see textbook Chapter 7), Hartmann speculated that the HIR might be the result of an interaction between the Pr and Pfr forms of phytochrome.

To probe such an interaction, Hartmann irradiated plants with not one but two wavelengths of light simultaneously, using two wavelengths that were inactive in the HIR for lettuce hypocotyl inhibition: 658 nm and 768 nm (Web Figure 16.2.A). Although physiologically inactive, the two wavelengths are still photochemically active in driving phytochrome conversions, each in the opposite direction. By carefully varying the irradiances of each wavelength, Hartmann was able to induce a range of ratios of Pfr to total phytochrome in the plant from near zero to higher values. He was able to show that the optimum ratio of Pfr to total phytochrome for the inhibition of lettuce hypocotyl growth is approximately 0.03. Remarkably, this is precisely the ratio that results when the plants are irradiated with a single wavelength at 720 nm, the far-red peak of the HIR. 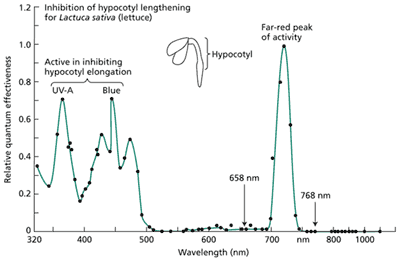