Topic 16.1 Mougeotia: A Chloroplast with a Twist

Topic 16.1 Mougeotia: A Chloroplast with a Twist

Mougeotia is a filamentous green alga whose cells contain a single ribbonlike chloroplast nestled between two large vacuoles and surrounded by a layer of cytoplasm (Web Figure 16.1.A). The chloroplast can rotate about its long axis (Web Figure 16.1.B) and can respond to light by orienting perpendicularly to the direction of light. The perpendicular orientation is referred to as "face position." 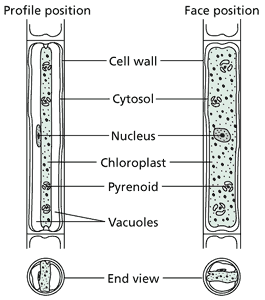 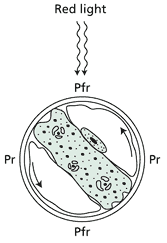 Phytochrome is implicated in the Mougeotia chloroplast rotation response because the system is most sensitive to red light and because the red light effect can be reversed by far-red light. Using microbeams of red and far-red light, Wolfgang Haupt and his coworkers in Germany showed that in Mougeotia, phytochrome is localized near the periphery of the cytoplasm in the vicinity of the plasma membrane. When a microbeam of red light was directed at the cell surface under a microscope, the edge of the chloroplast adjacent to the microbeam rotated 90°, even though the chloroplast itself was not illuminated. 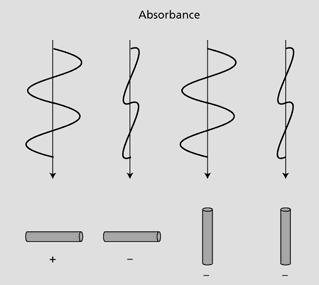 Haupt and his coworkers discovered that the ability of plane-polarized red light to cause chloroplast rotation depends on the plane of polarization relative to the long axis of the cell. This phenomenon is depicted in the experiment shown in Web Figure 16.1.D. Half of a cell was illuminated over the entire surface with polarized red light (R) vibrating perpendicular to the cell axis; the other half was illuminated with light vibrating parallel to the cell axis. 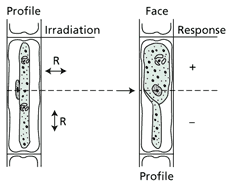 The chloroplast rotated from the profile to the face position only in response to red light vibrating in the perpendicular direction, producing a twist in the chloroplast. On the basis of these experiments, it was concluded that phytochrome molecules have a defined orientation (Haupt 1982).

Two additional experiments demonstrated that the phytochrome orientation changes during the conversion from Pr to Pfr (Kraml 1994). In the first experiment, shown on the left side of Web Figure 16.1.E, the cytoplasmic layer was irradiated with a microbeam of plane-polarized red light vibrating either parallel (upper light treatment) or perpendicular (lower light treatment) to the cell’s long axis. In apparent contradiction to the results shown in Web Figure 16.1.D, the chloroplast rotated only when the red light was vibrating parallel to the cell’s long axis. 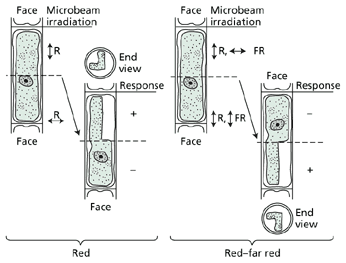 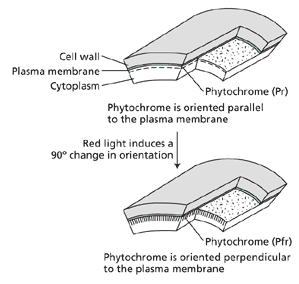 A Model for Chloroplast Rotation

Finally, what is the mechanism of chloroplast rotation in Mougeotia? The effects already described are best accounted for by a model in which phytochrome is located either on the plasma membrane of Mougeotia or on the microtubules that form a cylindrical scaffold directly beneath the membrane. It is difficult to imagine how Pr and Pfr could maintain their respective orientation without being associated either with the membrane or with the cylinder of microtubules.

The nucleotide sequence that codes for Mougeotia phytochrome, consistent with those of other known phytochromes, suggests that the phytochrome is not an integral membrane protein, because it lacks hydrophobic transmembrane domains. On the other hand, the amino acid sequence at the carboxy-terminal end is similar to that of proteins that bind microtubules (Winands and Wagner 1996). So the evidence suggests that phytochrome is bound to the cytoskeleton adjacent to the plasma membrane.

During rotation, the chloroplast moves away from a localized region of Pfr and toward a region of Pr (see Web Figure 16.1.B). Mougeotia chloroplasts move in response to unilateral light as a result of gradients of the active form of phytochrome, Pfr, that form an alternating pigment pattern around the periphery of the cell cylinder, as Web Figure 16.1.B shows. The gradients of Pfr are rapidly translated into gradients of actin–myosin microfilament interactions, which generate the motive force for chloroplast rotation (Wagner 1996).

The primary mechanism of Pfr action remains obscure. Calcium ions from internal stores and calcium-activated calmodulin are known to participate in the response by interacting with the scaffold of microtubules, but the precise relationship between phytochrome and calcium is not yet understood. Studies using drugs that inhibit microtube and microfilament action do not support a role for microtubules in the mechanism of chloroplast movement. However, experiments with Cytochalasin B do indicate that microfilaments are involved.