Topic 14.3 The Mechanical Properties of Cell Walls: Studies with Nitella

Topic 14.3 The Mechanical Properties of Cell Walls: Studies with Nitella

The small size of typical plant cells (20 to 100 µm) has been a serious impediment to the study of cell wall mechanical properties. To measure the extensibility of isolated cell walls from higher plants, researchers must place entire frozen and thawed organs or tissues in an extensometer, as illustrated in textbook Figures 14.18 and 14.19. Although such measurements can give qualitative answers, the extensions measured cannot be related to the growth of living cells in a quantitative way, because the applied stress is uniaxial (unidirectional), whereas the in vivo stress due to turgor pressure is multiaxial (multidirectional).

The giant internodal cells of the freshwater green algae Nitella and Chara have figured prominently in classic studies on ion transport, water permeability, and cytoplasmic streaming (Hope and Walker 1975). These algae are characterized by erect, branched coenocytic (multinucleate) filaments, differentiated into nodes and internodes, each node bearing a whorl of specialized lateral internodes (Web Figure 14.3.A). 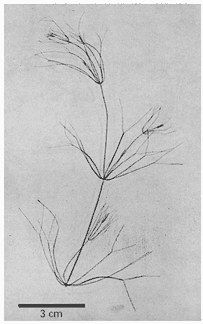 The internode cell begins as a shortened disc 20 mm long, which elongates to produce a slender cylinder about 6 cm long and 0.5 mm wide at maturity. The cell expands by diffuse growth in a predominantly longitudinal direction. Because individual internode cells are large, their cell walls can be isolated and the mechanical properties of the walls measured. It is even possible to study the anisotropic (unequal) mechanical properties of individual cell walls by the use of multiaxial stress to mimic the in vivo turgor pressure.

Web Figure 14.3.B shows the experimental setup for studying multiaxial extensibility in Nitella internode cells. Empty cell wall cylinders are glued to a pipette and inflated with mercury under pressure. Liquid mercury is insoluble and therefore inert under these conditions. In response to the multiaxial stress caused by the pressurized mercury, the cell wall cylinder expands, and investigators can monitor the expansion in both length and width by viewing the process through a horizontal microscope (Web Figure 14.3.C) (Metraux et al. 1980). 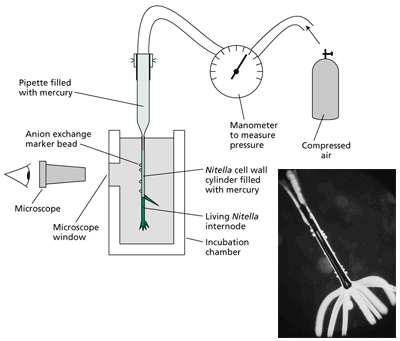 Web Figure 14.3.B   Apparatus for measuring the multiaxial extensibility of Nitella cell walls. The pressure source is a compressed air tank. Air passes through high-pressure tubing into a manometer and from there into a mercury-filled pipette glued to the open end of a Nitella cell wall cylinder. A living internode is maintained at the distal end. The wall is immersed in a perfusion chamber with a glass window. Displacement of resin beads attached to the surface of the wall is measured with a horizontally oriented microscope. The inset shows a view of a mercury-inflated cell wall cylinder with marker beads attached as seen through the traveling microscope. (Photo from L. Taiz.) 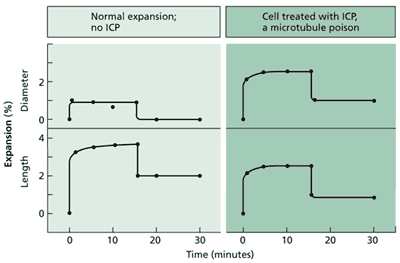 Web Figure 14.3.C   Data from an in vitro multiaxial cell expansion experiment showing expansion in length and diameter expressed as a percentage of the initial value. (After Taiz et al. 1981.)

These results are consistent with the anisotropic growth pattern of the cells. Web Figure 14.3.C also shows the effects of pretreating the cells with the microtubule poison isopropyl N-phenylcarbamate (IPC), which, like colchicine, induces the random deposition of cellulose microfibrils in the wall. The result is that the extensions of the wall in length and diameter are about equal, consistent with the isotropic growth pattern induced by this inhibitor.

Nitella has also proven to be useful for studying cell wall properties in vivo. Many of the concepts applied to contemporary studies on the biophysical control of cell expansion are derived from the pioneering experiments on living Nitella cells by Paul Green and his colleagues at Stanford University (Green 1968). An important insight to come out of such studies is that the inner 25% of the cell wall determines the polarity of cell expansion.

Taking advantage of the fact that cellulose microfibrils are crystalline and therefore exhibit birefringence (double refraction) when viewed with polarized light, Paul Richmond at the University of the Pacific in California devised an optical technique to measure cell expansion in length and diameter, and the orientation of the cellulose microfibril in the cell wall, simultaneously (Richmond 1983). This technique made it possible to determine the relationship between microfibril angle and the direction of cell expansion.

As Web Figure 14.3.D shows, the microfibril angle began to change from transverse to random almost immediately after colchicine was added to the growth medium. However, the anisotropy of growth did not change until about 8 hours later. The transition from anisotropic growth to isotropic growth is complete after a relative increase in cell surface area of about 25%. 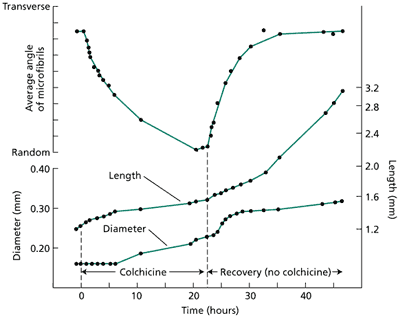 Web Figure 14.3.D   Effect of colchicine addition and removal on cellulose microfibril angle and anisotropic growth of a young Nitella internode. The growth response to colchicine treatment is an increase in the rate of growth in diameter and a decrease in the rate of growth in length. Length and diameter are plotted on log scales; the slopes of the curves express relative growth rates (see textbook Chapter 16). Colchicine was added at time zero, and was removed at 24 hours. Note that the average angle of the cellulose microfibrils starts to become less transverse and more random almost immediately after colchicine is added, and it begins to become more transverse immediately after colchicine is removed. However, growth anisotropy does not change until 8 hours after colchicine addition and takes about 8 hours to recover after colchicine removal. (After Taiz et al. 1981.)

Since wall thickness remains constant during this period because of continued wall synthesis, we can infer that the directionality of cell expansion changes when the inner 25% of the cell wall has been replaced. Thus the inner 25% of the cell wall appears to represent the load-bearing portion of the wall. By implication, the outer 75% has become too weakened by stretching to restrict cell expansion.