For branched polysaccharides, the backbone of the polysaccharide is usually given by the last part of the name. Thus, xyloglucan has a glucan backbone (a linear chain of glucose residues) with xylose sugars attached to it in the side chains; arabinoxylan has a xylan backbone (made up of xylose subunits) with arabinose side chains. However, a compound name does not necessarily imply a branched structure. For example, "glucomannan" is the name given to a polymer containing both glucose and mannose in its backbone. Because sugars may assume multiple forms and may be connected in many ways, the nomenclature for sugars is not simple and is briefly summarized here.

Monosaccharides (single-sugar residues) are polyhydroxyl aldehydes or ketones with the empirical formula (CH2O)n . They typically contain one asymmetric carbon, so they can exist as two stereoisomers, designated as the D or L enantiomers (Web Figure 14.1.A). 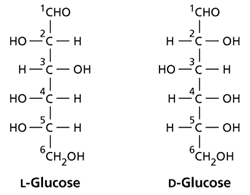 Web Figure 14.1.A   D- and L-glucose shown in the linear form. The carbons are numbered from the end with the aldehyde (CHO) (C = O) group.

Monosaccharides usually form a cyclic, rather than a linear, structure, because the carbonyl oxygen can react with the hydroxyl groups, typically forming either five-member rings (furanose rings) or six-member rings (pyranose rings). These rings have a new chiral center and may take two forms, designated as α or β anomers. Thus, β-D-glucopyranose is D-glucose taking the form of a six-member ring in the β configuration (Web Figure 14.1.B). In solution, monosaccharides freely mutorotate (convert between α or β anomers); when linked in polymers, the anomeric configuration is stable.

The sugars in polysaccharides are linked together by O-glycosidic bonds. We indicate the linkage pattern by specifying the carbon atoms connected by the glycosidic bond. In cellulose, for example, carbon atom 1 is linked to carbon atom 4 in the neighboring glucose residues. Thus, cellulose is designated as a (1→4) β-D-glucan, because it is a string of β-D-glucose molecules linked through carbons 1 and 4 (Web Figure 14.1.C). It may also be called a polymer of (1→4)-linked β-D-glucopyranose.