In oxygen fixation, molecular oxygen is added directly to an organic compound in reactions carried out by enzymes known as oxygenases. Recall from Chapter 8 that oxygen is directly incorporated into an organic compound during photorespiration in a reaction that involves the oxygenase activity of ribulose-1,5-bisphosphate carboxylase oxygenase (rubisco), the enzyme of CO2 fixation (Ogren 1984). The first stable product that contains oxygen originating from molecular oxygen is 2-phosphoglycolate.

Hydroxyproline is an important component of the cell wall protein extensin (see textbook Chapter 14). The synthesis of hydroxyproline from proline differs from the synthesis of all other amino acids in that the reaction occurs after the proline has been incorporated into protein, and it is therefore a posttranslational modification reaction. Prolyl hydroxylase is localized in the endoplasmic reticulum, suggesting that most proteins containing hydroxyproline are found in the secretory pathway.

Monooxygenases add one of the atoms in molecular oxygen to a carbon compound; the other oxygen atom is converted into water. Monooxygenases are sometimes referred to as mixed-function oxidases because of their ability to catalyze simultaneously both the oxygenation reaction and the oxidase reaction (reduction of oxygen to water). The monooxygenase reaction also requires a reduced substrate (NADH or NADPH) as an electron donor, according to the following equation:

where A represents an organic compound and B represents the electron donor.

An important monooxygenase in plants is the family of heme proteins collectively called cytochrome P450, which catalyzes the hydroxylation of cinnamic acid to p-coumaric acid (see Web Figure 13.4.A, bottom). In monooxygenases, the oxygen is first activated by being combined with the iron atom of the heme group; NADPH serves as the electron donor. The mixed-function oxidase system is localized on the endoplasmic reticulum and is capable of oxidizing a variety of substrates, including mono- and diterpenes and fatty acids. 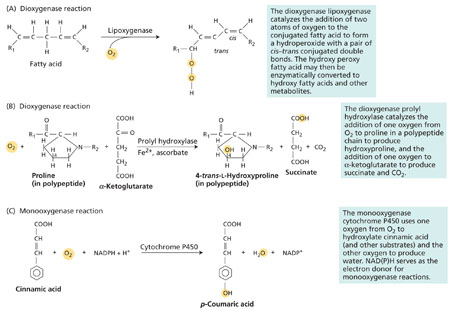 Web Figure 13.4.A   Examples of the two types of oxygenase reactions in cells of higher plants, dioxygenase (A and B) and monooxygenase (C).