Topic 13.1 Development of a Root Nodule

Topic 13.1 Development of a Root Nodule

The establishment of symbiosis between legumes and rhizobia involves the activation of genes in both the host and the symbiont (Geurts and Bisseling 2002) and an elaborated exchange of signals (see textbook Chapter 13). The formation of a root nodule, the specialized organ from a plant host that contains the symbiotic nitrogen-fixing rhizobia (see textbook Figure 13.9), involves two simultaneous processes: infection and nodule organogenesis. The different stages in the initiation and development of a root nodule are shown in Web Figure 13.1.A. A detailed description of the infection process is shown in textbook Figure 13.12. 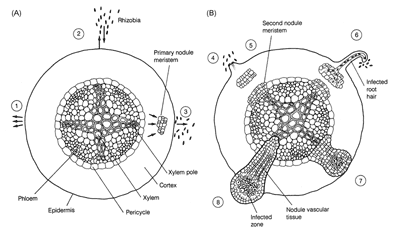 Web Figure 13.1.A   Stages in the initiation and development of a soybean root nodule. (A) Events involved in the initiation of the nodule: (1) the root excretes substances; (2) these substances attract rhizobia and stimulate them to produce cell-division factors; (3) cells in the root cortex divide to form the primary nodule meristem. (B) Stages of infection and nodule formation: (4) bacteria attach to the root hair; (5) cells in the pericycle near the xylem poles are stimulated to divide; (6) the infection thread forms and extends inward as the primary nodule meristem and the pericylce continue to divide; (7) the two masses of dividing cells fuse into a single clump while the infection thread continues to grow; (8) the nodule elongates and differentiates, including the vascular connection to the root stele. Bacteroids are released into the cells in the center.

A recent study of the early infection stages and nodule development in two Medicago species and the symbiont, Rhisobium meliloti showed that extensive reorganization of microtubules occurred early in the infection process in the pericycle and the inner cortex where the nodule primordium forms (Timmers et al. 1999). The changes in microtubule organization were observed by immunolocalization, and fluorescence and laser confocal microscopy (Web Figure 13.1.B). 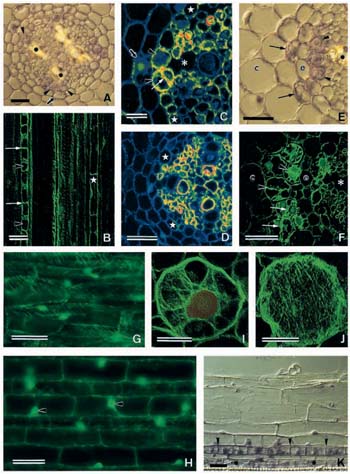 These findings show that upon infection, the pericycle is activated first, followed by the activation of the inner cortex, where the nodule primordium forms. These changes are followed by a major reorganization of the microtubular cytoskeleton network in outer tissues, associated with root hair activation and curling, the formation of pre-infection threads, and the initiation and the growth of an infection network.