The genetic systems in mitochondria and plastids differ both structurally and functionally from the nuclear genome and its gene expression. Instead, mitochondria and plastids share several genetic features with bacteria. For example, several genes are transcribed together and the ribosomes are of a prokaryotic type. This is in line with the evolutionary origin of the mitochondrion as an endosymbiont of the alpha-subclass of Proteobacteria, a group including the intracellular pathogen Rickettsia prowazekii (Gray et al. 1999).

The Plant Mitochondrial Genome and Its Expression

Plants are distinctly different from other eukaryotes regarding their mitochondrial DNA (mtDNA) and its expression. For example, the mtDNA in plants is very large and highly variable in size between species (Backert et al. 1997). The mitochondrial genome in plants is normally depicted as a circular molecule (Web Figure 12.6.A). However, in mitochondria from various sources, a mix of differently structured DNA molecules is often observed. These include linear repetitions of the "master" unit and branched structures, whose function, distribution upon cell division, and inheritance is not fully understood (Bendich 2007; Kubo and Newton 2008). The presence of several repeats enables the genome to recombine, changing the gene order or even causing a split into smaller subgenomic molecules, each carrying a subset of the genes. An example of how this can take place is given in Web Figure 12.6.A. Though the size of mtDNA varies between plants, the number of genes appears to be similar in all plants. In the 367-kilobase-pair (kb) mtDNA of Arabidopsis thaliana (Unseld et al. 1997; Marienfeld et al. 1999), the known genes (constituting 65 kb) are scattered in a background of noncoding sequence. A similar situation can be found in the sequenced mtDNA of other plant species, such as sugarbeet (Kubo et al. 2000). Plant mtDNA is very different from the much smaller (16 kb) single mtDNA molecule of mammals, in which every base pair has a function in coding for protein or controlling transcription and replication, and neither introns nor repeats exist. 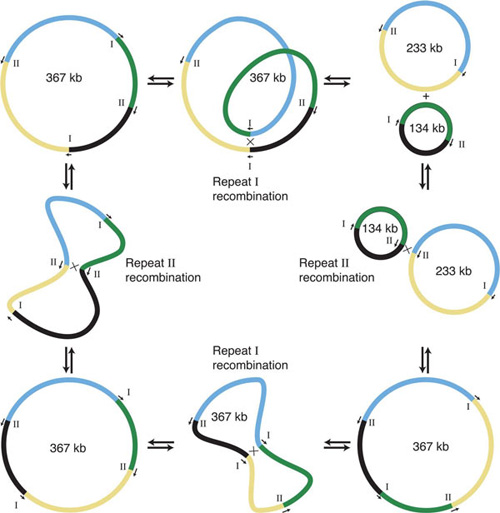 Web Figure 12.6.A Recombination in mtDNA of Arabidopsis thaliana. The mtDNA contains a direct repeat (I) and an inverted repeat (II). Recombination at the two repeats will change the gene order and/or split up the genome into two separate molecules. (After Unseld et al. 1997.)

The expression of the mitochondrial genes in plants is carried out by RNA polymerases that are unlike the nuclear RNA polymerases, but related to the enzymes in bacteriophages. For several mitochondrial genes, these phage-type polymerases initiate transcription from multiple promoters (Kühn et al. 2005). Many genes in plant mtDNA are broken up into exons by introns. The introns are removed in the processing of the primary RNA into a mature mRNA that can be translated into the correct polypeptide (Web Figure 12.6.B). The introns in mitochondria belong to the so-called self-splicing type II group, in which splicing is defined by the intron structure. The splicing can also work in the trans mode—joining segments from separate RNA molecules—and thus assemble protein-coding reading frames from exons on different primary transcripts. This allows individual exons of a gene to reside independently in the genome, even in different subgenomic DNA molecules. Because mitochondrial genes are often co-transcribed with unrelated genes into a polycistronic primary transcript, RNA processing also includes endonucleolytic reactions, so that each mature mRNA encodes only one protein (see Web Figure 12.6.B). Mitochondrial mRNAs can be polyadenylated, just like mRNA for nuclear-encoded proteins. However, instead of stabilizing the mRNA, which is the case for mRNAs from nuclear genes, polyadenylation of mitochondrial mRNA mediates degradation. Mitochondrial mRNA ends are specified and stabilized by stem-loops and RNA-binding proteins (Gagliardi and Leaver 1999; Kuhn et al. 2001; Hauler et al. 2013). 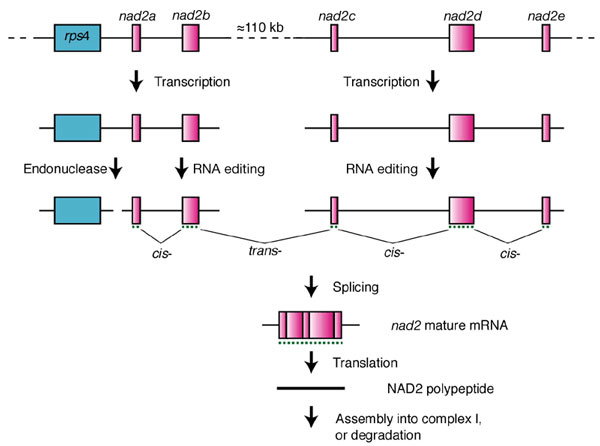 Web Figure 12.6.B Mitochondrial gene expression. The mitochondrial nad2 gene in Arabidopsis thaliana encodes the NAD2 subunit of respiratory complex I. The figure shows the RNA processing steps needed for this gene to be expressed into an mRNA that will produce the correct polypeptide. Exons a and b are cotranscribed with a gene for a ribosomal protein (rps4), so an endonuclease must cut the RNA. The fate of the rps4 RNA has been omitted in the figure. The nad2 exons must be joined from two separate primary transcripts by both cis- and trans-splicing. In this gene, editing of the sequence at the RNA level changes 31 bases (symbolized by green dots) exclusively in the exons. For clarity, the different RNA maturation processes are depicted here as consecutive events, whereas in vivo they appear to take place in an unordered sequence or simultaneously. (After Lippok et al. 1996 and Unseld et al. 1997.)

In plant mitochondria, an additional RNA processing event takes place—RNA editing (Covello and Gray 1989; Gualberto et al. 1989; Hiesel et al. 1989). In this process, certain cytidines (C) are deaminated into uridines (U). Rarely, U is aminated to C instead. This means that the coding sequence is changed at the RNA level, which restores the correct information for translation of functional proteins where the DNA sequence has diverged. Editing sites mainly occur in DNA specifying protein sequences and functional RNA, and are rare in other positions in the mtDNA. In principle, the greater the importance of an individual base, the higher the probability that it constitutes an editing site. Mitochondrial RNA editing has been found in land plants, but not in algae. It also occurs, though to a lesser extent, in plastids (Marchfelder et al. 1998). Despite the considerable number of bases that can be edited (up to 15% of the bases of a gene), the functional relevance of this process and the consequent divergence in mtDNA sequence is not understood. It has been hypothesized that the editing from C to U could have led to a lower DNA sensitivity to UV radiation, to which land plants would be more exposed than algae, but the evidence is weak—instead, RNA editing may be the consequence of a randomly occurring functional change that, once established, became essential for survival (Binder and Brennicke 2002; Fujii and Small 2011).

Organellar RNA processing in plants has in a number of cases been shown to involve a special class of nuclear-encoded proteins, the pentatricopeptide repeat (PPR) proteins (Schmitz-Linneweber and Small 2008, Fujii and Small 2011). Some of these proteins serve as specificity factors for editing and splicing by binding to RNA containing specific sequence motifs. The editing sites in plant mtDNA are of many types, which would be expected to require many different PPR proteins. Consistent with this and in contrast to algae, animals, fungi, and protists, which contain few PPR genes (<30), seed plants contain about 500 PPR genes! This makes PPR proteins one of the major gene families in plants.

Mitochondrial Genes Have Been Transferred to the Nuclear Genome during Evolution

The mitochondrial genome encodes only a small proportion of the mitochondrial proteins; less than 40 as compared to up to thousands of nuclear-encoded mitochondrial proteins (Emanuelsson et al. 2000). Through evolution, genes have been transferred from the mitochondrion, or its proteobacterial progenitor, to the nucleus. This is a process that still takes place, at least in plants. For example, subunit 2 of cytochrome oxidase is encoded by the mitochondrial genome in all investigated eukaryotes except for some legumes and protists. Within the legume family, several intermediates of the gene transfer have been found. For example, a functional gene can be found in the mitochondrial genome and an unexpressed one in the nuclear genome, or vice versa (Adams et al. 1999). In order for a mitochondrial gene to be successfully transferred to the nucleus, the protein-coding frame must be integrated into the chromosome, and several other modifications must be made (Web Figure 12.6.C). For example: (1) a promoter for nuclear transcription must be inserted at the beginning of the gene, (2) the mRNA should acquire signal sequences specifying the nuclear addition of a poly-A tail, and (3) a targeting sequence is necessary for the cytosolically synthesized protein to be imported into the mitochondrion. For proper function, elements regulating the expression in different cell types and under different conditions must also be introduced into the promoter. 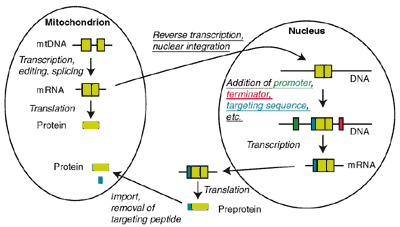 Because the coding sequence for most mitochondrial genes in plants is edited at the RNA level, the mitochondrial genomic sequence will not code for a functional protein if inserted into the nucleus. Therefore, the DNA that is integrated into the nuclear genome must in most cases be made by reverse transcription from mitochondrial mRNA. Upon sequencing the nuclear genome of Arabidopsis thaliana, a copy of most of the mtDNA was found integrated into a nuclear chromosome (Lin et al. 1999), indicating that large segments of DNA can move between cellular compartments. However, these mitochondrial genes transferred to the nuclear genome cannot produce functional proteins unless bases corresponding to editing sites are corrected by mutation. This is highly unlikely to take place before other mutations have further disrupted the sequence. Unlike other eukaryotic mitochondria, plant mitochondria utilize the universal genetic code. Thus, this factor would not be expected to prevent or delay the transfer of genes between plant organelles as it would in other eukaryotes.

A physiological feature directly linked to the plant mitochondrial genome is a phenomenon known as cytoplasmic male sterility, or cms. Plant lines that display cytoplasmic male sterility do not form viable pollen—hence the designation male sterility. The term cytoplasmic refers to the fact that this trait is transmitted in a non-Mendelian fashion; the cms genotype is always maternally inherited along with the mitochondrial genome. Because a stable male sterile line can facilitate the production of hybrid seed stock, cms is an important trait in plant breeding. For this use, cms traits that produce no major effects throughout the plant’s life cycle, except for male sterility, have been found for many species.

Plants carrying the cms trait have distinct rearrangements in their mtDNA relative to wild-type plants. These rearrangements create novel translated reading frames and have been strongly correlated with cms phenotypes in various systems. Nuclear restorer genes can overcome the effects of the mtDNA rearrangements and restore fertility to plants with the cms genotype. Such restorer genes are essential for the commercial utilization of cms if seeds are the harvested product.

An interesting consequence of the use of the cms gene occurred in the late 1960s, at which time 85% of the hybrid feed corn grown in the United States was derived from a cms line of maize (Zea mays) called cms-T (Texas). In cms-T maize, the mtDNA rearrangements give rise to a unique 13 kDa protein, URF13 (Levings and Siedow 1992). How the URF13 protein acts to bring about male sterility is not known. In the late 1960s, a disease appeared, caused by a race of the fungus Bipolaris maydis (also called Cochliobolus heterostrophus). This specific race synthesizes a compound (HmT-toxin) that specifically interacts with the URF13 protein to produce pores in the inner mitochondrial membrane, with the result that selective permeability is lost.

The interaction between HmT-toxin and URF13 made Bipolaris maydis race T a particularly virulent pathogen of cms-T maize and led to an epidemic in the corn-growing regions of the United States that was known as Southern Corn Leaf Blight. As a result of this epidemic, the use of cms-T in the production of hybrid maize was discontinued. Alternative, toxin-resistant cms traits are now in use, but some hybrid corn production is still done by mechanical detasseling to prevent self-pollination.

As compared with other organs, the number of mitochondria per cell and the expression of respiratory proteins are very high in developing anthers, where the energy-demanding process of pollen development occurs (Huang et al. 1994). Apart from the specific cms traits described above, male sterility is also a common phenotype of mutant plants lacking subunits of the complexes of oxidative phosphorylation (Rhoads and Subbaiah 2007). Such mutants can be viable because of the existence of the alternative, nonphosphorylating respiratory pathways, but generally display functional defects in vegetative growth.