The electron transport chain (ETC) in the inner mitochondrial membrane of most eukaryotes consists of four complexes, complex I to complex IV. Complexes I, III, and IV pump protons across the inner mitochondrial membrane when transporting electrons. For each electron pair (corresponding to one NADH or one oxygen atom), four protons are pumped by complex I, four by complex III, and two by complex IV. The detailed three-dimensional structures have been determined for the mammalian complexes III and IV and to some extent for complex I. The structural information has improved the understanding of the electron paths in the complexes (Brandt 2006, Hosler et al. 2006, Klodmann et al. 2010, Efremov and Sazanov 2011).

Ubiquinone (Q), also called coenzyme Q, is a mobile electron and proton carrier in the inner mitochondrial membrane, structurally and functionally similar to plastoquinone in the thylakoid membrane of plastids (Web Figure 12.2.A). The ability of Q to carry both electrons and protons—and to accept and donate them step-wise—is utilized in electron transport and proton pumping (Web Figure 12.2.B) (Nicholls and Ferguson 2002). To be reduced, Q can receive two electrons from complex I or succinate dehydrogenase (but also, for example, from the type II internal NADH dehydrogenase; see Web Topic 12.3) and take up two protons (2 H+) from the matrix, forming QH2. However, at the oxidizing site (complex III), there is actually both oxidation and reduction taking place. A QH2 will be oxidized to Q at the outer Q-site, releasing two electrons. One of these electrons goes to cytochrome c, whereas the other is recycled to reduce an oxidized Q in the inner Q-binding site by one step to produce a semiquinone. The next time a QH2 is oxidized at the outer Q-binding site, the semiquinone in the inner Q-site will receive a second electron, becoming a QH2. So, from two QH2, we have made one Q and one QH2, which again can be oxidized. In each cycle (i.e., for each electron passing to cytochrome c), two protons are taken up from the matrix and two protons released to the intermembrane space. So, the Q Cycle mediates the pumping of an extra proton per electron transported, increasing energy conservation.

Web Figure 12.2.A The structure of Q and its reduced form, ubiquinol (QH2). A Q can take up two electrons and two protons and become QH2. Alternatively, the reduction can go stepwise, with one electron plus one proton at a time. Stepwise reduction produces a relatively short-lived intermediate, ubisemiquinone. Oxidation of QH2 is the reversal of the process. The Q molecule has a long hydrocarbon tail that anchors it within the membrane, depicted as R in the semiquinone and QH2 structures. 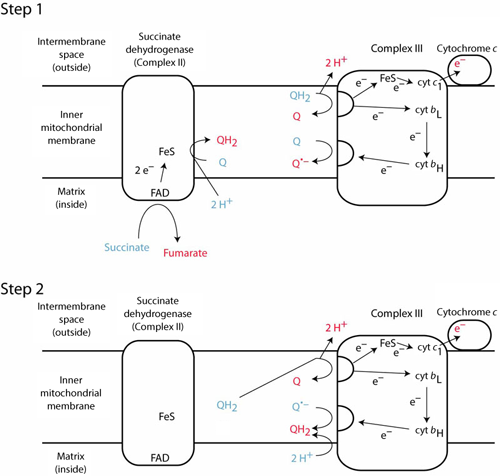 Web Figure 12.2.B Reduction and oxidation of ubiquinone (Q) and the Q Cycle. Complex III and Q together carry out proton pumping. In this picture we have also included Q reduction via succinate dehydrogenase (complex II) so that we can see a more complete process. The process contains two steps. The reactants of each step are depicted in blue, the products are denoted in red, and intermediates are black. The reactant Q molecules of step one, one reduced, and two oxidized, are the same as the products of step two, (i.e., we return to the same situation). In each step, one electron is transported from succinate dehydrogenase to cytochrome c, but two protons from the matrix are transported to the intermembrane space. The electron path in succinate dehydrogenase involves an FAD and several iron-sulfur centers (FeS) bound to the protein. In complex III, QH2 binds to the outer Q-binding site and one electron from goes via the Rieske FeS and cytochrome c1 (bound to the complex) to the mobile carrier cytochrome c. The other electron goes via b-type cytochromes (cytochrome bL and cytochrome bH) to a second, inner Q-binding site, where it is donated to a Q (step 1) or a semiquinone (step 2). Protons (H+) are taken up from the matrix in Step 2. The subscripts L and H stand for "low potential" and "high potential," respectively. The higher the potential, the more readily the molecule accepts electrons. (Modified from Nicholls and Ferguson 2002.)

If we look at the whole reaction from succinate to cytochrome c (see Web Figure 12.2.B), we see that for each succinate, four protons are transported from the matrix to the intermembrane space. However, at the same time, the two electrons are also transported out. So, this corresponds to the net pumping out of two positive charges. Since, energetically, the mitochondrial membrane potential (which determines the energetic cost of transporting a positive charge out) is much larger than the pH gradient (which determines the cost for export of a proton), proton pumping by complex III is less energy-demanding than that by, for example, complex I, which pumps four protons including their charges.

Detailed three-dimensional structures have been determined for the proton-pumping complexes III and IV in animals (Iwata et al. 1998, Tsukihara et al. 1996, Hosler et al. 2006), and now also for complex I (Brandt 2006, Klodmann et al. 2010, Hinchliffe and Sazanov 2005, Efremov et al. 2010, Efremov and Sazanov 2011a, Efremov and Sazanov 2011b). The structural information has improved the understanding of the electron paths of complexes III and IV, but the proton pumping mechanism of the latter is still not fully clarified. The structure of complex III is shown in Web Figure 12.2.C, which displays the exact positions of the redox centers involved in the Q Cycle. 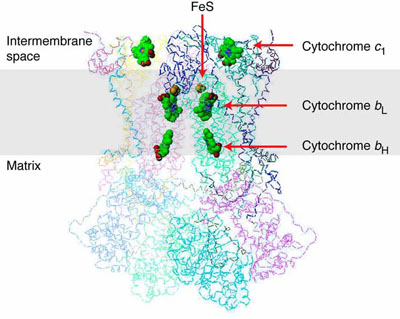 Web Figure 12.2.C Three-dimensional structure of complex III from chicken mitochondria. The protein complex is a dimer located in the inner mitochondrial membrane (denoted as a gray box), but with a major protein part protruding into the matrix. The catalytic centers are present in the parts spanning the inner membrane and facing the intermembrane space, and are denoted for the right part of the dimer. Note the symmetry, with each electron-carrying center occurring twice. The protein backbone is colored according to the different subunits. The image was made using Jmol, with data from PDB entry 3h1h (www.rcsb.org/pdb).