Although it is possible to measure respiration by intact tissues, it is often useful to be able to isolate uncontaminated, intact, and functional mitochondria. Here, we will consider some of the principles for isolating cell organelles. This discussion is not meant to be exhaustive nor will it be a cookbook with recipes to be followed step-by-step. Useful general references are Douce 1985, Møller et al. 1996, and a number of chapters in Volume 148 of Methods in Enzymology from 1987.

Disruption of the Tissue

The aim is to rupture as many of the cells in the tissue as possible in order to release the mitochondria, but without disrupting them. Whereas many mammalian tissues are easy to homogenize, plant tissues are much tougher, mainly because of the cell walls. There are a number of standard homogenizers, including mixers with rotating knives or razor blades, juice extractors, ball mills, and mortar and pestle; the most suitable method for the specific plant material should be chosen. This may involve some initial optimization experiments.

For special applications, cells may be disrupted by completely different methodology. Analyses of metabolites and cofactors in plant cell compartments require isolation of organelles (chloroplasts and mitochondria) on a subsecond timescale. For this purpose protoplasts devoid of cell wall are disrupted and organelles separated by rapid filtration (Lilley et al. 1982).

The medium for homogenizing rat liver contains only an osmoticum and a buffer. Such a medium will not work with plant tissues because of the disruption of the large central vacuole (absent in mammalian cells), which releases its fairly acidic contents often containing phenols and other potentially harmful substances.

Let us consider the components of the optimal homogenization medium for isolating intact and functional organelles from plant material, one by one.

Osmoticum. This component is required to prevent the mitochondria from losing their matrix content because of swelling and bursting. For the isolation of plant mitochondria, there is a tradition of using sucrose or mannitol at 0.2–0.5 M; whereas 0.15 M KCl is standard for the isolation of mammalian mitochondria. In neither case does this mimic precisely the conditions in the cytosol, but it works.

Buffer. The pH in the cytosol of plant cells is around 7.5, and the homogenate should be buffered at pH 7–8. A buffer should therefore be included and a plethora of different buffers are available. Choose an inexpensive one with a pKa of 7–8 (e.g., 4-morpholinopropane sulfonic acid [MOPS]) and be sure to use enough to counterbalance the acidic vacuolar content. The tissue type, the tissue/medium ratio, and the buffer concentration determine whether the acidic vacuolar content is properly neutralized. Obviously, special tissues like lemons or CAM plants harvested late at night or in the early morning require special treatment!

Antioxidants. Antioxidants (reductants) such as ascorbic acid, dithiothreitol, or cysteine are used mainly to protect sulfhydryl groups on proteins against oxidation.

Bovine serum albumin (BSA). This protein from the blood of cows is usually included to protect the mitochondria: BSA binds fatty acids (its function in the blood) released by the action of phospholipases on phospholipids. BSA may also bind phenolics that are released from the vacuole. Both of these groups of compounds can otherwise be troublesome later. In addition, BSA may prevent proteases from degrading mitochondrial proteins by serving as an alternative substrate present at high concentrations.

To remove larger tissue fragments, cell walls, and often starch grains, the homogenate is always filtered, usually through a nylon net with a mesh size of 30–100 μm.

The first step of the purification is usually differential centrifugation. This means that the filtered homogenate is centrifuged first at low speed for a short time (e.g., 3000 g for 5–10 min) and the pellet (containing cell wall fragments, starch grains, nuclei, intact plastids) is discarded. The supernatant is then centrifuged faster and for a longer time (e.g., 10,000 g for 10–20 min) and the pellet (termed crude mitochondria) is collected. It contains intact and damaged mitochondria, as well as peroxisomes and plastid membranes. The supernatant is discarded.

As soon as the mitochondria have been pelleted and thus removed from potentially damaging soluble substances in the homogenate, the medium can be greatly simplified. Usually the so-called wash medium contains only osmoticum and weak buffer (no need for a strong buffer since there is no longer any vacuolar content to neutralize). However, it may be wise to include EDTA to bind divalent cations, as well as BSA to adsorb any fatty acids released by the action of phospholipases. The resuspended crude mitochondria are often diluted to 50–100 ml with wash medium and subjected to another round of slow and fast centrifugation to remove more contaminants.

The aim of the next step is to separate the intact mitochondria from the contaminants. This usually involves a density gradient centrifugation with Percoll either alone (e.g., Struglics et al. 1993) or together with other dense materials (e.g., Day et al. 1985). Percoll (colloidal silica coated with PVP) is inert and osmotically inactive. A further advantage is that a Percoll gradient is self-generating because the Percoll microspheres pellet very slowly during the centrifugation. The crude mitochondria are layered on top of the wash medium containing the appropriate concentration of Percoll (usually 25–30%). If the Percoll concentration and the speed and duration of the centrifugation have been chosen correctly, the intact mitochondria will form a distinct band, well away from the contaminants. This band can be collected, washed free of Percoll by repeated dilution and centrifugation, and either used immediately, or frozen with 5% (v/v) dimethylsulfoxide (to preserve integrity) in liquid nitrogen and stored at –80°C until use. This preparation can be stable for months, retaining the ability to form a proton electrochemical gradient across the inner membrane.

The yield is 1–50 mg mitochondrial protein per 100 g fresh weight, depending on the tissue. This represents only a small fraction of the total amount of mitochondria in the tissue.

If the aim of the experiment is to investigate a specific physiological problem, then the plant material is often well defined. However, in cases where there is flexibility in the choice of material, it is wise to follow certain rules of thumb:

The mitochondrion contains four compartments, each with a unique complement of proteins: the outer membrane (containing around 7% of the protein), the intermembrane space (perhaps 1–2%), the inner membrane (50–60%), and the matrix (30–40%). It is sometimes desirable, for instance when trying to localize a given function within the mitochondrion, to isolate the contents of the mitochondrion compartments; this is usually done (e.g., Agius et al. 2001) as follows (Web Figure 12.1.A): 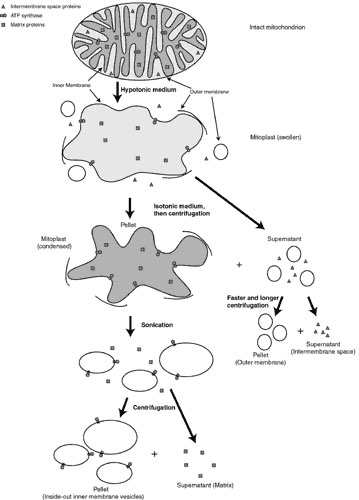 Web Figure 12.1.A  Subfractionation of mitochondrion compartments. The hypotonic medium causes the mitochondria to swell because the matrix takes up water. Since the surface area of the inner membrane (IMM) greatly exceeds that of the outer membrane (OMM), the latter breaks, releasing the contents of the intermembrane space (IMS) together with some OMM. Addition of osmoticum causes the mitoplasts—mitochondria minus (some) OMM—to contract, making them less susceptible to mechanical damage. The mitoplasts can be pelleted and subfractionated into IMM vesicles (submitochondrial particles, or SMP) and matrix by sonication followed by differential centrifugation. When sonication is done in a high-salt medium, the SMP are inside-out—that is, they have the opposite orientation to that of the IMM in intact mitochondria (Møller et al. 1987). The OMM are isolated from the mitoplast supernatant by centrifugation. Intermembrane proteins are found in the OMM supernatant. Symbols: Small squares—matrix protein (e.g., malate dehydrogenase), triangles—intermembrane space protein (no known marker for plant mitochondria), square-and-circle—FoF1-ATPase (ATP synthase) in the inner membrane, with the F1 facing the matrix.

Methods for Establishing Purity, Intactness, and Functionality of the Fractions

It is often important to determine the degree of purity of the mitochondria and their subfractions (Agius et al. 2001).

The intactness of the mitochondria is usually established with enzyme assays that take advantage of the fact that an intact membrane is not permeable to certain molecules. For instance the outer mitochondrial membrane is impermeable to cytochrome c, a 12.5 kDa protein that is too large to pass through the outer membrane pores and therefore cannot cross an intact outer membrane to reach the active site of the enzyme on the outer surface of the inner membrane. However, in the presence of a detergent the total activity of cytochrome c oxidase can be determined. Thus, the percentage of the activity that is latent, that is, hidden by a membrane, can be determined. The latency is used as a measure of outer membrane integrity. Likewise, NADH cannot pass through an intact inner membrane and this property can be used for determining inner membrane integrity.

Functionality is often tested using an oxygen electrode (Web Figure 12.1.B). In experiments on isolated mitochondria, higher rates of electron flow (measured as the rate of oxygen uptake in the presence of a substrate such as succinate) are observed upon addition of ADP (referred to as state 3) than in its absence. ADP provides a substrate that stimulates dissipation of the electrochemical proton gradient through the FoF1-ATPase synthase during ATP synthesis. Once all the ADP has been converted to ATP, the electrochemical proton gradient builds up again and reduces the rate of electron flow (state 4). The ratio of the rates with and without ADP (state 3:state 4) is referred to as the respiratory control ratio. 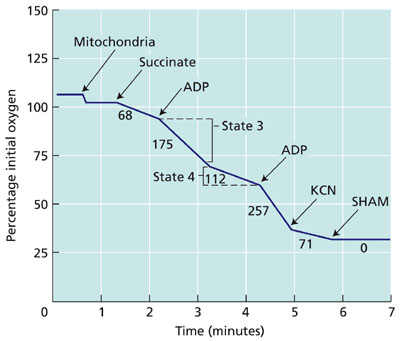 Web Figure 12.1.B  Regulation of respiratory rate by ADP during succinate oxidation in isolated mitochondria from mung bean (Vigna radiata). A limited amount of ADP is normally present in vivo, so the situation is intermediate between state 3 and state 4. The numbers below the traces are the rates of oxygen uptake expressed as O2 consumed (nmol min–1 mg protein–1). (Data courtesy of Steven J. Stegink.)

If the isolated mitochondria show high rates of oxygen consumption, high respiratory control ratios (> 3) and ADP:O ratios close to the theoretical values similar to what is often obtained (see textbook Table 12.1) they are in very good shape. Note that for mitochondria with an appreciable alternative oxidase activity (measured in the presence of the cytochrome oxidase inhibitor KCN), the respiratory control ratio and ADP:O ratio should be measured in the presence of an alternative oxidase inhibitor such as salicylhydroxamic acid or N-propyl gallate (see Web Topic 12.3).

Mitochondrial Activities Can Be Determined In Situ

It is relatively straightforward to measure the activity of enzymes in the soluble matrix fraction isolated from mitochondria (see above). However, this fraction is very dilute compared to the matrix inside intact mitochondria (300–500 mg protein/ml!), and protein–protein interactions may have been lost. When measuring the activity of enzymes in fractions containing membranes—intact mitochondria and submitochondrial particles—a detergent can often be used to remove the permeability barrier that the inner membrane constitutes (e.g., Møller et al. 1996). However, it is also possible to use the ionophore alamethicin to permeabilize the inner membrane to molecules <1000 Da. This procedure makes it possible to measure the activity of matrix and inner membrane enzymes in their native proteinaceous environment (Johansson et al. 2004).

Using alamethicin, it is even possible to measure the activity of cytosolic and mitochondrial enzymes inside intact cells, since the ionophore also permeabilizes the plasma membrane (Matic et al. 2005). This allows measurement on all mitochondria in the cells, not only the ones that are released intact upon cell disruption.