Transport Sugar May Be Hydrolyzed in the Sink Apoplast

In symplastic phloem unloading, transport sugars such as sucrose move through the plasmodesmata to the sink cells. In the sink cells, sucrose can be metabolized in the cytosol or the vacuole before being stored or entering metabolic pathways associated with growth of the tissue. When phloem unloading is apoplastic, however, there is an additional opportunity for metabolic change. The transport sugar can be partly metabolized in the apoplast, or it can cross the apoplast unchanged (Web Figure 11.8.A). For example, sucrose can be hydrolyzed into glucose and fructose in the apoplast by invertase, and glucose and/or fructose would then enter the sink cells. The fact that many monosaccharide transporters have been localized mainly in sink tissues supports the possible existence of this pathway. 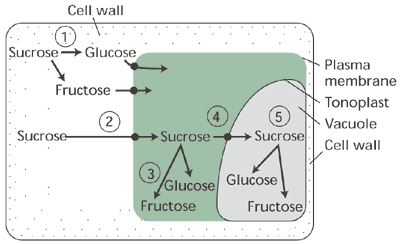 A study with potato plants has shown that apoplastic unloading predominates in elongating stolons (Viola et al. 2001). Stolons are underground lateral shoots that grow from the main stem of the potato plant, characterized by elongated internodes and hooked apical tips, that form tubers at their apices in response to environmental signals. When tuberization started in stolons, phloem unloading shifted from apoplastic to symplastic transport. Histochemical analysis of potato lines transformed with the promoter of an apoplastic invertase gene (invGE) linked to a reporter gene showed invertase activity in the elongating stolon, associated with apoplastic unloading (Web Figure 11.8.B). In the developing tuber, apoplastic loading and invertase activity was observed in a small apical region, which was the apical area of the stolon progressively engulfed by the swelling subapical regions during tuberization. Most of the tuber showed symplastic unloading and lacked expression of the invertase gene.

Web Figure 11.8.B   Expression of an apoplastic invertase (invGE) revealed by GUS staining. (A) GUS staining is restricted to the apical hook region of an elongating stolon (arrow). (B) Developing tuber showing GUS staining associated with the apical bud region (arrow). Bar in (A) = 1 mm; bar in (B) = 500 μm. (From Viola et al. 2001.)

Energy Requirements for Unloading in Developing Seeds and Storage Organs