Early research on phloem loading focused on the apoplastic pathway (see textbook Figure 4.4). Many studies devoted to testing these predictions have provided solid evidence for apoplastic loading in several species. Some of the more important evidence is: 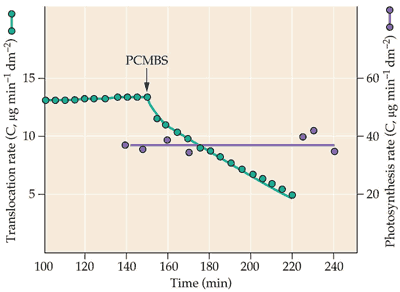 Some Substances Enter the Phloem by Diffusion

As shown in Web Figure 11.7.B, SUC2, one of the major sucrose transporters involved in phloem loading, is found in the companion cells. Mutant Arabidopsis plants containing transferred DNA insertions in the gene encoding SUC2 have been recently identified by reverse genetics (Gottwald et al. 2000). In the homozygous state, these mutations resulted in stunted growth, retarded development, and sterility. The source leaves of mutant plants contained a great excess of starch, and radiolabeled sugar failed to be transported efficiently to roots and inflorescences.

Web Figure 11.7.B   This micrograph shows a single companion cell from broad-leaved plantain (Plantago major) stained with two fluorescent dyes. One of the dyes (green) is (indirectly) linked to an antibody that is specific for the PmSUC2 sucrose–H+ symporter. The second dye (blue) binds to DNA. Since the two dyes are found on a single phloem cell, which is always adjacent to a sieve element, the sucrose symporter is concluded to be located in the companion cell membrane in this species. (From Stadler et al. 1995, courtesy of N. Sauer.) Interestingly, expression of the SUC2 transporter begins in the tip and proceeds to the base in developing leaves during a sink-to-source transition, the same pattern shown by photosynthate export capacity.

Many studies support the polymer-trapping model. For instance, the enzymes required to synthesize stachyose from sucrose are localized in intermediary cells. In melon, raffinose and stachyose are present in high concentrations in intermediary cells, but not in mesophyll cells. Down-regulation of raffinose and stachyose synthesis in purple mullein (Verbascum phoeniceum) results in the accumulation of carbohydrates in the leaves, reduced capacity to export sugar in prolonged darkness, and, in severely down-regulated plants, in impaired growth (McCaskill and Turgeon 2007). However, mass flow via plasmodesmata has also been proposed as a mechanism for symplastic entry of solutes into the phloem.

The type of transport sugar (sucrose alone or sucrose plus larger oligosaccharides) can differentiate between polymer trapping and the other loading strategies. Autoradiographs of leaf discs fed 14C-sucrose can then be used to distinguish between apoplastic loading and passive symplastic loading. In species which concentrate sugars in the phloem (apoplastic loading and polymer trapping), the veins should be clearly visible on the autoradiographs. In species which move sugars from the mesophyll into the phloem by means of diffusion down a concentration gradient, veins should not be visible on the autoradiographs. Web Figure 11.7.C confirms these expectations in the three loading types.

A number of species have more than one type of companion cell in their minor veins. For example, coleus has both intermediary cells and ordinary companion cells. It has been suggested that active and passive loading may coexist in some species, simultaneously or at different times, in different sieve elements in the same vein. However, symplastic and apoplastic pathways do not exist in the same sieve element-companion cell complex, due to restrictions imposed by anatomical features, such as plasmodesmatal frequencies.

Web Figure 11.7.C   Autoradiographs of leaf discs from species which load by polymer trapping (left, twining snapdragon, Asarina scandens), from the apoplast (middle, celery, Apium graveolens), and by passive diffusion through the symplast (right, cherry laurel, Prunus laurocerasus). The leaves were treated in a fashion similar to sugar beet (textbook Figure 11.15), except that the labeling period was one hour. Label (black) accumulates only in the species which concentrate sugars in the minor veins, by polymer trapping (left) and by active loading from the apoplast (middle). (Rennie and Turgeon 2009)