Topic 11.4 Nitrogen Transport in the Phloem

Topic 11.4 Nitrogen Transport in the Phloem

One of the most widely studied species in terms of nitrogen transport is the economically important soybean, a legume that has nitrogen-fixing root nodules. Research has shown that 12 to 48% of the nitrogen needs of the developing seeds of this species are supplied from compounds newly synthesized in the leaves, and 35 to 52% from compounds synthesized in the roots and transferred from xylem to phloem (Layzell and LaRue 1982). The remaining nitrogen probably comes from the breakdown of specialized storage proteins in the soybean leaf.

In a more recent study (Ohtake et al. 2001), non-nodulated soybean (Glycine max (L.) Merr.) plants were cultivated hydroponically under 5 mM NaNO3 (ample N supply) or 0.5 mM NaNO3 (deficient N conditions). 13N– or 15N– labeled nitrate was fed to the cut end of the stems, and the accumulation of nitrate-derived N in the pods, nodes and stems was compared. Real-time images of 13N distribution in stems, petioles and pods were obtained using a Positron Emitting Tracer Imaging System for a period of 40 min. (Web Figure 11.4.A) The results indicated that the radioactivity in the pods of N-deficient plants was about 10 times higher than that of plants that had sufficient N. The fact that the N translocation into the pods was much faster in N-deficient plants may be due to the strong sink activity of the pods in N-deficient plants. 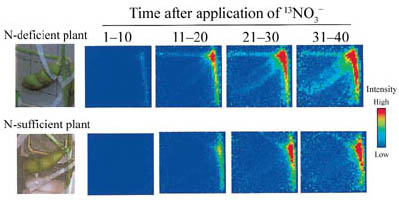 Web Figure 11.4.A   Images detected by Positron Emitting Tracer Imaging System around the pod position of the N-deficient and N-sufficient plants. Each image was the average intensity during 10 min. Note that in the 21-30 and 31-40 min. images of the N-deficient pod, the pod image becomes noticeable as radioactivity accumulates in the pod. No comparable image can be seen in the plant with ample N supply.