Since phloem tissue, like xylem tissue, consists of a mixture of conducting and nonconducting cells, identifying the material translocated in the sieve elements is challenging. Methods based on labeling with radioactive isotopes and direct extraction of the tissue do not distinguish between compounds in transit and those outside the translocation pathway.

The tendency of some species to exude phloem sap from wounds that sever sieve elements has been exploited to obtain relatively pure samples of the translocated material. The driving force for exudation is the high positive pressure in the sieve elements. However, most species do not exude detectable amounts of phloem sap, because of the sealing mechanisms closing wounds in the phloem (see textbook Chapter 11). However, exudation rates can be increased by treating the cut surface with the chelating agent EDTA (ethylenediaminetetraacetic acid) (King and Zeevaart 1974). Callose synthase—the enzyme that synthesizes the sealing compound, callose—requires the presence of calcium, and since chelating agents bind divalent cations such as calcium very effectively, they lower the calcium concentration available for callose synthase.

The major disadvantage of the wound exudation method is that the fluid collected may not represent the true composition of the translocated material. Contaminants can originate from damaged parenchyma cells or even from the sieve elements themselves, and the sap is generally diluted by water influx from the xylem. Furthermore, the abrupt lowering of turgor pressure in the sieve elements, as discussed in textbook Chapter 4, causes a decrease in the water potential of these cells. As a result, water from the surroundings enters the sieve elements along a water potential gradient, causing the phloem sap to become diluted.

The ideal way to collect phloem sap would be to tap into a single sieve element by using a tiny syringe. Fortunately, nature has provided just such a probe: the aphid stylet. Aphids are small insects that feed by inserting their mouthparts, consisting of four tubular stylets, into a single sieve element of a leaf or stem (Web Figure 11.3.A). The high turgor pressure in the sieve element forces the cell contents through the insect’s food canal and into its gut, where amino acids are selectively removed and some sugars are metabolized. The excess sap, still rich in carbohydrates, is then excreted as "honeydew" (the droplet seen exuding from the body of the aphid in Web Figure 11.3.A), which can be collected for chemical analysis. Sap can be collected from aphid stylets cut from the body of the insect, usually with a laser, after the aphid has been anesthetized with CO2. Exudate from severed stylets provides a more accurate picture of the substances present in the sieve elements than does honeydew (aphid excreta), the composition of which has been altered by the insect. 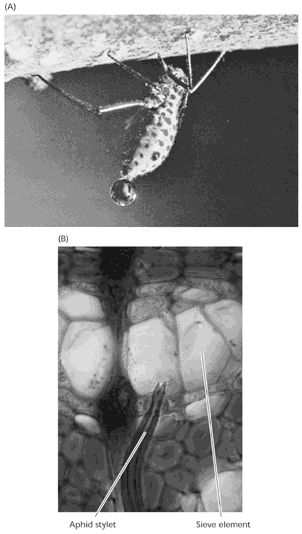 Experimental techniques using aphids have substantial advantages in the study of phloem physiology. Of particular importance is the fact that aphids tap a single sieve element, so there is no problem of contamination from other cell types. Exudation from severed stylets can continue for hours, suggesting that the aphid prevents normal sealing mechanisms from operating or that the drop in pressure that occurs when the sieve element is penetrated is not sufficient to trigger sealing mechanisms.

The disadvantages of using aphids include difficulties in placing the insects at a desired location and severing the stylets without disrupting them. In addition, aphids may induce reactions in the host plant by secreting saliva into the plant tissues. However, the magnitude of these reactions over the period of time necessary to collect sap for analysis is probably negligible.